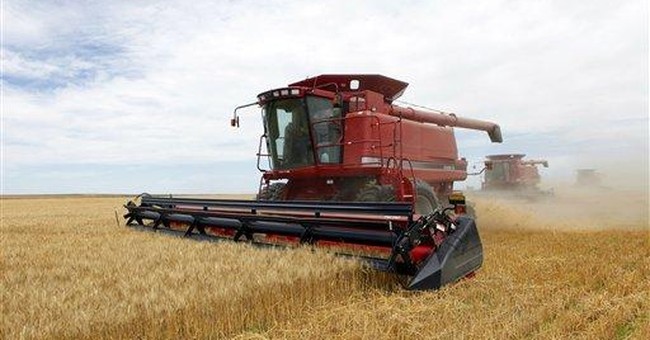 You’d be forgiven if, after reading the headlines last week from The Hill, The Week, NBC News, and the Associated Press, you scoffed at the notion Congress was rushing to reauthorize the President’s food stamp stimulus. Unfortunately, that is exactly what a large, bipartisan group of lawmakers is planning.

Last week, the House and Senate agriculture committees passed their versions of the so-called “farm bill.”

The Senate Agriculture Committee cleared the 1,150-page, $955 billion bill in just three hours. For those keeping count, that is one second for every $88.4 million authorized in the bill. The House committee was more deliberate, spending nearly 11 hours on their $940 billion bill.

Although the bills differ in some respects, roughly 80 percent of the spending in each is comprised of food stamp spending. What everyone calls a “farm bill” would more accurately be called the Food Stamp Reauthorization Act of 2013.

For a variety of reasons, including some poor policy decisions made during the Bush administration, food stamp participation and spending has been on the rise, even before the recession. However, the numbers have exploded during the Obama administration.

The number of Americans receiving food stamp benefits is nearly 48 million, up from 28 million in 2008. As a result, spending increased from $37 billion per year in 2008 to nearly $80 billion a year in 2012. The number of participants were not the only cost driver though, as the average individual benefit soared by nearly 30% during that time.

This is the legacy of the 2009 stimulus, which Vice President Joe Biden called the “proudest” accomplishment of the Obama administration.

Yet, for all the hand wringing about the stimulus and the exponential growth in food stamps, many lawmakers—far too many—seem content to support the House and Senate farm bills. These self-described conservative lawmakers will extol the virtue of the Senate’s $400 million cuts per year to food stamps and the House’s $2 billion cuts per year while failing to mention that taxpayers will still spend $80 billion this year on food stamps.

With much of the nation’s political reporting focused on the ever-expanding scandals, few Americans (and even fewer media-types) are paying attention to this nearly $1 trillion food welfare boondoggle. In Washington, the lack of attention serves as a catalyst for reckless legislating and a green light for growing government. Too many lawmakers believe they can escape accountability by pulling a fast one past a distracted public.

Some may question why the food stamp program is in the so-called farm bill. The Heritage Foundation explained:

Senator Thad Cochran (R–MS), the ranking Republican on the Senate Agriculture Committee, was a bit more candid. He told the North American Agricultural Journalists group that food stamps were an essential element of any farm bill “purely from a political perspective. It helps get the farm bill passed.”

That is exactly what he is hoping for this week when the Senate takes up the bill. An unholy alliance of big-government lawmakers – those who want food stamps and those who want farm subsidies – will provide the votes necessary to get the food stamp bill passed.

By rushing it through, Senators are hoping to apply pressure to their House counterparts who are more susceptible to the demands and concerns of their constituents. The longer the Food Stamp Reauthorization Act of 2013 is in the public eye, the harder it will be for lawmakers to convince their informed constituents the bill is just about protecting small family farms.

Speed and deception are tools of the trade for the proponents of big government. Blink and it will already be too late.