Dan Celia
|
Posted: Nov 02, 2017 12:55 PM
Share   Tweet
The opinions expressed by columnists are their own and do not necessarily represent the views of Townhall.com. 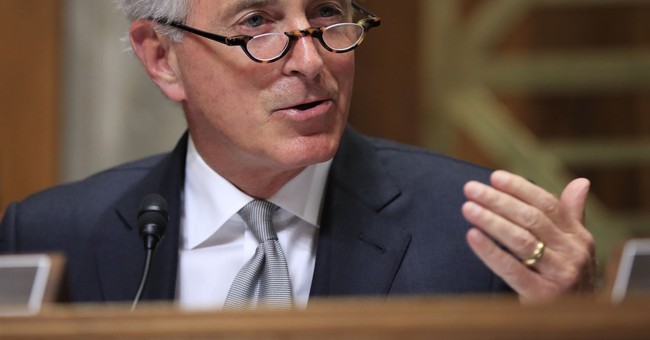 In 1787, our founding fathers sought to form a more perfect union and establish a government that would “secure the blessings of liberty to ourselves and our posterity.” They wanted a strong government of adequate—but limited—powers, building on those things outlined in a written constitution.

If our founders made any miscalculation, it was believing there would be continued levels of adequate national leadership. However, the problem may not be that our current leaders cannot fully discharge the duties of the offices they swore to execute. It would appear as though they have no clue what those duties might be, no leadership skills to execute them, and no desire to allow the Declaration of Independence and the U.S. Constitution to serve as their guiding lights.

Apparently, the guidance provided in our founding documents, coupled with the insistence of “we the people” that they carry out their duties, are just not adequate. Take, for example, Senate Minority Leader Chuck Schumer getting in front of the American people and arrogantly talking down to them. All of a sudden, he’s a deficit hawk, like so many other Republicans and Democrats who never cared a lick for the past eight years as they tried to spend their way into an illusionary prosperity. In case you missed it, they doubled our national debt.

The idea that President Trump’s tax plan is being postponed even one day—like it was earlier this week—does not show a House of Representatives that wants to do a thorough job. It’s about Republicans trying to figure out a way to stay on defense and try to appease the agenda of the left, which continues to frame the arguments and discussions.

When will Republicans actually do some work and commit to offense and push through these tax cuts? If they were such deficit hawks and cared so much about the American people, they would have already passed healthcare reform. Let’s consider the six years of no budgets and eight years of no concern for deficits—plus, spending 10 years on defense waiting for the next agenda that Nancy Pelosi, Harry Reid and now Sen. Schumer put forth. All the while, they should be on offense and do what is right for the American people.

I know that House Speaker Paul Ryan and others care more about their parliamentary processes than getting anything done for the American people. While they play defense, they continue to try to figure out how they can stay on course with their dog-and-pony show. This smoke-and-mirrors act is aimed at fooling the people who will decide whether to reelect these do-nothing, self-serving politicians.

These leaders have forgotten about any kind of fairness or accepting for themselves what they try to force upon the American people. Remember, these are politicians who saw no need to require themselves to sign up for Obamacare. That way, they could allow it to be as bad as possible. They are the same politicians who don’t worry about real wage increases for the American people as long as they satisfy the special interest groups and lobbyists.

They are the same folks who have been lying to us for 15 years, telling us that they actually have convictions about certain social, fiscal and national defense programs. These politicians believe that talking is actually working and getting things done. They continue to demean their voting base by convincing themselves the voters are ignorant and have no idea what is best for America.

These leaders believe they can simply speak eloquently and then go back to Washington after being reelected—and do nothing to offend the royal elites in the Republican Party who will meekly fall in line with the pompous establishment. They will quietly wait for the Left, as personified by Pelosi and Schumer, to set their agenda and frame their policies. Then they wait for the left-wing poll numbers to confirm that they need to just talk eloquently, stay on defense, and appease the special interest groups and lobbyists while pretending to care about their base.

Here is a wake-up call: as of last November, a different voter base exists. These royal elite Republicans will stand for election in 2018 before a group of men and women who deeply care about America. They will be on the ballot before a group of people who are ready, willing and able to take on a battle—with or without them. This is a group of voters who now realized they cannot win the war without the willingness to lose a few battles.

Such a stance is in direct conflict with a GOP that is so consumed with winning the war that they dare not have a battle and risk a loss. The Republican establishment has no backbone to stand on their convictions, which is needed to fight a battle. Senators Jeff Flake and Bob Corker are prime examples of two who were unwilling to stand or fight for what was right for their constituents. They were far too consumed with the elite establishment they desperately wanted to protect.

The American people are sick and tired of the comic relief that we get every time we hear another Republican congressman or senator stand up to talk about how unified the Republican Party is. Has anybody ever thought about asking them what exactly are they united around? Is it the flag, the Constitution, the good of the American people, the strength of American defense, creating jobs and pay raises or opportunities for prosperity?

I think not. This is a party that believes that no convictions, no show of strength, no unity, no worries about prosperity and no concern for protection of future generations somehow represents a strategy for winning a war—a war that, frankly, they’ve already lost.

Can we now see conservatives grow some backbone, stand on their convictions and do what is right? It seems more doubtful with each passing day. Can we at least get tax reform passed so, in the midst of the growing prosperity in America that will follow, we can then go about the business of voting them out? No more postponements, no more divisive debating over protecting the GOP establishment. Just vote for what is right for the American people, the economy and yes that means getting behind the president’s agenda that the American people voted for. Or, follow Flake and Corker.