The World According to Obama and Holder Boils Down to Race 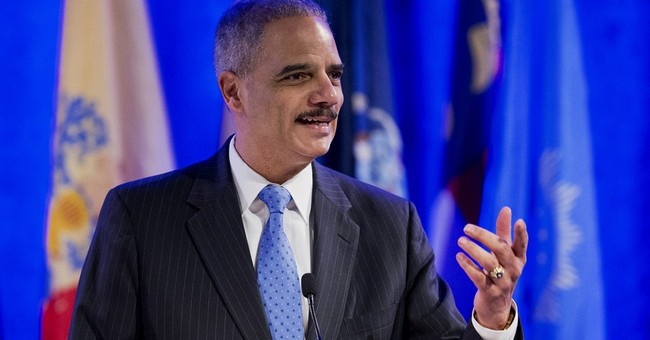 Speaking prior to Obama, Holder suggested to the all black crowd that both he and the president had been treated badly by Republicans because they are black.

The fact is, Holder has done a bad job as attorney general and unlike his fans within the black community like Sharpton, Republicans haven’t given him or Obama a free pass simply because their the first blacks serving in their roles. Remember Holder is the same attorney general who concocted the idea to give 9/11 terrorists a civilian trial in New York City, where the horror occurred.

Holder refused to respond to subpoenas over the Justice Department’s Fast and Furious botched gun-running scheme and as House Speaker John Boehner said, Holder refuses to get to the bottom of the IRS scandal or what exactly happened in Benghazi. Why not appoint independent counsels to investigate both?

In his April 11th remarks to the National Action Network, Obama declared blacks are still “woe is me” victims whose voting rights are being infringed upon with 21st voter ID laws.

“But the stark, simple truth is this: The right to vote is threatened today in a way that it has not been since the Voting Rights Act became law nearly five decades ago. Across the country, Republicans have led efforts to pass laws making it harder, not easier, for people to vote,” declared Obama.

How are laws that ask a person to verify his identity at the ballot box, racist? When you go to the bank and cash a check, you have to show a picture ID and when you board a plane or enter buildings in major cities like Washington or New York City.

Obama alleged, “It is wrong to make a senior citizen who no longer has a driver’s license jump through hoops and have to pay money just to exercise the rights she has cherished for a lifetime.” States with voter ID laws offer free state-issued IDs and many provide seniors with free transportation to places like the Department of Motor Vehicles that issue the IDs.

Democrats always love talking down to blacks, making the demeaning argument that blacks are disproportionately impacted by voter ID laws and somehow can’t get IDs to vote like whites. This is insulting.

Voter fraud does and can occur. When I voted recently in DC, I wasn’t asked to show an ID but just spout off my name and address. I could have just easily looked up a name and address in the phone book and voted as someone else.

Prior to the 1965 Voting Rights Act, and before that during Reconstruction, it was racist southern Democrats who suppressed the black vote with literacy tests, poll taxes, death threats and lynchings. Even though Holder and his Democrat cohorts love calling voter ID laws the modern Jim Crow, we don’t see any of that today.

If the voter laws in 34 states are racist, why did black voter turnout surpass whites in 2012?

Why did black voter turnout exceed white voter turnout after Georgia, Indiana and Tennessee passed strict voter ID laws, according to the US Census Bureau study “The Diversifying Electorate—Voting rates by Race and Hispanic Origin in 2012.”

Finally, if today’s voter ID laws are truly racist why in 2013 did the Supreme Court rule the preclearance section of the Voting Rights Act was unconstitutional? In its ruling, the court said that voting rates for blacks in former racist southern states were not only equal to whites but in some states surpassed whites.

It’s not surprising Obama would misrepresent the facts about voter ID laws to Al Sharpton’s all black National Action Network crowd. Good old Al’s organization is nothing but a front group to help Sharpton line his pockets with profit all in the name of falsely accusing businesses, governments and people of racism.

If someone didn’t know which century he was living in and only heard Obama and Holder’s speeches, he wouldn’t believe America had elected the first black President of the United States, not once but twice. That same person also might not imagine the country had its first black attorney general. Yet in the face of this reality, the dynamic duo of Obama and Holder keep misleading black Americans and distorting the strides our country has made 50 years since President Lyndon B. Johnson signed the Civil Rights Act into law.