It Is the Character, Stupid 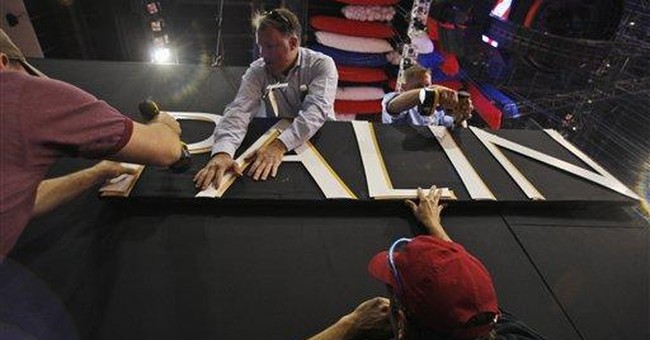 When he was running for President in 1952, an excited supporter told Governor Adlai Stevenson, “All the intelligent people are voting for you” to which Stevenson quipped, “Yes Ma’am, but I need a majority.” Stevenson was hammered in two elections by the object of the liberals’ derision, five star General Dwight Eisenhower.

Stevenson’s supporters also betrayed their cultural elitism by smarmily joking that Eisenhower could not read if his lipped were chapped.

All too openly, the Keith Olbermans of the world are making fun of Palin over things they either do not understand or believe they understand all too well.

She is—horrors of horrors---not only married to the same man, she also proudly pronounces him to be her hero. How unsophisticated.

Her idea of the out-of-doors is not a stroll through Central Park after a gourmet meal at Tavern on the Green but hunting and fishing in Alaska. She is a “Hockey Mom”—a North American sport in which it is permissible to use ones hands and not a European “Soccer Mom” in which not only are hands not allowed to be used but also in many leagues, neither is cheering by the parents or keeping track of the score allowed.

She wears dresses and high heels; in the words of an old perfume commerical, bringing home the bacon, frying it up in a pan and with five children, never letting her husband forget he was a man; she goes to church each Sunday and according to one elitist recently quoted, she has never appeared on “Meet the Press.” Never was there a greater self-indictment of the elites in America issued than this one statement.

Contempt for the “real people” by the elites in America is not a new phenomenon. Lionel Trilling, a liberal icon of the 50’s, famously said conservatism was not an ideology but a series of unintelligible grunts and gestures.

In 1964, a partially successful attempt was made by the campaign of Lyndon Johnson to portray Barry Goldwater as unbalanced. Curious in that LBJ was a notorious womanizer, boozer, racist and nest liner. Yet the elites deemed him the sophisticated one in the race.

In 1980, Ronald Reagan was assaulted as, “a grade B actor with premature orange hair” and this came from the elites in his own party. The GOP’s liberal elite then engaged in a “corrupt bargain” with many in the media to attempt to destroy Reagan’s last grasp as the ring and almost succeeded. Piling on was Jimmy Carter, who said that Reagan would divide America, “Christian from Jew, Black from White and North from South.” Carter, who ironically had come to Washington in 1976 contemptuous of the “Beautiful People” of Washington and New York---adopted their contempt of Reagan and tried to win by making fun of Reagan and all he represented---including what millions of Americans happened to agree with Reagan on about government, families, faith, community, privacy and individuality. Reagan of course smashed Carter in the fall elections.

Can anyone forget the audible snickering by Al Gore in his first debate with George Bush in 2000? How many of these elitist and impolite snickers cost him the populist and polite voters in the state of Florida?

The problem the Democrats have always to deal with are their “educated elites” and their influence over the rest of the party. Since these elites only talk to one another, they therefore think this is how the rest of America thinks. Therefore, it stands to follow that if Jonathan Alter and Rachel Maddow think Governor Palin is “tacky” it then goes that everybody in America must also think she is “tacky.”

When the Democrats resisted the smarmy elites, as in 1960 (John Kennedy always was contemptuous of the crowd around Eleanor Roosevelt) 1976 and 1992 and ran populist campaigns, they won the Presidency. When they ran elitist campaigns, as in 1972, 1980, 1984, 1988 (the “Belgian Endive” versus fried pork rinds campaign) and 2000, they lost.

No doubt that the McCain campaign has botched Palin’s rollout. Clearly, nothing was planned after the Friday announcement to define her to the GOP and the voting public. So a series of mini-cuts are slowly bleeding her, damaging her first and only chance to make a good first impression. Had the campaign thought about it, they would have given her an immediate mission or signature issue---as Carter did with Walter Mondale in 1976 (open closed union doors) or as Reagan did in 1980 with Bush (beef up the foreign policy portfolio of the ticket).

Sadly, they did not do this which has left her vulnerable to attacks by supporters of Obama. My impression is they will not work on this tough lioness. She still has time to define herself before her enemies and the incompetence of the GOP define her.

The Americans who live in the “fly over country” ridiculed by the elites are not disappointed in Sara Palin because her 17-year-old daughter is pregnant. They would be disappointed if Governor Palin and her husband Todd encouraged their daughter to have an abortion. They are not disappointed over Palin’s accused mistakes but would only be upset if she did not own up to them.

She still has time to make an appeal to the conservative majority in this country, something a Joe Lieberman or Tom Ridge could never do. By picking Palin, McCain has narrowed the ticket’s appeal and thus potentially broadened his base. A “McCain-Lieberman” ticket would not only have seen one third of GOP delegates stream for the Minneapolis airport, it would have been decimated in November, as a listless and meaningless ticket of two men who agree almost nothing. How compelling is that? The elites would have liked it---Populist America would have hated it.

What most Americans understand is that---as Hamilton, Jay and Madison argued in the Federalist Papers—this is all about character. These contests are not about whether the candidates have clay feet but whether they aspire to lead the country and address those issues surrounding the future and the future for the children of America that matters most to them.

And that these things are not just about experience---after all, would anybody vote for the experience heavy Richard Nixon or LBJ for President today---but also about judgment. They know it is not about the avoidance of adversity but how one handles that adversity which counts.