Letter From Pennsylvania: We Must Right the Flailing Public Education Ship

Colin McNickle
|
Posted: Mar 08, 2017 9:50 AM
Share   Tweet
The opinions expressed by columnists are their own and do not necessarily represent the views of Townhall.com. 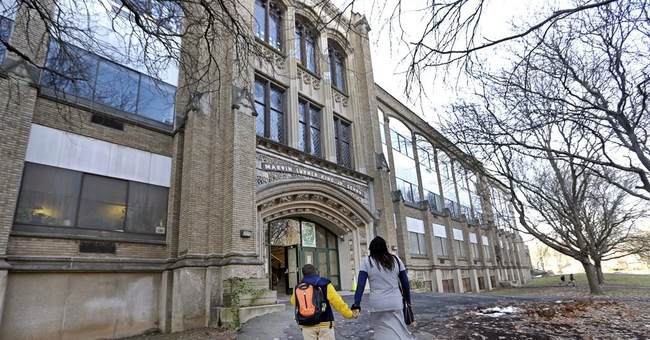 The transfer of middle and high school students in the Wilkinsburg School District into Pittsburgh Public Schools is raising some significant, and troubling, questions about not only this particular arrangement but about the state of education in Pennsylvania, say scholars at the Allegheny Institute for Public Policy.

Flagging enrollment in grades seven through 12 led to an agreement by which Wilkinsburg Middle/High School was closed at the end of the last school year and approximately 270 students, beginning this school year, were folded into Pittsburgh Public Schools’ Westinghouse Academy. The deal runs through at least the 2021-22 school year.

But think tank scholars Jake Haulk and Eric Montarti (in Policy Brief Vol. 17, No. 12) say the most important question is why the Wilkinsburg school board thought sending its students to Westinghouse was in the best interest of students or taxpayers funding their education.

“Westinghouse Academy has an educational achievement record that is on par with terrible results posted in Wilkinsburg,” Haulk and Montarti remind. And it’s not as if there weren’t alternatives.

“Hiring a reputable private school operator would have been one,” say Haulk, the institute’s president, and Montarti, a senior policy analyst there. “Giving parents money for scholarship vouchers to attend other schools of their choice would be another very good option.”

But the transfer of Wilkinsburg students raises additional and substantial financial questions, as well as those involving state oversight, the researchers say.

To wit, the Pittsburgh school district is charging the Wilkinsburg district $8,000 per pupil, well under the per-pupil amount being spent in each district. That amount is scheduled to increase to $9,600 next school year and expected to be nearly $10,600 by the final year of the current agreement.

Considering Wilkinsburg was spending more than $24,000 per student prior to the deal, it should be enjoying substantial savings from the arrangement, Haulk and Montarti point out.

“Will the state, seeing the big drop in per student costs for the (Wilkinsburg) students, lower the commonwealth’s allocation to the district?,” they ask. “And, will it raise questions about (Pittsburgh’s) expenditure level -- of more than $23,000 annually -- if it can teach Wilkinsburg students for the amount (it is) charging?”

Additionally, the state funded the transition with $3 million. Why can’t the cost savings be used to pay that bill?

More pointedly, if the 270 transferred students were costing Wilkinsburg $6.5 annually prior to the transfer agreement and are now costing the district less than $3 million -- even allowing for reasonable administration and transportation expenses -- “where is the rest of the money going and why are $3 million more in state dollars required?,” the institute asks.

Haulk and Montarti say the Pennsylvania Department of Education’s decision to even allow Wilkinsburg to send its students to a school as academically inadequate as Westinghouse is inexcusable.

“Of course, this is the same department that has done little to nothing to fix the calamitous educational attainment situation that describes the majority of schools in Philadelphia, Harrisburg, Pittsburgh and several other  districts across the commonwealth,” they remind.

The state Department of Education needs stronger guidance and, if required, additional authority from the Legislature and the governor to achieve better outcomes in the face of the kinds of totally unacceptable  school  performance seen in so many Pennsylvania schools, Haulk and Montarti say.

“But therein lies the problem,” they lament. “Legislators have shown little interest in real solutions for failing schools -- probably because of the enormous pushback from teacher unions and the public education establishment that seeks to protect its authority.

“Meanwhile, tens of thousands of students are graduating or dropping out of school barely literate after costing taxpayers a hundred thousand dollars or more per student for their pathetic education,” Haulk and Montarti conclude.

And that, sadly, is a most severe indictment of Pennsylvania’s public education system.