Cliff May
|
Posted: Apr 20, 2016 9:50 AM
Share   Tweet
The opinions expressed by columnists are their own and do not necessarily represent the views of Townhall.com. 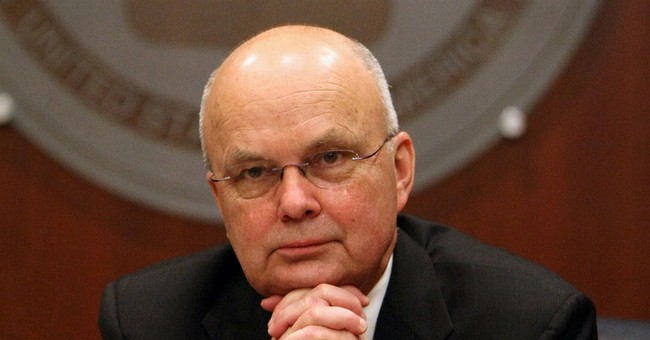 After a long and extraordinary career, Gen. Michael Hayden has written “Playing to the Edge: American Intelligence in the Age of Terror.” Both a memoir and a primer on modern espionage, it also attempts to correct the historical record and maybe settle a few scores. Nothing wrong with that, if you ask me.

Readers of this column are probably familiar with Gen. Hayden but to refresh your memory: He is a proud son of Pittsburgh and an avid Steelers fan. His father was a welder. He studied history at Duquesne University where he joined the Air Force ROTC. Commissioned as a second lieutenant, he was drawn into military intelligence, eventually earning four stars.

In 1999, President Bill Clinton tapped him as director of the National Security Agency, America’s largest spying shop, responsible for collecting signals intelligence. In 2006, he became director of the Central Intelligence Agency. He held that job under President Barak Obama – for three weeks.

What he’s learned in a microdot: “The world is not getting any safer, and espionage remains our first line of defense.” If those sound like truisms, note that prominent groups and individuals vehemently disagree. The American Civil Liberties Union has called the NSA an “extreme threat to the privacy of people all over the world.” President Obama repeatedly insists that “the tide of war is receding.”

“Playing to the edge” is Gen. Hayden’s sports metaphor for being aggressive when it comes to the long war against jihadis and other enemies. Yes, there are legal and ethical lines that should not be crossed. But if you don’t get a little chalk on your cleats, you’re not fighting to win.

Both at the NSA and in his book, Gen. Hayden refutes the claim that American spies are listening to your phone calls and reading your emails. He recalls Sen. Arlen Specter, at the time a Republican, later a Democrat, asking: “But how do you protect privacy?” Gen. Hayden began to explain how careful the NSA is not to eavesdrop on Americans. The senator interrupted: “No, everyone’s privacy. Foreigners’ privacy.” Gen. Hayden was tempted to point out that the Fourth Amendment is not an international treaty but he held his tongue -- until now.

A few years later, Vice President-elect Joseph Biden attended a briefing on CIA renditions: “the extrajudicial transfer of someone to a third party.” Director Hayden emphasized that the United States has “moral and legal responsibilities” to the detainees, even in their new location.

“Oh, come on, General,” the VP-elect suddenly interrupted, “you shipped them to these places to rough them up so you could get information.” Gen. Hayden responded: “Mr. Vice President-elect, that’s simply not true. And now that I’ve told you that, you need to stop saying it.”

It soon became clear that the Obama administration intended to prosecute CIA officers for actions that their superiors and the Justice Department had assured them were legal and whose only purpose was to obtain information that could save American lives.

Gen. Hayden was particularly distressed by the decision to release the “torture memos” which, as I’ve argued for years, were really “do-not-torture memos.” They drew a line that CIA interrogators were not permitted to cross. You can say they didn’t draw that line where you think it should have been drawn. But it is simply false to say the memos were not based on serious legal reasoning and precedent; false to say they granted license to do anything to get captured terrorists to talk.

Central to the controversy over “torture” was waterboarding. It was used on only three individuals: Khalid Sheikh Mohammed, Abu Zubaida and Abd al-Rahim al-Nashiri. All were senior al Qaeda terrorist masters with blood on their hands and intimate knowledge about plots being hatched, where and by whom. In each instance, this coercive interrogation technique was performed in a regulated manner so as not to cause death or permanent harm. And the subjects could end the sessions at any moment simply by agreeing to answer questions truthfully.

No one was waterboarded after 2003, three years before Gen. Hayden moved to CIA. But it became clear to him that waterboarding had succeeded in producing useful intelligence. He is hardly alone in coming to that conclusion. It also was acknowledged by Dennis Blair, President Obama’s Director of National Intelligence. In a message sent to the entire intelligence community, he confirmed that “high-value information” came from such interrogations. ” Those words, Gen. Hayden reports, “were mysteriously removed from the version of Blair’s note that was released to the press.”

Multiple investigations dragged on for three long years, ending with no criminal charges. Nevertheless, the Obama administration – Gen. Hayden puts much of the blame on Attorney General Eric Holder – opened a wound that has yet to heal.

Today, not just waterboarding but all stress-and-duress interrogation techniques have been prohibited. Today, there “are no circumstances of threat under which the president will allow us to interrupt the sleep cycle of a terrorist even if it would help get at lifesaving information.”

In a way, it’s a moot point: No terrorists are being captured. Although President Obama has not been not reluctant to use drones for the purpose of targeted killings, he has preferred not to take terrorists into custody.

Gen. Hayden believes that’s a mistake. Dead terrorists tell no tales. The tales they aren’t telling could help us prevent attacks and, in time perhaps, win the war against the determined and ruthless enemies of free peoples -- and those who might hope someday to be. The world is not getting safer. In this book, Gen. Hayden lays out some of the reasons why.