Napoleon in the Middle East 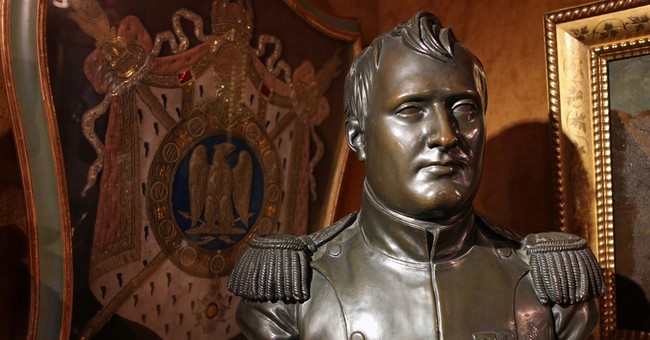 A few pages into “Napoleon: A Life,” historian Andrew Roberts notes that the great general regarded himself as “of the race that founds empires.”

How odd that sounds to modern ears. But, of course, in the past, people viewed the world differently. Most of us get that. In the present, not everyone sees the world the same way. Many of us don’t get that.

And so Secretary of State John Kerry responds to Vladimir Putin’s seizure of Ukrainian territory by exclaiming: "You just don't in the 21st century behave in 19th century fashion by invading another country on completely trumped up pre-text!"

And so within the foreign policy establishment it is widely assumed that those who send suicide-bombers to kill us must harbor “legitimate grievances,” and that they, like us, would prefer peace to war, and are eager, as we are, to resolve conflicts diplomatically, with both sides accepting compromises.

These are dangerous illusions. Throughout most of history, war has been the norm, peace the exception. Pursuing victory and conquest, founding empires – these were seen as noble pursuits.

Abu Bakr al-Baghdadi is self-evidently among those who hold such views today. He has declared himself caliph of the Islamic State: spiritual, political and military ruler of the world’s Muslims, heir to Mohammad who founded the first Islamic empire.

Al-Qaeda, from which the Islamic State splintered, has similar goals, though AQ leader Ayman al-Zawahiri, like AQ founder Osama bin Laden, believes the first order of business is to collapse America’s infidel empire. That achieved, the restoration of Islamic power and glory surely will follow.

Ali Khamenei, Supreme Leader of the Islamic Republic, has a different strategy: He intends to utilize Iran’s immense oil wealth – and, eventually, a nuclear weapons capability -- to ensure that Shia, rather than Sunni, Muslims rule the Middle East and beyond.

Can such empire builders be compared to Napoleon? No – not even if their territorial conquests someday match those of the Emperor of the French. As Mr. Roberts makes clear, Napoleon’s claim to greatness rests not only – or even primarily – on the battlefield.

More important: He spread the “ideas that underpin our modern world—meritocracy, equality before the law, property rights, religious toleration, modern secular education, sound finances” as well as “rational and efficient local administration, an end to rural banditry, the encouragement of science and the arts, the abolition of feudalism and the greatest codification of laws since the fall of the Roman Empire.”

Contemporary jihadis, by contrast, are building nothing, teaching only religious dogma, slaughtering, enslaving and oppressing those they conquer, while imposing medieval readings of sharia, Islamic law.

Mr. Roberts’ newly released biography of Napoleon is compelling, incisive and surprising. Those who, like me, focus on the threat of Islamic imperialism in the 21st century will find the chapters recounting Napoleon’s campaign in the Middle East most instructive.

The Ottoman Empire, which was also the last caliphate (the Islamic State notwithstanding), conquered Egypt in 1517. But by the time Napoleon’s forces landed in 1798, “de facto control,” Mr. Andrews writes, “had been long wrested from them by the Mamluks, a military caste originally from Georgia in the Caucasus.”

Napoleon’s primary strategic interest was neither Turks nor Caucasians: It was British naval superiority in the Mediterranean and what was then called “the Orient.”

In his relations with the Egyptians, Napoleon was “particularly careful to give no cause for a jihad.” He ordered his men to deal “with them as we dealt with the Jews and with the Italians. Respect their muftis and imams as you respected rabbis and bishops.”

He also attempted to incite Egyptians against the Mamluk “usurpers” whose “Empire shall be no more! … I reverence …God, his prophet Muhammed, and the Koran!” he proclaimed.

“Napoleon respected Islam,” Mr. Roberts writes, “regarding the Koran as ‘not just religious; it is civil and political. The Bible only preaches morals.’” However, “no amount of complying with Islamic ceremonies, salutations and usages prevented Selim III [the Ottoman emperor] from declaring jihad against the French in Egypt, meaning that any attacks upon them were thenceforth blessed.” The Mamluk ruler, Murad Bey, also pledged to slaughter Frenchmen, to “sever their heads from their bodies like watermelons.”

When a Turkish army gathered in Syria to prepare an attack, “minarets across Cairo rang out with a call for a general uprising against French rule.” An intense battle ensued. Napoleon’s officers “did not hesitate to put fifteen cannonballs into the Grand Mosque which was later stormed by infantry and desecrated. Over 2,500 rebels died” with more executed after. Beheading was among the “exemplary punishments” Napoleon insisted be “meted out to the rebellious.”

Having suppressed the insurrection, Napoleon went on to “chase the Mamluks out of Gaza City” and lay siege to Jaffa after its governor refused to surrender, defiantly “displaying the head of Napoleon’s messenger” on a pike.

Additional battles followed in Acre, Safed and Nazareth. Finally, the defeat of Turkish and Mamluk forces in the Battle of Tabor left Ottoman “hopes of reconquering Egypt wrecked.” But these clashes also marked the end of Napoleon’s dream of reconquering Constantinople – the Christian capital conquered by the Ottomans in 1453 -- and moving beyond to displace English rule in India.

Years later, Mr. Roberts notes, Napoleon “summed up his glorious aspirations, claiming: ‘I would found a religion, I saw myself marching to Asia, mounted on an elephant, a turban on my head, and in my hand a new Koran that I would have composed to suit my needs.’”

John Kerry might find all that terribly 19th century. Many in today’s Middle East would understand exactly what the Emperor had in mind. The question that remains: Do we have the imagination required to understand?