Murder on the Democracy Express 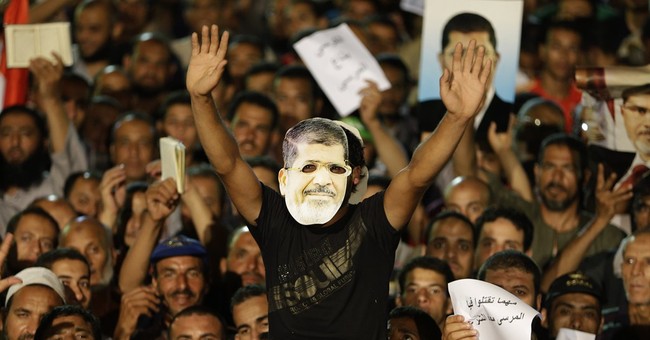 Egypt’s military is, of course, the prime suspect. The “world has witnessed many such putsches in the past half-century,” writes the Washington Post’s Jackson Diehl. The “ultimate losers . . . will be those who cheered it on.”

Bloomberg’s Jeffrey Goldberg is among those charged with waving pom-poms. “There are so many good reasons to be happy and grateful for the latest turn of events in Cairo,” he wrote. “The Brotherhood’s most vicious war was on women. It has also been working assiduously to marginalize, and even terrorize, Egypt’s Christian minority.”

Somewhere between the two is former British prime minister Tony Blair: “The events that led to the Egyptian army’s removal of President Mohamed Morsi confronted the military with a simple choice: intervention or chaos.”

Then there are those making the case that there was no Egyptian democracy to kill -- it was just a mirage. “Liberal Americans,” writes Mark Steyn, “casually assume that ‘developing countries’ want to develop into something like a Western democracy. . . . The Brotherhood was checked -- but not by anything recognizable as the forces of freedom.” Adds Andrew C. McCarthy: “In Egypt, at this stage of its development, liberty lovers remain outnumbered. The massive protests against the Muslim Brotherhood administration are an encouraging sign that Egypt’s democrats are growing in strength, but they should not be mistaken for a wholesale rejection of sharia supremacism.”

I would charge Morsi with democracide. He fatally wounded Egypt’s democratic experiment long before the military stepped in. He posed as a democrat to win an election, then governed as a majoritarian -- sometimes defined as one whose notion of representative government is two wolves and a lamb voting on what to have for dinner.

Determined to transform Egypt into the Muslim Brotherhood version of an Islamic state, Morsi grossly violated minority rights and the independence of the judiciary, jailed journalists for “insulting the president” -- in free societies that’s a habit, not a crime -- ignored the rule of law, and prosecuted Americans who had come to Egypt to help promote democracy.

Egyptians might have tolerated all that and more had Morsi not undermined foreign investment and tourism, two unsteady pillars of Egypt’s economy. That, in turn, spread destitution and hunger at an alarming rate.

Adding insult to these many injuries, Morsi appointed a member of Gamaa Islamiya as the governor of Luxor, the ancient city where 58 foreign tourists were murdered in 1997 -- by members of Gamaa Islamiya.

Reluctantly but rightly, the New York Times’ David Brooks has come to the conclusion that the Muslim Brotherhood and other “radical Islamists are incapable of running a modern government. Many have absolutist, apocalyptic mind-sets. They have a strange fascination with a culture of death. . . . Once in office, they are always going to centralize power and undermine the democracy that elevated them.”

There are those who argue -- as has columnist Eugene Robinson -- that Morsi nevertheless “honored the terms of a peace treaty with Israel,” thereby setting “an extraordinary example for the rest of the Muslim world.” Bosh. At this point in time, Egypt’s military is in no position to fight another war. Had Morsi been so foolish as to order Egypt’s generals to attack the Jewish state, they would have laughed in his face -- if he were lucky.

An Egyptian civil war, however, is suddenly not unimaginable. On Monday, Egyptian soldiers fired on a crowd of pro-Morsi protesters, killing more than 50. Also on Monday, the Middle East Media Research Institute (MEMRI) posted a video showing Morsi supporters throwing opponents off a roof. Vengeance will be sought. The voices urging calm may prove unpersuasive.

The Foundation for Defense of Democracies’ Reuel Marc Gerecht argues that it would have been much better -- that Islamism would have been much more profoundly discredited -- had voters rather than soldiers turned Morsi out of office. I agree -- though I somehow doubt Morsi would have quietly packed his bags and waited for the taxi.

General Abdul Fatah al-Sisi, chief of Egypt’s armed forces, has announced a “roadmap” out of the crisis. It is to begin with the formation of a civilian, technocratic government and a committee drawn from a wide political/ideological spectrum -- Islamists included -- to rewrite the constitution. That would be followed by a referendum as well as parliamentary and presidential elections. Call it Egyptian Democracy 2.0.

Should the U.S. support this effort? What, realistically, is the alternative? President Obama appears to see it that way too, which is why he’s trying to circumvent a U.S. law banning funding to any country where a democratically elected government has been overthrown by a military coup or decree.

The Wall Street Journal agrees with Obama -- not something you see every day -- pointing out that America’s $1.3 billion in annual military assistance buys “access” to Egypt’s generals. I would only add that access should not be confused with influence. If it becomes clear that we don’t have the latter -- not just on economic policies but also on guaranteeing human rights for Christians and other minorities -- it may be time to stop paying for the former.