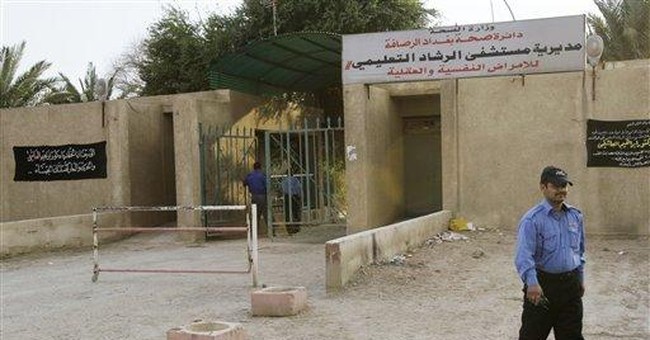 It’s time Iraq’s leaders began to shoulder more responsibility. So why are those who have been making this case longest and strongest standing in their way?

Here’s the situation: American forces in Iraq today operate under the authority of a Chapter 7 U.N. mandate. As long as that mandate is in place, Iraq has “diminished sovereignty,” a status the country’s elected leaders find demeaning -- as well they should.

The mandate expires at the end of the year. At that point, Iraq’s leaders want normal relations with the United States: “Bilateral arrangements agreed to by two sovereign nations,” as Iraq’s ambassador to the U.S., Samir Sumaidaie, recently phrased it.

With that in mind, American diplomats plan to begin talks on a Strategic Framework Agreement to shape the two nations’ security, diplomatic, and economic relationship. Negotiations in pursuit of cooperation: Who could oppose that?

The answer is MoveOn.org – the group that infamously called General David Petraeus, the U.S. commander in Iraq, “General Betray Us” — as well as MoveOn’s followers and fans in Congress.

Their arguments range from the specious to the slanderous. In the latter category, MoveOn charges that the Bush’s goal is to provide a “huge windfall” for “U.S. investors” from Iraq’s oil wealth. Baseless as that obviously is, it helps stir anti-American anger in the Middle East which, for MoveOn, is no doubt a plus.

House Speaker Nancy Pelosi and Senators Hillary Clinton, Chris Dodd and Barack Obama haven’t gone that far -- but neither have they criticized MoveOn for doing so. Instead they have been railing against what they say are President Bush’s plans to establish “permanent” American bases in Iraq.

But senior administration officials have said repeatedly that whatever bases the U.S. operates in Iraq are not to be permanent -- they will remain only as long as Americans and Iraqis find them mutually beneficial.

For now, at least, it is surely in the American interest to continue the mission Gen. Petreaus and his troops began a year ago this month: confronting al-Qaeda cells and Iranian-backed militias in Iraq. Among Petraeus’ key insights was that killed, captured and fleeing terrorists can’t stoke civil wars – and, indeed, sectarian violence in Iraq has been dramatically reduced since the “surge” of operations against al-Qaeda and Iran’s proxies began.

Over the same period, Iraqis have been learning to defend themselves: According to Ambassador Sumaidaie, more than 70 percent of the military operations now underway in Iraq are led by Iraqi forces supported by U.S. troops, rather than the other way around.

Nor does putting an agreement in place “constrain the next administration's options,” as one blogger quoted by MoveOn alleges. If President Bush’s successor wants a different agreement -- or no agreement at all -- there is nothing to stop him (or her) from making that decision.

But if Bush does manage to forge a stable working relationship with Iraq, he will have done a great favor for the next president. And leaving a larger rather than a smaller force in Iraq would particularly benefit a President Obama or Clinton. Why? Because that would allow Obama or Clinton to bring home more troops earlier – and take the credit -- without risking the substantial gains that have been made since the Petraeus mission began.

The last thing a Democrat entering -- or returning to -- the White House should want is to face a crisis in Iraq, with American troops operating in limbo, and Iraqi leaders angry at having been told to hurry up and wait by squabbling American politicians. What an opportunity that would be for al-Qaeda and Iraqi militias to test a new president’s mettle by seeing if they can’t take back some of the ground they’ve lost.

MoveOn’s hyper-partisans -- deeply invested in seeing Bush (and America) defeated in Iraq -- may prefer such a scenario to diplomacy, cooperation and increased Iraqi freedom and independence. But no politician who is either savvy or principled – of either party – should stand with them.