The Rest of the 'Unbroken' Story (Part 2) 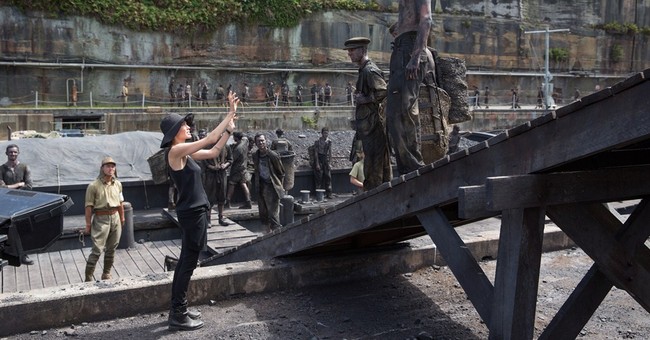 Last week, I began to explain the spiritual power behind World War II prisoner of war hero Louis Zamperini, whose amazing life is retold in the movie "Unbroken." This week, I want to discuss what his adult children are saying about how his faith is portrayed in the movie and give further details to show just how deeply it permeated his life.

Movie viewers and pundits are debating Zamperini's spirituality and whether or not the movie depicts it accurately. Fox News asked, "Where's the rest of Louis Zamperini's story?" The Christian Broadcasting Network reported that the movie "does not portray his salvation experience during a 1949 Billy Graham crusade in Los Angeles."

At a media day for the movie, Zamperini's daughter, Cynthia Garris, explained that her father was fine with the compromised message in the film, saying, "He had a very specific philosophy about this film. If Jesus Christ came up in the film, if that was the message specifically, then it would be a film made for Christians, and other people may not want to see it if they're not ready to have that message."

She continued: "His philosophy was he wanted as many people to come and see the movie as possible. ... If they wanted to know more about how he got through it, how he survived it, they can investigate his faith further. ... He never wanted to preach at them. He wanted to live the example."

Unfortunately, Louis passed away before the final editing of the film. USA Today reported that Louis only watched "a lot of scenes" of "Unbroken." And according to a recent interview with Zamperini's son, Luke, by John W. Kennedy, the founder of The Creative Universe Entertainment, Louis "didn't see the entire film in its final cut."

At the media day, Luke explained just how pivotal his father's faith was: "Billy meant a whole lot to my dad. When he met Billy Graham and heard him speak, his life really changed for the better. Billy introduced my father to his Lord and savior, Jesus Christ, and that is what turned my father's life around finally and completely to a life of service and turned him into the happy, joyful person he was, after going through the post-traumatic stress disorder that he went through during and after World War II."

Luke wrote in a column: "It was only when, at the urging of my mother, he attended a Billy Graham crusade in 1949 and surrendered his life to Jesus Christ that my father truly became unbroken. The nightmares stopped. So did the drinking. And he dedicated the rest of his life to serving others -- especially wayward kids, through the establishment of his nonprofit organization, Victory Boys Camp Inc."

The fact that both of Zamperini's children recently entered the debate about the film's spiritual accuracy shows me that something was amiss. So I sought "the rest of the story" for myself, and I was surprised to discover just how bold and faith-filled Zamperini really was.

He shared his inspiring Christian testimony at several of Graham's crusades, including one in San Francisco (1958) and one in Los Angeles (1963). In June 2011, he visited Graham at his home in Montreat, North Carolina.

Here's another example of how Zamperini expressed his faith over the decades: "I believe it with all my heart that 'all things work together for good for those who love the Lord -- for those who are called according to His purpose.' Christ told us in the Scriptures, 'I am the way. I am the truth. And I am the life. He that cometh to me I will in nowise cast out.' Christ is the way to God. ... People are always seeking truth. Well, the truth is Christ. ... Our eternal life starts now by faith in Jesus Christ. And so that is the strength we live by, and death no longer has a sting, not to the Christian."

Even death lost its war against Zamperini, when he put in for his change of address to heaven July 2. Far from those Japanese war camps, he's now enjoying a heavenly mansion, where there's no longer any pain, grief or sorrow.

As Graham eloquently explained in his latest book, "Nearing Home," "we were not meant for this world alone. We were meant for Heaven, our final home. Heaven is our destiny, and Heaven is our joyous hope."

The triumph of Zamperini's Christian redemption remains the epic moment in his earthly life. That fact is what prompted Kenneth Turan, a teacher at the University of Southern California who reviews movies for the Los Angeles Times and NPR, to offer this recent critique: "In real life, Zamperini's postwar story has a tremendous ending. He endures years of alcoholism and PTSD before a religious awakening, inspired by Billy Graham, changes his life. Yet the film relegates this drama to a few brief seconds of text on-screen. This decision wreaks havoc with the story's equilibrium, making 'Unbroken' into a drama about torture, not redemption. The result is a film we respect more than love, and that's a wasted opportunity."

I saw "Unbroken" after writing last week's column. The movie ends upon Zamperini's return home from captivity in Japan. The film is not about his PTSD or years of alcoholism or his conversion to Christianity. That is another story.

To ensure that moviegoers understand the full impact of Zamperini's faith, the Billy Graham Evangelistic Association released its own version of his life Dec. 25, "Louis Zamperini: Captured by Grace." To watch a preview or order the DVD, go to http://billygraham.org/landingpages/unbroken/?source=BT14CYZMP.