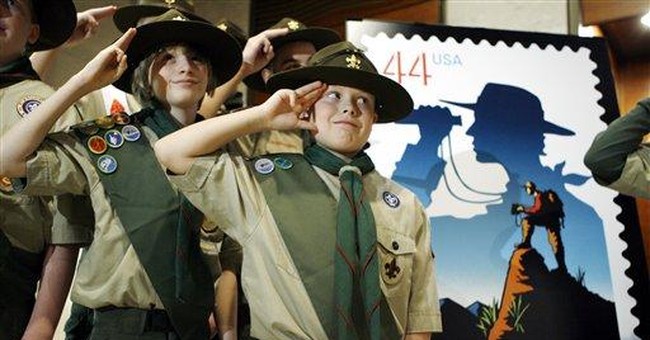 Last week, I discussed a series of evidences regarding how President Barack Obama is leading the White House pack in distancing his administration from the Boy Scouts of America.

As I pointed out, the White House has delayed Eagle Scout certificate signings, denied the invitation to go to the Boy Scouts of America's 100th anniversary gala, downplayed Obama's acceptance of BSA's honorary presidency, dodged official communications about the BSA, not defended the BSA against cultural attacks, and diminished Obama's all-around role as BSA's honorary president.

And to boot, Obama's administration has followed suit, collectively believing as progressives that the BSA is behind the times or too traditional and conservative.

For example, just a week after Obama denied the invitation to attend the BSA's gala in his own backyard (Washington, D.C.), on Feb. 12 White House press secretary Robert Gibbs was forced to discuss the Boy Scouts. But even then, as you'll see, Gibbs dodged questions about White House sentiment regarding the BSA.

It all started when reporter Les Kinsolving, WorldNetDaily's correspondent at the White House, asked Gibbs what the president thought about the New York Post's report that detailed the legal victory for the Scouts' right to exclude homosexuals from membership and how it had created a backlash in New York. The report said that institutions there are abandoning the Scouts and that authorities have barred them from meeting or recruiting in public schools.

The exchange between Kinsolving and Gibbs at that press briefing went like this (watch Gibbs' political tap-dancing maneuvers, for the president and himself):

Kinsolving: As the honorary president of the Boy Scouts of America, what is the president's reaction to the New York Post report that because the Scouts have a policy similar to our armed forces, "New York institutions are barring Scouts from meeting or recruiting in all public schools"?

Gibbs: I have not seen the New York Post report and can have somebody--

Kinsolving: Well, does he think that it's fair for them to cut the Scouts out of this? How does he support -- does he disagree with the Scouts or what? (Laughter.)

Gibbs: Where are you on this, Lester?

Gibbs: Yes, I do know where.

Gibbs: My son is -- we're constructing the Pinewood Derby car as we speak. (Laughter.)

Kinsolving: He's a Scout? Your son is a Scout?

Gibbs: He is, and I think he's going to be disappointed if his car doesn't do well, but his father tends to be constructionally challenged. Thanks, guys. (End of press briefing.)

There was no direct or indirect response to the issue raised by Kinsolving addressing either Obama's view or Gibbs' view of the BSA.

New York is not the only city in which the BSA is feeling some backlash. Since 1928, the BSA in Philadelphia has been housed in a government building rent-free. The city of Philadelphia decided to revoke this special privilege because, officials said, BSA's national policy banning gays violates the city's nondiscrimination policies. (Last week, a Philadelphia jury ruled in favor of the Boy Scouts, meaning they will not be evicted from their home or forced to pay rent, at least for now.)

Wouldn't you think that with all of the cultural hot water the BSA is in in our courts and the public square, the honorary president of the organization might defend its First Amendment rights to assemble and believe as it has for 100 years?

On the other hand, it's interesting to note that atheist leaders of the Secular Student Alliance recently were bragging on their website that for the first time, they were invited to the White House to participate in a meeting on interfaith service projects on college campuses. The meeting was sponsored by the Obama administration's Office of Faith-based and Neighborhood Partnerships.

And what about the BSA? Were its leaders invited by their honorary president to participate, as well?

Hasn't America reached a particular low in its history when the White House distances itself from the Boy Scouts of America but invites the Secular Student Alliance to participate in its faith and college missions?

President Obama became the honorary president of the BSA in March 2009, and the White House didn't even mention it. And ever since, any discussions or interactions with the Scouts have been "don't ask, don't tell." And how could they, because the president would then have to acknowledge publicly that as honorary president of BSA, he affirmed the Scouts' oath, beliefs and policies, which prohibit atheists and agnostics from membership and "avowed" homosexuals from leadership roles?

Just as Pontius Pilate washed his hands of any buy-in to Jesus' execution, the White House continually is whitewashing its connection and responsibility to the BSA. And just as Pontius Pilate's actions prompted us to question what good came from his position, President Obama has caused us to wonder what good has come from his role as honorary president of BSA. (I'll answer that specifically in the third and final part of this series, when I will compare Obama's contributions to the BSA with those of previous U.S. presidents.)

But then again, maybe I should just sit back, do nothing and simply drink the White House Kool-Aid and say, "I'm glad Robert Gibbs is spending time with his son. I wonder whether they won the Pinewood Derby?"