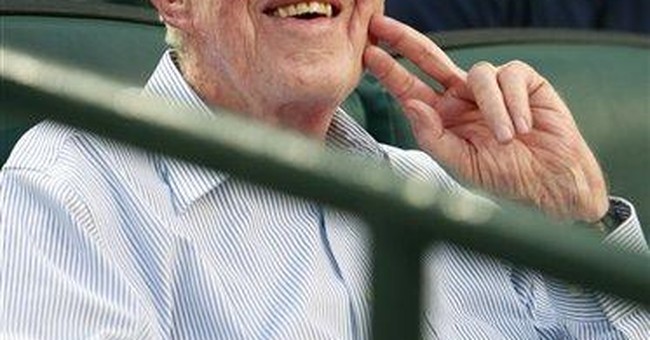 As I gazed onto a parade route sprinkled with red, white and blue everything on July Fourth, I thought about what patriots past and present have sacrificed for our freedom. I also thought about the people in Iran fighting for "azadi," the Persian word for "freedom."

The White House has offered what amounts to diplomatic dribble in response to their plight for liberty. I'm not saying our president should send a militia to muscle the mullahs, but shouldn't he at least show stronger solidarity for the protesters? Isn't it time his actions superseded his rhetoric? Negotiating with extremists has never worked. Trying to reform them only morphs them into different monsters.

Is it just I, or are others experiencing a Carter deja vu?

Former President Jimmy Carter didn't do enough to support an Iranian popular revolt. His foreign policy was ridiculously idealistic. Carter believed that he could negotiate his way out of anything. He tried to pacify every party. Carter believed international thugs and terrorists could be swayed from extremism by our simply presenting them what he thought was a better way.

Carter is a major reason that we are in our Middle Eastern dilemma with Iran today because, while allegedly fighting for human rights, he set the stage for the rise of two of the worst human rights violators in history -- Ayatollah Ruhollah Khomeini and ultimately his modern successor, the current president of Iran, Mahmoud Ahmadinejad.

As many recall, during the early 1970s, democratic-flavored reforms flourished in Iran because of Shah Mohammad Reza Pahlavi, from economic and educational reforms to increased rights for women, religious minorities, etc. And the Nixon and Ford administrations applauded and rewarded these reforms.

With Carter's induction as president and push for human rights in international affairs, the Shah of Iran's popularity declined because of accusations that he tortured thousands of prisoners. Carter demanded the shah release political prisoners, break up military trials, and permit free assemblies, among other requests -- all of which only fostered political and social unrest.

Carter's push for social reform in the name of human rights prompted the further uprising of extremists and anti-government rallies. And by the fall of 1977, anti-shah Shiite clergy and university students were conducting well-organized resistances. Carter's connection to and influence over the shah prompted this pro-Western leader's backlash in Iran and around the world. Even while visiting the White House in November 1977, the shah and his empress were met by thousands of protesters.

Instead of bringing further social reform to Iran, Carter fed the fire for a political revolution and the return of Ayatollah Khomeini, who was then a 78-year-old theological scholar and cleric who provided leadership to Shiites. Having spent more than 14 years in exile in Iraq, in 1978 he was kicked out of the country by none other than Saddam Hussein (a tension that would lead to the eight-year war between the countries, from 1980 to 1988).

Khomeini, however, would not return to Iran until the shah was disposed. And so, on Jan. 16, 1979, the shah left Iran on an "extended holiday," not to return. Two weeks later, Khomeini stepped back onto Iranian soil, with 6 million welcoming him and the full fanfare of even Western media.

In power, Khomeini reversed many of the shah's reforms and ushered in an era of Islamic extremism that would serve as a model and catalyst for future terrorist groups. Nine months after Khomeini came back to Iran, the U.S. Embassy in Tehran was taken over by extremists, and 52 Americans were held hostage for 444 days. (It is reported that among the extremists was none other than 23-year-old Mahmoud Ahmadinejad, though he personally denied it to Time magazine and others. Whatever the exact nature of his involvement, he eventually would become a Khomeini successor and the president of Iran -- he who denies the Holocaust, wants to wipe Israel off the map, and is in the process of building a nuclear arsenal.)

And who's to thank for Ahmadinejad's rise to power? Among the primary contributors is Jimmy Carter's "fight for human rights" with the shah and Iran.

Carter carried on a political policy that ultimately enabled dictatorial rule and disabled democratic resistance, and it appears our current president is, as well. When will we learn that soft talk and small sticks get you beat up on the playground of world affairs? That is why even Secretary of State Hillary Clinton recently advised President Barack Obama to crank up his lukewarm lingo.

The recent civil unrest in Iran is a clear indicator that the people there are not happy with the present regime and their rule and oppression by severe Shariah law. I think what Iranians need is a new government in Tehran -- and not just Mir Hossein Mousavi versus Ahmadinejad. They need a regime change and an overthrow of the 1979 Islamic revolution. They need a truly representative form of government. But that is not what our president is going to fight for.

But then, what is he fighting for? One thing is for sure: We all will reap what he sows.