What We Learned from Operation Warp Speed

Christina Herrin
|
Posted: Jan 29, 2021 2:33 PM
Share   Tweet
The opinions expressed by columnists are their own and do not necessarily represent the views of Townhall.com. 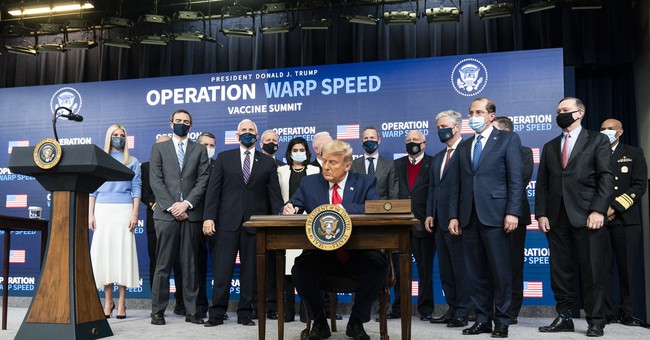 COVID-19 has upended our lives and highlighted government incompetence, but it is also necessary to showcase government’s successes during the pandemic. Perhaps the greatest example of government success concerning the pandemic is the Trump administration’s Operation Warp Speed.

In short, due to the Trump administration’s no-nonsense approach regarding the development of the vaccine, in which the federal government partnered with several private companies and drastically reduced red tape and regulatory hurdles, the United States has three viable vaccines.

Arguably, one of the key reasons the development of these vaccines occurred in such a short period is due to groundbreaking mRNA technology. This new approach to vaccine delivery is revolutionary and could lead to all sorts of other health care breakthroughs. In the future, the use of mRNA technology to cure other life-threatening diseases, like cancer, is what we can and should hope for.

Given the overwhelming success of Operation Warp Speed, one cannot help but wonder if the same approach should be applied across the board in terms of drug development. On average, it takes 12 years and $2.9 billion to bring a drug from lab to market. But like we saw with the successful development of the COVID-19 vaccine, this is not the way it has to be.

Millions of Americans are suffering with chronic diseases other than the coronavirus. The same urgency should be applied to developing drugs and treatments for their ailments.

Supporters of Food and Drug Administration (FDA) reform simply desire to put the best interests of patients first and foremost. There are several ways this can be done. For example, removing regulatory barriers to innovation is a first step. Free to Choose Medicine (FTCM) is a policy proposal that does just that.

Free to Choose Medicine (FTCM) would apply free market principles to the draconian drug approval process by allowing patients to have access to therapies before they have received the gold stamp of approval from the FDA.

In short, FTCM would create a pathway for patients who have exhausted all other treatment possibilities and want access to unapproved, yet potentially life-saving, therapies.

Currently, Right to Try (RTT) legislation contains a similar goal, but RTT is internally flawed because it doesn’t provide a market incentive for a bio-pharmaceutical company to bypass efficacy testing.

FDA has the final say on all drug production in America. Unfortunately, onerous FDA regulations stifle drug development because of the high costs and extended timeline they impose on drug manufacturers. When patients have no good options, it should be up to them to choose whatever medicine they prefer, not the FDA.

FTCM would bring drugs to market sooner and would lower costs by removing the labyrinth of unnecessary efficacy testing.

If a drug has passed initial safety testing, it should be made readily available to patients fighting for their lives. If a drug is being tested on patients via clinical trials, then any patient suffering should have the freedom to choose it as a treatment option as well.

The goal of FDA should be to allow good drugs to succeed sooner, and bad drugs to fail faster. We saw this happen with the COVID-19 vaccine. We know it can be done.

America should be front and center, leading the world in the development of the state-of-the art drugs and treatments. But unfortunately, FDA’s arbitrary regulations blunt the development of timely, affordable drug development. It is time for FDA to act as a bridge to innovation, not a barrier, and build off the success of Operation Warp Speed, which is a testament that drugs can be developed in record time, as long as the FDA gets out of the way.