Christian Josi
|
Posted: May 31, 2018 2:00 PM
Share   Tweet
The opinions expressed by columnists are their own and do not necessarily represent the views of Townhall.com. 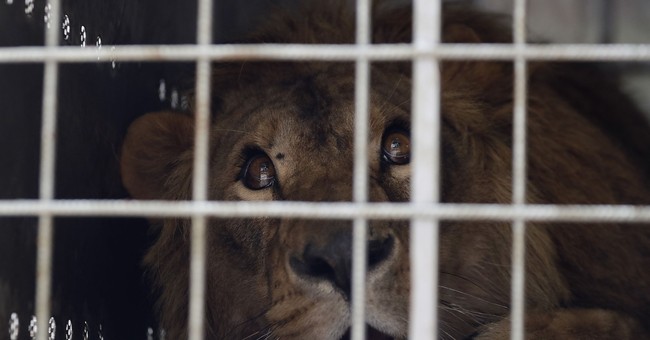 Sometime over the last few decades, “animal protection” became synonymous with, er, let’s say “enthusiastic” people doing things like throwing red paint on fur coats, demanding wholesale ban of meat (and pets!), and of course bashing a sitting president for swatting a fly during a TV interview. While the vast field of animal protection certainly has its oft misguided, dogmatic flank—as does any movement—the truth is that there are just as many animal lovers wearing MAGA hats as there are wearing p***y ones.

Nothing—nothing--rocks the political and media world like a good shot of strange bedfellow political and social activism. And today, on the most worthy animal welfare front, we are seeing the dawn of perhaps one of the most formidable alliances ever.

You probably wouldn’t know it, but for years center-right folks have lead the way on historic efforts to prevent and punish animal cruelty, from storied animal lover Sen. Bob Dole (R-KS) passing and strengthening the federal Animal Welfare Act to Sen. Bob Smith (R-NH) retiring chimpanzees from labs. Even Rick Santorum – whom even most center-right folks can barely stand – was pretty heroic and committed to the cause during his time in the US Senate.

Today is no different. The demand for progress from folks you might otherwise not associate with animal welfare is just broader and the demanders louder. It’s beautiful thing. And it’s having the most welcome added benefit of focusing and trimming fat, so to speak, from what had become for a time a rather ineffective and meandering movement completely owned and dominated by the left.

Indeed it’s not all sweetness and light amongst these strange bedfellows. Not all of the old guard are keen for their relatively newfound determined, feisty and lean company. But they’ll learn. If they would like to survive, they’ll learn. And oh, what change will come. Quickly!

While some bloated and impotent establishment groups fundraise off of their same-old “Republican attack on animals” and blindly fill the coffers of Democratic lawmakers out of nothing more than habit, a pugnacious watchdog group called White Coat Waste Project (WCW) that was founded by a veteran GOP political strategist who once worked in a taxpayer-funded animal testing lab has been making waves and scoring remarkable victories. WCW’s common-sense ‘don’t ban animal testing, defund it’ approach to ending wasteful and cruel government animal tests is helping rack up wins for center-right lawmakers, taxpayers and of course our animal friends. To wit:

In March, our current GOP-led Congress and President Trump cut funding for horrific experiments on puppies at the Department of Veterans Affairs following a WCW exposé and bipartisan campaign led by Reps. Dave Brat (R-VA) and Brian Mast (R-FL). Rep. Brat wrote on his website that, “these unethical painful taxpayer-funded canine research tests have not provided a scientific breakthrough in decades. It is time to defund these wasteful and distressing experiments on man’s best friend.” Brat took the lead on the issue of these tests were taking place in Richmond, VA rightfully attacked this abuse while Senators Kaine and Warner stood on the sidelines.

And now, right wing firebrand Congressman Mike Bishop (R-MI) is taking on government waste and kitten abuse that WCW unearthed at the U.S. Department of Agriculture. After news broke that the USDA has been breeding hundreds of kittens and making them eat rotten meat in deadly experiments, Bishop immediately introduced the Kittens in Traumatic Testing Ends Now (KITTEN) Act to stop the project, remarking, “Any government research program like this one that’s been funded since the Nixon administration needs to be put under the microscope, especially when it involves using kittens as disposable test tubes in harmful tests that most taxpayers oppose.”

One historical center-right pioneer in the cause, Abraham Lincoln, would likely agree. Honest Abe was an animal lover whose wife once said his hobby was “cats” (which is extra funny to me because that’s my hobby tooooo, Honest Abe!).

Polling shows that a majority of voters—and even more Republicans than Democrats—want to cut cruel and outdated government animal testing, and many conservatives are thrilled that there’s finally a segment of the animal protection movement that represents their principles and values. For evidence, look no further than all of the favorable coverage and commentary about WCW’s work with Congress in the Daily Caller, Town Hall, Washington Times, Washington Examiner, PJ Media,Gateway Pundit and even The 700 Club.

The center-right animal protection legacy is older than the labeled center-right movement itself. Kudos is in order for WCW and their other loud and proud fellows’ fresh voices and action in opposing government-sanctioned animal cruelty and giving the needle a much-needed boost on animal welfare in general.

The strange left-right bedfellow coalition is nascent, but if and when it truly congeals, unimaginable change will occur.