Save Sports for the Next Generation of Female Athletes

Christiana Holcomb
|
Posted: Mar 19, 2020 4:00 PM
Share   Tweet
The opinions expressed by columnists are their own and do not necessarily represent the views of Townhall.com. 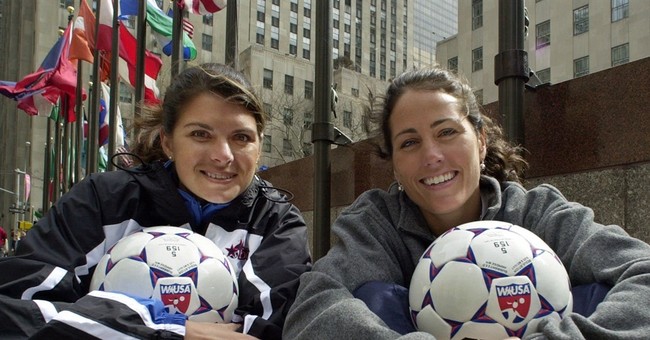 Serena Williams. Florence “Flo Jo” Griffith-Joyner. Mia Hamm. Lisa Leslie. Katie Ledecky. These incredible female athletes are just a few of the many women who have shaped and defined women’s sports. Millions of Americans cheered them on as they rose to the top of their respective sports of tennis, track, soccer, basketball, and swimming. Countless young girls have drawn inspiration from the accomplishments of these women, waiting in line for hours to get a picture and autograph from their personal hero.

These athletes’ successes have inspired other girls to pick up a racquet or start kicking a soccer ball in the backyard. After the U.S. Women’s Soccer Team won the World Cup in 1999, girls’ high school soccer teams saw a 45% increase in participation over the next decade. Greatness inspires greatness.

But what if these women were never given a fair playing field where their talents could shine? What if there were no women-only leagues? What if female athletes were forced to compete against males, whose different physiology gives them an undeniable advantage in sports?

Idaho HB 500 is a bill designed to protect fairness in women’s sports in that state and ensure that there will be another generation of Serenas and Flo-Jos. The bill, which passed through the legislature and now is awaiting Gov. Brad Little’s signature, preserves the hard-fought gains women have made so that their athletic accomplishments receive the same recognition as their male counterparts. It prevents biological males from competing in female sports and provides a legal remedy for girls who are deprived of athletic opportunities as a result of bad policies that permit males to compete on female teams.

This bill is urgently needed as we are seeing more instances in which males are taking spots on female teams and pushing girls off the podium. In Connecticut, two biological males dominated girls track after they began competing as females under a harmful state policy. In just a few seasons, these two males captured dozens of state and regional championships and shattered long-standing female track records with times that no girl could ever hope to touch.

At the collegiate level, CeCe Telfer—a biological male who competes as a female—blew away the competition at the NCAA Division II Women’s 400-meter Hurdles Championship. In a sport where just hundredths of a second can make the difference between first and second place, Telfer posted a time almost two seconds faster than every other female competing.

These stories are only going to become more and more common unless Idaho and other states take immediate action to save women’s sports and preserve a fair playing field for female athletes in their states.

The growth and flourishing of women’s sports over the past 40 years has been one of the great accomplishments of the modern era, a result made possible by enacting Title IX in federal law in the early 1970s. Title IX gave females equal access to athletic opportunities and benefits in schools and colleges throughout the country. Before Title IX, less than 4% of girls participated in sports. Today, more than 40% of girls play sports.

Laws like HB 500 preserve the incredible gains for girls’ sports brought about by Title IX. They ensure that our daughters and granddaughters are not forced to sit on the sidelines, reduced to mere spectators as males take the gold medal in the female division.

Christiana Holcomb is legal counsel for Alliance Defending Freedom (@AllianceDefends) and represents three female athletes and their mothers in a federal lawsuit against the Connecticut Interscholastic Athletic Conference.