Chris Talgo
|
Posted: Aug 07, 2021 12:01 AM
Share   Tweet
The opinions expressed by columnists are their own and do not necessarily represent the views of Townhall.com. 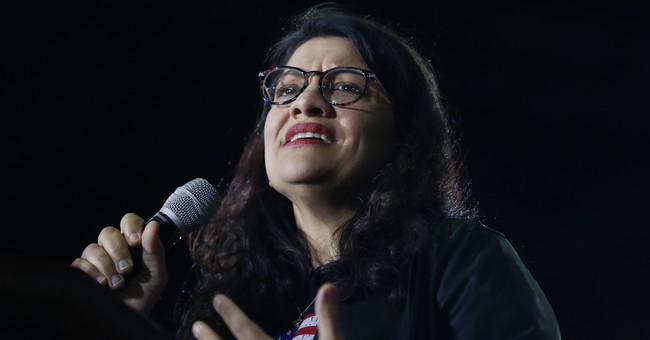 Just when you thought she couldn’t possibly do anything dumber, Rep. Rashida Tlaib (D-MI) wants to cancel Americans’ utility debt, and she totally redeemed herself.

Tlaib, a founding member of the so-called Squad, has introduced a bill that would literally eliminate Americans’ outstanding debt on water, electricity, internet, etc.

According to Tlaib, “Utility shutoffs—from water to electricity to broadband internet—leave our most vulnerable communities without essential life-sustaining services and are especially unacceptable during a deadly pandemic.”

She added, “Low-income Michigan families pay more than 30 percent of their household income on utility bills alone, creating a direct path to debt and eviction, [which] makes the issue that much more pertinent. We have to break the cycle and ensure folks can keep their lights on, their water running, and the roofs over their head.”

So, landlords cannot evict people who do not pay their rent, thanks to the Centers for Disease Control’s unconstitutional proclamation of an eviction moratorium.

And, utility companies cannot shut off service to people who do not pay their bills.

Is it just me, or is American society upside-down?

Of course, Tlaib makes no rational or logical argument to support her utility debt cancelation policy.

Instead, like most on the left nowadays, she uses emotions and feelings to guide her public policy positions. That is no way to govern a country.

If we learned anything over the past few hundred years, it is that public policy is best made when it is fair and logical. After all, wasn’t that the entire point of the Enlightenment? And the American Founding?

However, this does not resonate with Tlaib. In her worldview, Marxism is the name of the game.

Tlaib, like her colleagues in the Squad, is a socialist. She buys into the oppressor v. oppressed narrative, hook, line, and sinker.

In her misguided mind, people at the bottom rungs of the economic ladder are in an eternal state of oppression. Such is why they need her to save them from the oppressors, or so she believes.

But, in reality, her foolish policies have the opposite effect. By constantly decrying the position of the downtrodden, she makes these people into eternal victims.

Her bigotry of low expectations, which is part and parcel for the left these days, does not uplift these people. Instead, it keeps them in a perpetual state of government dependence.

Yes, leftists like Rashida Tlaib, whether wittingly or unwittingly, are at least partially responsible for the cycle of poverty that has manifested throughout the nation since the colossal failure of the so-called War on Poverty.

One would assume that after more than six decades of government transfers and expanded welfare programs, with little effect on the poverty rate, that this would be apparent. Alas, it is not.

The answer from leftists is always more wealth redistribution. From a universal basic income (which Tlaib ardently supports) to “free” college, the left’s calls for more government hand-outs is insatiable.

However, these gimmicks will not solve the root causes that have led so many Americans into this perilous situation.

If Tlaib, and those in the Squad, actually want to address generational poverty, canceling utility debt is not the solution. Neither is a universal basic income.

On the other hand, education choice would make a world of a difference in stopping the cycle of poverty. As would economic policies that incentivize job creation in demoralized areas of America’s inner cities.

Perhaps Tlaib and her comrades should push for lower taxes, reduced regulations, professional licensure reform, and a host of other policies that have been proven to help pull Americans from poverty.

Unfortunately, the odds of that happening are about one in a million. On the bright side, at least there is a chance.

Chris Talgo (ctalgo@heartland.org )is senior editor at The Heartland Institute.