SNL Punts on Trump, Attacks His Voters Instead

Chris Stigall
|
Posted: Oct 31, 2019 12:01 AM
Share   Tweet
The opinions expressed by columnists are their own and do not necessarily represent the views of Townhall.com. 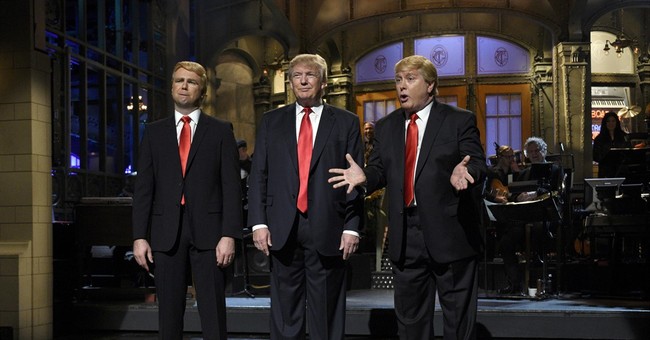 It was the evening of September 9th, 2016. I was booked as a guest on CNN Tonight with Don Lemon.  Mr. Lemon was particularly wound up about Donald Trump not releasing his tax returns and extremely frustrated with me for not sharing his outrage.  He pressed and pressed as to how I could defend the Republican nominee over his tax secrecy.  I continued to press Mr. Lemon as to how he could ignore the biggest development of the news cycle to instead relitigate tax returns.

It was the last time I was ever asked to be on the show.

I remember that evening so well not because I locked horns with Don Lemon or that I was never invited back. That was the night Mrs. Clinton formally declared war on half the electorate and destroyed any hope for her 2016 campaign. I knew it was a huge news story, but Mr. Lemon refused to hear my declaration of its significance.

“You know, to just be grossly generalistic, you could put half of Trump’s supporters into what I call the basket of deplorables.  Right?  The racist, sexist, homophobic, xenophobic, Islamaphobic – you name it.  And unfortunately there are people like that.  And he has lifted them up.”

It was a far more brutal version of her old boss’ fundraiser comments eight years earlier.  Illinois’ junior Senator Barack Obama, holding court with a similar group of rich, coastal elites in 2008 attempted to explain small town America’s economic collapse and how it impacted voter attitudes in those communities.

"And, it's not surprising then that they get bitter, they cling to guns or religion or antipathy toward people who aren't like them or anti-immigrant sentiment or anti-trade sentiment as a way to explain their frustrations."

Hilariously, ironically, pathetically – whatever you choose to call it in the rearview mirror of today – the 2008 version of Mrs. Clinton admonished her primary opponent for the insult. "I was taken aback by the demeaning remarks Senator Obama made about people in small-town America," she said. "His remarks are elitist and out of touch."

Eight years later and it was clear her admonishment of Obama was not only phony but she secretly agreed.  In fact, her disdain for huge swaths of the country was probably twice as great as her predecessor.

Donald Trump’s presidency, his very existence has done something vitally important for the country.  It has brought into full focus the utter contempt those in the ruling class have for those they’re supposed to represent.  My friend Kurt Schlichter often says, “they hate you.”  I didn’t want to believe that.  But it’s undeniable.

Conservatives have always suspected politicians don’t listen or care.  But never in history have we heard such blatant confirmation.  Of course it’s no longer just in politics.  Sports stars and entertainers are now ripping their masks off alongside their favorite Democrats.

It’s a given where shows like SNL stand.  You’re well aware and I’ve written plenty about that.  What might surprise you is the new level of loathing the classic comedy show stooped in not only hating on Trump, but also hating on you for supporting him.

Last week, in a typical, boring and unfunny cold open in which Alec Baldwin plays President Trump, the sketch stunningly veered away from their typical target and went directly at those in his rally audience.

The show brought in extras to stand behind Baldwin’s Trump to dutifully nod in the background and chant like zombies on cue no matter what inanity came out of the character’s mouth.  SNL cast member Cecily Strong played a Trump supporter called up on stage to stand with Baldwin’s Trump to address the mock rally.

Strong’s shirt read “KEEM AMARICA GREAB AGRAIN.”  When Baldwin’s Trump points out her shirt is misspelled, Strong says “Nope.  This was taken verbatim from one of your tweets therefore it’s correct.  The words needed changed because you said so, sir!”  Strong’s characterization of a Trump supporter is breathless, angry, and passionately dumb.

She goes on to protest the “deep state lizard conspiracy” and claims “the FBI, the CIA, the MIC-KEY and the M-O-U-S-E are all in on it” as the cast of extras behind her nod in approval. The live studio audience of SNL chuckled at the characterization. I say chuckled because this isn’t comedy. It’s mean spirited and completely misdirected.

It was striking. Everyone understands the forces behind SNL hate President Trump.  We understand the writers and cast not only vote for Democrats, but range from confused, to amused, to downright contemptuous of much of the country who don’t see things their way politically.  They certainly can’t abide millions of Americans – potential viewers of their show – vote for someone they hate so much.

So they finally snapped.  They ripped off their masks and showed themselves. Just as Mr. Obama and Mrs. Clinton did before them.  SNL could no longer publicly ignore what they really can’t stand.  They can’t stand you.

A show historically credited for skewering the political and speaking truth to power has now dropped all pretence and turned its “creative” fire against average Americans who don’t support their politics.

They really do hate you. They’re not joking.