Don’t Make Me Choose Between You and Trump, Mr. Letterman

Chris Stigall
|
Posted: May 23, 2019 12:01 AM
Share   Tweet
The opinions expressed by columnists are their own and do not necessarily represent the views of Townhall.com. 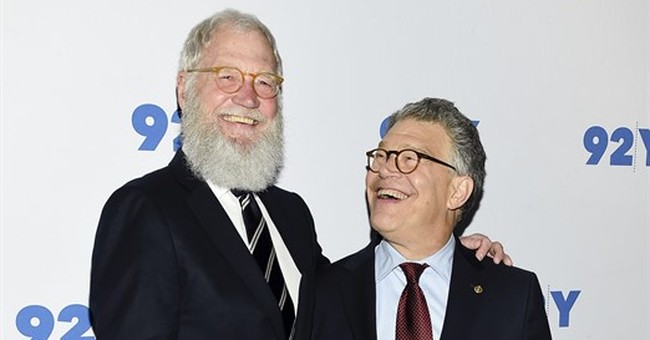 The last few days have seen a spike in celebrities who just can’t hold their tongues or mask their hatred for President Trump.  The tendency for those of us who voted for Trump is to eye-roll, shrug, dismiss, or insult the partisan stars in question.  But every-so-often, I feel compelled to explore their behavior and express my disappointment in them anyway.

There’s only one reason I’d read Newsweek, and it’s to read the work of a contributing writer who’s also a broadcasting colleague I admire greatly.  His name is Lee Habeeb, host of Salem Media Group’s “Our American Stories.”  He wrote eloquently something that had been nagging at me about many celebrities in the Trump era.

Specifically, it was an open letter to Robert De Niro.  The actor is a virulent, anti-Trumper who loves to take microphone time during interviews and ceremonies to offer profane tirades directed at the President.   Habeeb’s column didn’t offer his counter-point on Trump to De Niro.  Instead, he offered his profound disappointment with the Oscar-winning movie star as one of his biggest fans.

“Watching you turn into a caricature of yourself is tragic,” wrote Habeeb.  “Because if there’s one thing your acting life embodied, it was your uncanny ability to avoid caricature.  You brought characters to the screen in their most complex and complete form.  Without judgment.  It was, in the end, your humanity that so impressed me.”

I know exactly what Lee is saying here.  I feel the very same way about television icon and host David Letterman.  Just last weekend, Letterman appeared on the ‘Today Show’ to promote the second season of his new Netflix series.  It’s largely a vanity project in which Dave interviews some genuine celebrities.  However, mixed within are genuinely boring, lecturing, leftists and activists Letterman seems to want to sell to his audience.  As if watching means one must internalize something more important than just enjoying a show.

But I miss the guy who used to seem not to care about the rules of television or the importance of politics. Serious things were left to others.  He was serious about being unserious.  His guests were either there to share a laugh, or they were the targets of the laugh.

That’s gouache in late-night now.  Every night has turned into partisan applause lines, not laughs.  Every host has turned into an anti-Trump jester.  Many guests on the couch are policy makers from D.C. and beltway journalists.

Sadly, Letterman not only approves of the new late-night approach, he confessed were he still on the air his hatred for Donald Trump would be too much to overcome.  In other words, an icon of comedy has devolved into an angrily serious caricature.  A square, old crank he would have once targeted with a “Top Ten Things That Make Dave Angry” list.

As Habeeb wrote well of De Niro, something that could just as easily apply to my hero Letterman, “It seems to have become a part of your routine, your anti-Trump tirades.  Sadly, routine is a word I never thought I’d come to use to describe you.”

Household names who’ve made millions entertaining American viewers and fans on the front-end of their careers now flagrantly attack and insult Donald Trump.  In doing so, they also attack and insult the sixty-plus million of us who voted for him, too.

If I had Letterman in front of me today, I’d ask a simple question.  “Dave, are you able to allow yourself the possibility I can be a fan of yours and support Donald Trump’s presidency at the same time?” I honestly don’t know what he’d say.

Could Letterman and I agree on some things Trump says or does we wish he wouldn’t?  Sure.  Could we, at the same time agree Trump has implemented policies that have lifted up, protected, and helped men and women from the middle of the country Dave and I share as a birthplace? Highly doubtful.

This really gets to the fundamental difference between Mr. Habeeb and me versus our celebrity heroes.  They cannot allow themselves the possibility a man they dislike could still be an effective leader. When you’ve become as rich and famous as they have, you can afford to think that small.

For many of the rest of us, Donald Trump provided a voice for those who felt voiceless or concerned or worried or downright mad about the direction of the country.  We don’t have the luxury of worrying about his personality because we have livings to earn and children and families to raise and protect.

When your world is nothing but counting the millions in your bank account and vanity appearances in front of liberal audiences who applaud your open disdain for Donald Trump, it’s impossible to understand or connect to what daily life in the trenches is like.

Ours is a country in which a once-struggling actor and comic rose to fame.  They portrayed average folks in their roles.  They entertained average folks with their jokes.  They grew rich from us all.  Now, they don’t need us anymore.

But we’re still here.  And we still need a voice.  And we still want great actors and comedians to enjoy and admire.  But most have blown us off.   Donald Trump has not.

So, if I have to pick between guys who’ll fight for the policies I believe will better the country or cranky, partisan guys who used to entertain me but now attack my beliefs?

Sorry, Dave.  I’d rather watch a Trump rally.  And for what it’s worth, he’s a hell of a lot more entertaining, too.