Mud in the Defense of Liberty!

Charlotte Hays
|
Posted: Mar 04, 2016 12:01 AM
Share   Tweet
The opinions expressed by columnists are their own and do not necessarily represent the views of Townhall.com. 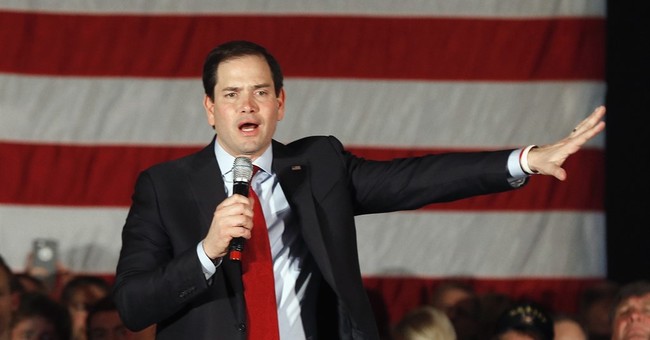 Unlike the stuffier elements of the conservative movement, I fell in love with Senator Marco Rubio all over again when the suddenly battling and definitely embattled GOP hopeful went after Donald Trump's illiterate spelling on Twitter, his orange skin, and the short fingers about which Mr. Trump has harbored insecurities ever since Spy magazine gleefully dubbed him the "short-fingered vulgarian."

Displaying an unsuspected gift for getting under that orange-hued outer covering, Rubio said on the stump, "I don't understand why his hands are the size of someone who is 5-foot-2. And you know what they say about men with small hands? …You can't trust them." As my old boss in the gossip business, Richard Johnson, formerly of Page Six, might have said of Rubio's timing--bada-bing.

Predictably Sen. John McCain, the 2008 GOP candidate against then-Senator Barack Obama, stepped forward to compare the boyish Florida senator to nasty comedian Don Rickles and proclaim himself "saddened and upset by this level of discourse."

McCain said that he wouldn't want to win that way. Well, if you remember your history, McCain didn't win, and perhaps he would have with a better campaign. The loss has ushered in seven (and counting) years of an Obama economy that provides only part time jobs to people who desperately need full-time work and a world adrift in danger without American leadership. Yes, McCain lost like a gent and the results have been horrific.

Ignoble souls such as myself, who would have preferred victory, even at the cost of a dollop of Sen. McCain's vanity, find the Arizona senator's disdain for Rubio's roughhouse campaigning utterly unpalatable. McCain implies that he has too much honor to fight like Rubio. But it wasn't honor that made him a weak campaigner against Barack Obama. It was vanity and fear. McCain didn't want to be called a racist, even if he knew the charge to be untrue. McCain often seemed hesitant to wage the kind of campaign required to defeat Obama—one that actually pointed out his opponent’s many shortcomings, his lack of experience and judgment, and his radical positions on many policy issue that put him out of the mainstream. But he didn’t and the rest is history.

Who bears the burden of this defeat?

McCain, even with his self-image intact, certainly suffered greatly from his defeat at the hands of a freshman senator. But the country arguably suffered more. The esteemed senator holds onto his seat in the Senate. Would that the same could be said for those who have lost or failed to find good jobs over the last seven years.

Why is it unseemly to fight like hell to save your beloved country from what you believe will be a disastrous presidency? Don't we deserve candidates who place the need to defeat a man (or woman) they feel will lead the country down the wrong path above their private vanity?

Just to be clear, I draw the line against truly ignoble taunts. I would not want Rubio mimicking a handicapped reporter or saying that former president George W. Bush, whose dignity in the face of harsh criticism is the eighth wonder of the world, had lied about weapons of mass destruction in Iraq, as Donald Trump has done. But there is a line between the funny and effective and the truly despicable. Rubio's mockery was cutting but grounded in truth, and laced in important points about a man whom many people are supporting for president even though they know little about his actual record, let alone his plans if elected to office. It was also pretty funny.

We may wish that the mudslinging could be delegated to surrogates, as it was in the early days of the republic. But those days are gone. Also perhaps gone is our notion of what really amounts to a smear. When Sen. Bernie Sanders issues a blanket smear of the millions of people who work on Wall Street and associated financial services, most of whom Mr. Sanders has not met and certainly the majority of whom toil with honesty, as corrupt to a man or woman, it is hailed as idealism. Why is this not seen as a smear?

One important thing that should be added: Rubio's attacks on Trump seem to have worked. Late deciders went for Rubio. Also important, Trump could not answer many of Rubio's attacks, unless you consider face contortions as answers. Rubio helped to unmask an opponent. Even if you are a Trump supporter, you might have noticed that Rubio was effective. Rubio seems to be backing down as of this writing. If he intends to remain in the race, that is a mistake.

Mud in the defense of liberty! Keep slinging, Sen. Rubio, because in the scheme of things, the fate of the country matters more than any single politician's pose as being oh-so-above the fray.