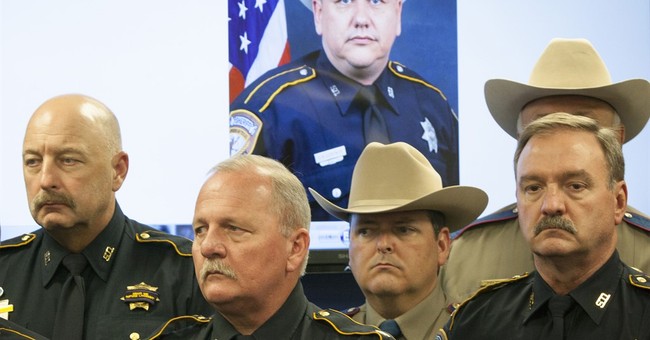 According to an item in New York Magazine's "Intelligencer" column, Monica Foy, a twenty-six year old junior at Sam Houston State University in Texas, is the "victim of a terrifying, right-wing internet-shaming."

What had Ms. Foy done to provoke the wrath of right-wingers, who filled her Facebook and twitter feeds with angry comments? Well, just this tweet about the murder of Officer Darren Goforth, the Harris County, Texas Sheriff's deputy who on August 28 was shot in the back as he was filling his gas tank:

I can't believe so many people care about a dead cop and NO ONE has thought to ask what he did to deserve it. He had creepy perv eyes . . .

What indeed had Darren Goforth had done to deserve being gunned down as he was filling his gas tank? His crime was none other than that he wore the uniform of law enforcement, making him easily identifiable to cop haters, of whom there are many right now. A ten-year veteran of the Harris County Sheriff's Office, Darren Goforth, 47, left behind a wife and two children, aged twelve and five.

But in the eyes of Jesse Singal, the New York Magazine writer, the twitter campaign that greeted Ms. Foy's tweet was unjustified right-wing cruelty.

"A fundamental principle of online-shaming is that the process robs people of the context that makes them human beings," Singal writes. Give me a break.

What kind of human being is Monica Foy? The kind who tweets that a slain police officer and father has "creepy perv eyes."

Almost as shocking as Ms. Foy's repulsive tweet is New York Magazine's rallying to her defense, but rally it did, saying something not at all good about the state of the New York media culture. Or maybe one of the editors is Ms. Foy's cousin?

As recounted in the magazine, Ms. Foy's ordeal at the hands of right-wingers began after Brandon Darby, managing director at Breitbart Texas, noticed her original tweet. He then tweeted:

You have no idea how much you will regret having been this cold. Enjoy the coming fame!

While Darby's tweet certainly wasn't as creepy as Foy's, it was admittedly somewhat menacing. And as New York Magazine notes, Darby "followed through on his threat" against Ms. Foy. No, Darby wasn’t out to inflict bodily harm, publish her address, or encourage others to physically attack her. But he did take real action by . . . by publishing a brief article on Foy's original tweet. As Mistah Kurtz observed in a different context: The Horror! The Horror!

Because of Darby's prominence, people who'd missed Foy's original tweet picked it up. "Disastrously for Foy," New York Magazine empathized, "the tweet quickly got screen-grabbed and began spreading among right-wing Twitter users, who immediately sought to amplify it." It needed amplifying to express excessive cruelty?

The magazine added that "the first round of Twitter harassment started in earnest during her drive to school with her husband as various right-wing users caught wind of her tweet and came after her for it."

Foy has said that she received death threats, which is unconscionable. It goes without saying that nobody, even one who has done something as repugnant as what Foy did, should receive a death threat. But it is possible to condemn the death threats without putting forward a full-throated defense of Ms. Foy's vicious tweet.

The author of New York's article, Jesse Singal, who "studied inequality in America and how to fix it" at Princeton University's Woodrow Wilson School, admits that maybe Foy made her point in a "clearly an inopportune context," but he clearly believes she has a worthy point that justified her vicious tweet.

"Foy felt terrible about the shooting, she explained to Daily Intelligencer in the first full interview she has granted after a terrifying few days, but as a politically active person who had been watching with interest and sympathy as the Black Lives Matter movement has grown, she was also bothered by what she saw as a double standard on display in the aftermath of Goforth's death," Singal wrote.

"When an unarmed person of color is killed by police, she said, there’s often an immediate effort to prove that they were 'no angel,' that in some way or another they had it coming (though George Zimmerman was a neighborhood watch volunteer rather than a police officer, this general tendency toward victim-blaming tendency was pretty clearly on display in the case of Trayvon Martin). When a white person — especially a police officer — is killed, people seem much more able to accept the fact that some killings are simply unjustified, full-stop."

Foy is missing some important “context” to these incidents. Rather than trying to prove that Michael Brown or Trayvon Martin "had it coming," the legal process in both these shootings involved determining what happened. In both instances, these young men died in circumstances that left questions about who was at fault. The motives and behaviors of those shooting and those shot had to be examined and were.

Darren Goforth was engaged in the routine action of filling his gas tank, with his back turned to his killer. Barring some kind of new information, it is clear that Goforth had done nothing to trigger his shooting.

New York Magazine wants readers to see Foy as a victim. And perhaps she is a cautionary tale: If you make cruel, vicious comments on public social media vehicles be prepared for your own Twitter feed to fill with unpleasant comments. Fortunately, you see, most Americans still don’t like cop killers. They know that such attacks hurt everyone, and particularly those in low-income neighborhoods, where police presence is most needed. Unlike Ms. Foy, most of us are still grateful that there are brave police officers like Darren Goforth who are willing to put on the uniform and protect us from true violence.