The Sting, in Four Parts 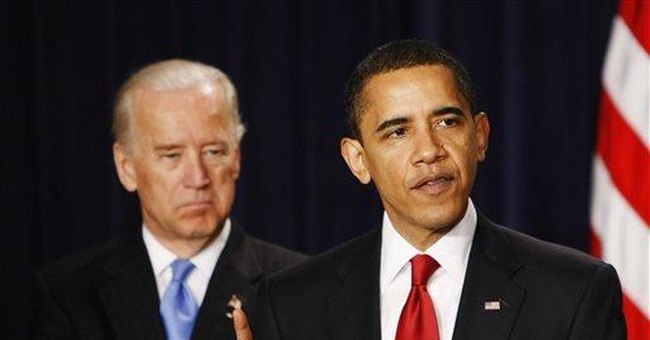 WASHINGTON -- Franklin Roosevelt gave us the New Deal. John Kennedy gave us the New Frontier. In a major domestic policy address at Georgetown University this week, Barack Obama promised -- eight times -- a "New Foundation." For those too thick to have noticed this proclamation of a new era in American history, the White House Web site helpfully titled its speech excerpts "A New Foundation."

As it happens, Obama is not the first to try this slogan. President Carter peppered his 1979 State of the Union address with five "New Foundations" (and eight more just naked "foundations"). Like most of Carter's endeavors, this one failed, perhaps because (as I recall it being said at the time) it sounded like the introduction of a new kind of undergarment.

Undaunted, Obama offered his New Foundation speech as the complete, contextual, canonical text for the domestic revolution he aims to enact. It had everything we have come to expect from Obama:

The Whopper: The boast that he had "identified $2 trillion in deficit reductions over the next decade." It takes audacity to repeat this after it had been so widely exposed as transparently phony. Most of this $2 trillion is conjured up by refraining from spending $180 billion a year for 10 more years of surges in Iraq. Hell, why not make the "deficit reductions" $10 trillion -- the extra $8 trillion coming from refraining from repeating the $787 billion stimulus package annually through 2019.

The Puzzler: He further boasted of his frugality by saying that his budget would reduce domestic discretionary spending as share of GDP to the lowest level ever recorded. Amazing. Squeezing discretionary domestic spending at a time of hugely expanding budgets is merely the baleful residue of out-of-control entitlements and debt service, which will increase astronomically under Obama. To claim these as achievements in fiscal responsibility is testament not to Obama's frugality but to his brazenness.

The Non Sequitur: "To make sure such a crisis (as we have today) never happens again," Obama proposes his radical health care, energy and education reforms, the central pillars of his social democratic agenda. But Obama's own words contradict this assertion. Notes The Washington Post: "But as his admirable summation of recent history made clear, these pursuits have little to do with the economic crisis, and they are not the key to economic recovery." Obama rarely fails to repeat this false connection. A crisis -- and the public's resulting pliability to liberal social engineering -- is a terrible thing to waste.

The Swindle: The Obama administration is spending money like none other in peacetime history. Obama is smart. He knows this is fiscally unsustainable. He has let it be known privately and publicly that he intends to cure the imbalance with entitlement reform.

An excellent strategy. If it takes throwing nearly $1 trillion of "porky" (to quote Sen. Charles Schumer) stimulus spending to soften up a Democratic Congress and make it amenable to real entitlement reform, then fine. Reforming Social Security, Medicare and Medicaid would save tens of trillions of dollars, and make the current money-from-helicopters spending almost trivial by comparison.

In the New Foundation speech, Obama correctly (again) identifies the skyrocketing cost of Medicare and Medicaid as the key fiscal problem. But then he claims that Medicaid and Medicare reform is the same as his health care reform, fatuously citing as his authority a one-day meeting of hand-picked interested parties at his "Fiscal Responsibility Summit."

Here's the problem. The heart of Obama's health care reform is universality. Covering more people costs more money. That is why Obama's budget sets aside an extra $634 billion in health care spending, a down payment on an estimated additional spending of $1 trillion. How does the administration curtail the Medicare and Medicaid entitlement by adding yet another (now universal) health care entitlement that its own estimate acknowledges increases costs by about $1 trillion?

Which is why in his March 24 news conference, Obama could not explain how -- when the near-term stimulative spending is over and his ambitious domestic priorities kick in, promising sustained prosperity and deficit reduction -- the deficits at the end of the coming decade are rising, not falling. The Congressional Budget Office has deficits increasing in the last seven years of the decade from an already unsustainable $672 billion annually to $1.2 trillion by 2019.

This is the sand on which the new foundation is constructed. Obama has the magic to make words mean almost anything. Numbers are more resistant to his charms.