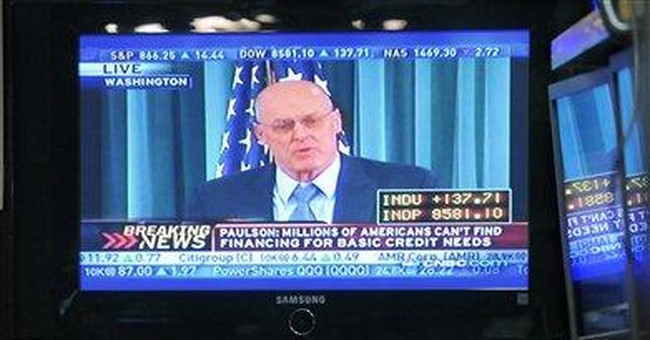 WASHINGTON -- In the old days -- from the Venetian Republic to, oh, the Bear Stearns rescue -- if you wanted to get rich, you did it the Warren Buffett way: You learned to read balance sheets. Today you learn to read political tea leaves. You don't anticipate Intel's third-quarter earnings; instead, you guess what side of the bed Henry Paulson will wake up on tomorrow.

Today's extreme stock market volatility is not just a symptom of fear -- fear cannot account for days of wild market swings upward -- but a reaction to meta-economic events: political decisions that have vast economic effects.

As economist Irwin Stelzer argues, we have gone from a market economy to a political economy. Consider seven days in November. On Tuesday, Nov. 18, Paulson broadly implies he's only using half the $700 billion bailout money. Having already spent most of his $350 billion, he's going to leave the rest to his successor. The message received on Wall Street -- I'm done, I'm gone.

Facing the prospect of two months of political limbo, the market craters. Led by the banks (whose balance sheets did not change between Tuesday and Wednesday), the market sees the largest two-day drop in the S&P since 1933, not a very good year.

The next day (Friday) at 3 p.m., word leaks of Timothy Geithner's impending nomination as Treasury secretary. The mere suggestion of continuity -- and continued authoritative intervention during the interregnum by the guy who'd been working hand in glove with Paulson all along -- sends the Dow up 500 points in one hour.

Monday sees another 400-point increase, the biggest two-day (percentage) rise since 1987. Why? Three political events: Paulson's weekend Citigroup bailout; the official rollout of Obama's economic team, Geithner and Larry Summers; and Paulson quietly walking back from his earlier de facto resignation by indicating he would be ready to use the remaining $350 billion (with Team Obama input) over the next two months.

That undid the market swoon -- and dramatically demonstrated how politically driven the economy has become.

We may one day go back to a market economy. Meanwhile, we need to face the two most important implications of our newly politicized economy: the vastly increased importance of lobbying and the massive market inefficiencies that political directives will introduce.

Lobbying used to be about advantages at the margin -- a regulatory break here, a subsidy there. Now lobbying is about life and death. Your lending institution or industry gets a bailout -- or it dies.

You used to go to New York for capital. Now Wall Street, broke, is coming to Washington. With unimaginably large sums of money being given out by Washington, the Obama administration, through no fault of its own, will be subject to the most intense, most frenzied lobbying in American history.

That will introduce one kind of economic distortion. The other kind will come from the political directives issued by newly empowered politicians.

First, bank presidents are gravely warned by one senator after another about "hoarding" their bailout money. But hoarding is another word for recapitalizing to shore up your balance sheet to ensure solvency. Is that not the fiduciary responsibility of bank directors? And isn't pushing money out the window with too little capital precisely the lending laxity that produced this crisis in the first place? Never mind. The banks will knuckle under to the commissars of Capitol Hill. They control the purse. Prudence will yield to politics.

The Chevy Volt, for example? It has huge remaining technological hurdles, gets 40 miles on a charge and will sell for about $40,000, necessitating a $7,500 outright government subsidy. Who but the rich and politically correct will choose that over a $12,000 gas-powered Hyundai? The new Detroit churning out Schumer-mobiles will make the steel mills of the Soviet Union look the model of efficiency.

The ruling Democrats have a choice: Rescue this economy to return it to market control. Or use this crisis to seize the commanding heights of the economy for the greater social good. Note: The latter has already been tried. The results are filed under "History, ash heap of."