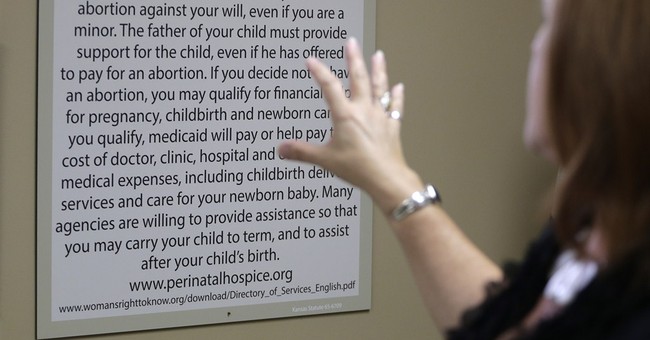 At the Supreme Court oral arguments in the Hobby Lobby and Conestoga Wood Specialties cases in March, Justice Anthony Kennedy tested the limits of the government’s argument by asking if, under the government’s theory, people could be forced to pay for others’ elective surgical abortions through their insurance plan. The solicitor general dodged, responding (somewhat inaccurately) that there was no law like that at present, and did so in a tone that indicated he was happy not to have to defend such an illiberal and unwise law. Cue California.

On Aug. 22, prompted by two Catholic universities’ refusal to provide abortion coverage, the California Department of Managed Health Care announced that all insurance plans must immediately begin covering elective abortions. Citing a 1975 state law, the department concluded that, although it had previously approved health plans that did not include elective abortion coverage, it had belatedly decided that the exclusion of elective abortion “discriminat[es] against women who choose to terminate a pregnancy” in violation of the 40-year-old law.

It should come as no surprise that the ACLU of Northern California applauded the use of state power to force Catholic institutions to pay for abortions. While the nation long had consensus that no one should be forced to participate in abortion in violation of their faith, the ACLU has never joined that truce. Even when Democratic politicians routinely joined their Republican colleagues in overwhelmingly supporting religious liberty and opposing abortion mandates against religious institutions, the ACLU demanded that government bend the Church’s knee.

In the early 1970s, even as the ACLU challenged state abortion laws in the cases leading to Roe v. Wade and Doe v. Bolton, it was also working to force Catholic hospitals to perform abortions – focusing these anti-conscience efforts in the U.S. Court of Appeals for the 9th Circuit. The ACLU tried to have it both ways, citing conscience protections to defuse concerns about a constitutional abortion right leading to compelled participation in abortions even as it fought to force Catholic institutions to perform them.

Thus, in Roe, the Supreme Court could dismiss worries that creating a constitutional abortion right would result in violations of medical professionals’ conscience because the American Medical Association’s House of Delegates had resolved the following:

And in Doe, the ACLU could likewise cite Georgia law confirming that “a physician or any other employee has the right to refrain, for moral or religious reasons, from participating in the abortion procedure” in order to quell concerns that a constitutional abortion right would infringe on conscience. Because “[t]hese provisions are obviously in the statute in order to afford appropriate protection to the individual and to the denominational hospital,” the Supreme Court explained, there was no need for broader restrictions on abortion to protect individual and institutional conscience.

Yet even as the Supreme Court was preparing these opinions, the ACLU was suing Catholic hospitals in Montana and Oregon (in the 9th Circuit), demanding they perform abortions and sterilizations because they received some Medicaid and Medicare funds. The ACLU’s efforts were ultimately rebuffed as the 9th Circuit held in Chrisman v. Sisters of St. Joseph of Peacein 1974, the year after Roe, “If the … refusal to perform [an abortion or sterilization] infringes upon any constitutionally cognizable right to privacy, such infringement is outweighed by the need to protect the freedom of religion.”

If the 9th Circuit’s decision did not let the ACLU know that it had overreached, a near unanimous Congress should have. It overwhelmingly passed the Church Amendment, rejecting the ACLU’s attempt to compel Catholic medical professionals and institutions to provide abortions or other procedures in violation of their conscience. Just two months after the Roe decision, the Church Amendment passed by a vote of 372-1 in the House and 92-1 in the Senate. Among its supporters was Ted Kennedy, who spoke against the ACLU’s efforts and in favor of conscience on the Senate floor:

Subsequent additions to the Church Amendment and similar conscience protections in the Public Health Services Act found broad bipartisan support over the intervening decades. But even as its natural political allies rejected its extreme abortion views, the ACLU did not give up its goal of eliminating government restrictions on abortion nor of employing government to force private parties to facilitate abortions themselves.

Over the past several years, this near universal support for freedom of conscience in the abortion debates has broken down. The congressional voting margins for the Weldon Amendment – prohibiting recipients of federal funds (including California) from discriminating against any entity that does not provide insurance coverage of abortion – were narrower than its predecessors. The Obama administration made one of its first acts the repeal of Bush administration healthcare conscience regulations. And, adopting a posture that even the most staunchly pro-choice Democrats of prior decades would have rejected, Democratic politicians have now famously attacked any defense of conscience protections for religious employers who object to paying for abortifacients as a “war on women.”

The California decision to compel Catholic institutions to facilitate abortions in violation of their conscience would have been unthinkable in 1975 when the state law now cited as the basis for this new mandate was enacted. After four decades of relentless effort by the ACLU, it has now found government support for its illiberal agenda to not just secure an unenumerated abortion right but to also subjugate any individual religious liberty objections to this abortion right.

It is time for the Healthcare Conscience Rights Act. Introduced by Rep. Diane Black and Sen. Tom Coburn, this bill would provide a permanent home in the U.S. Code for the Weldon Amendment, ensuring that critical protections for conscience rights are not subject to the political winds in any given budget cycle. It would also provide a clear right for anyone whose conscience protections are violated to seek to stop the violation in court.

After four decades of consensus on conscience, it is clear that this moment has sadly passed. California, and perhaps other states at the urging of groups like the ACLU, will seek to compel citizens to facilitate abortions against their conscience. Depending upon the Obama administration alone to enforce these federal laws and demanding that governments receiving federal taxpayer dollars respect conscience are unlikely to be sufficient efforts.

Whatever one’s abortion views, Americans should be able to agree – as even the most ardent abortion supporters in Congress historically have – that the “choice” should not involve government compulsion. California’s radical decision might provide the moment for a return to this commonsense common ground.