Carl Horowitz
|
Posted: Aug 17, 2019 12:01 AM
Share   Tweet
The opinions expressed by columnists are their own and do not necessarily represent the views of Townhall.com. 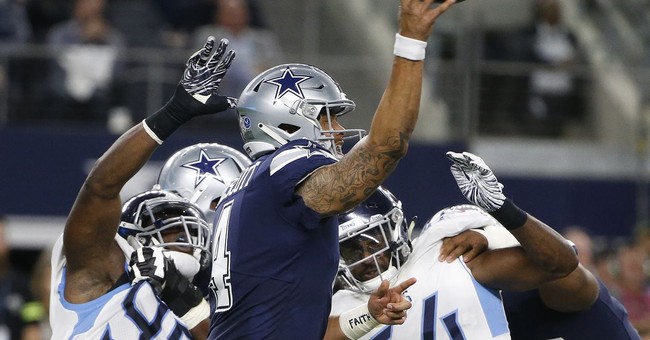 When it comes to racial shakedowns, few organizations succumb on a grander scale than the National Football League. This tendency was on full display on Tuesday when NFL Commissioner Roger Goodell and black rapper/business mogul Jay-Z announced a multiyear partnership “to enhance the NFL’s live game experiences and to amplify the league’s social justice efforts.” More plainly, the league is about to entangle itself further with political radicalism. Goodell and company may believe that the pact is good for public relations, but they could not be more wrong.

The NFL for many years has been a prime target of black political operatives in and out of the league. The active player roster across the league’s 32 teams, after all, is nearly two-thirds black. The activism paid handsome dividends when then-San Francisco 49ers quarterback Colin Kaepernick, newly reborn as a Black Lives Matter activist, instituted a pregame ritual during the 2016 preseason of kneeling down rather than standing at attention during the playing of our national anthem. His purpose was to protest recent fatal shootings by white police officers of “unarmed” blacks such as Michael Brown, Jamar Clark and Alton Sterling. In fact, in each of such cases, it was the deceased individual who had violently assaulted (and in Sterling’s case, killed) one or more cops. Kaepernick rationalized his crusade this way: “I am not going to stand up to show pride in a flag for a country that oppresses black people and people of color.” It was a completely false summation, but it won a lot of supporters around the league through 2016 and well into 2017.

By the fall of 2017, an increasingly nervous Commissioner Goodell, and the billionaire team owners at whose pleasure he serves, were walking a tightrope. On one hand, they didn’t want to alienate large numbers of fans who wanted to watch football without being hectored about their “racism” or other moral shortcomings. On the other hand, they didn’t want to alienate black players who might go on strike if they felt ignored. A surrender with a smiling face seemed inevitable. And it happened on November 29, 2017. A group of team owners and black players reached an agreement under which the NFL would divert at least $89 million over seven years, much of it paid by the owners, to various radical nonprofit organizations. It was a very expensive shakedown insurance policy.

As is usually the case with such agreements, however, capitulation has led to more capitulation. The main provocateur this time around is Shawn “Jay-Z” Carter, who via his Manhattan-based entertainment conglomerate, Roc Nation, has attained a Forbes magazine-estimated personal net worth of about $1 billion (his wife, singer/actress Beyonce herself is worth $400 million). Carter made the NFL an offer it couldn’t refuse. And the league accepted.

On August 13, the NFL and Jay-Z announced a partnership that, as the league website puts it, will “nurture and strengthen community through football and music, including through the NFL’s Inspire Change initiative.” Jay-Z is delighted. “With its global reach, the National Football League has the platform and opportunity to inspire change across the country,” he said. “Roc Nation has shown that entertainment and enacting change are not mutually exclusive ideas – instead, we unify them.”

Let’s cut through the spin. The “change” sought by Jay-Z and his allies is a recipe for racial divisiveness and even violence. Under NFL cover, he can be counted on to advance crackpottery. Back in July 2013, for example, he and wife Beyonce appeared in Harlem as guests of Reverend Al Sharpton outside the offices of Sharpton’s National Action Network. The occasion was a rally/vigil to protest the Florida state jury exoneration of George Zimmerman, a neighborhood crime watch volunteer accused of murdering a black teen, Trayvon Martin, about a year and a half earlier. The charge was utterly unwarranted; Zimmerman, as evidence showed, fired his gun to save his own life. At the rally, the protesters, led by Martin’s parents, demanded (but ultimately did not get) a federal civil rights prosecution of Zimmerman.

Needless to say, Jay-Z is insisting that the league pressure team owners to sign Colin Kaepernick, who in 2017 filed a grievance against the league for allegedly colluding to keep him unsigned. He entered a confidential settlement this February for a reported sum of less than $10 million. Jay-Z has said he would “100%” advise the former 49ers quarterback to continue denouncing “racism.” He’ll have help from elsewhere in the hip-hop world. In February 2018, Grammy-nominated female rapper Cardi B remarked that if the NFL asked her to perform at a game halftime or some other venue, she would do so only “when they hire Colin Kaepernick back.”

The NFL prefers to look on the sunny side of things. As Commissioner Goodell puts it, the league and Roc Nation “share a vision of inspiring meaningful social change across our country.” The league’s Inspire Change project, formed following that $89 million agreement, plans to step up its outreach to minority communities on such issues as criminal justice reform, educational progress and police-civilian relations.

This “vision” is misguided. The NFL is not a political action committee or an advocacy think tank. It risks alienating large swaths of its fan base by behaving as though it is. Ironically, if history is any guide, this effort not only will not buy good will from the league’s accusers, it will whet the accusers’ appetites even more.

That’s how racial shakedowns work. There is no one “last” payment – only the last one for now. Football fans should remember this as the NFL gears up for the new season.