Carl Horowitz
|
Posted: May 03, 2019 11:33 AM
Share   Tweet
The opinions expressed by columnists are their own and do not necessarily represent the views of Townhall.com. 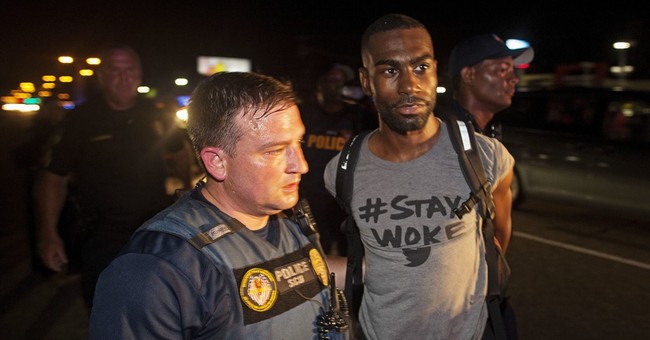 The network of street and campus demagogues known as Black Lives Matter pretty much has operated with impunity since its founding. But a court ruling late last month could make these social media-based grievance peddlers think twice before targeting cops.

On April 24, a three-judge panel of the U.S. Court of Appeals for the Fifth Circuit unanimously ruled that an injured Baton Rouge, La., police officer has legal standing to sue DeRay Mckesson (he prefers not to capitalize the “k”), Black Lives Matter’s unofficial mouthpiece and most visible organizer. Mckesson, the complaint read, in coaxing a large group of demonstrators to block traffic on a highway back on July 9, 2016, created the conditions for the attack on the officer, identified only as John Doe. The decision overturns a district court ruling. And it is the right call.

Black Lives Matter (BLM), now with dozens of chapters across the U.S., came together in July 2013 following the justified acquittal by a Florida state jury of George Zimmerman, a white neighborhood patrol volunteer charged with murder in the shooting death of a black teen attacker, Trayvon Martin. The group attained a national profile in August 2014 when it sponsored continuous street rallies in Ferguson, Mo. to protest the police shooting death of an “unarmed” young black adult, Michael Brown, who in fact had violently assaulted the officer only a minute or two before. Rioting occurred that month, and again more destructively, that November after a county grand jury decided not to indict the officer.

With Black Lives Matter, the preordained script is “white oppressor, black victim,” regardless of location.

It was about 12:30 AM, July 5, 2016. Baton Rouge police had just received a “911” call about a large black male pulling a gun on someone in front of a convenience store. The man, Alton Sterling, was upset that this person objected to his selling bootleg CDs there. Sterling, who had a lengthy criminal rap sheet, also happened to be carrying a loaded .38 pistol in his pants. When two officers, both white, arrived on the scene, Sterling reacted aggressively, provoking a violent altercation. During the fracas, Sterling was observed reaching for his gun. In response, one or both officers shot him multiple times. Though rushed to the hospital, it was too late. Sterling had died. Bystander and police bodycam videos recorded the incident.

Radical activists across the country fumed. For days, Baton Rouge was the focal point of BLM anti-police rallies. Then, on July 17, things turned deadly. A black separatist from the Kansas City area named Gavin Long ambushed and shot six law enforcement officers. Long would be shot dead by a SWAT team, but not before three of the wounded officers – two white and one black – also died.

Here is where the lawsuit comes in. On the night of July 9, about a week prior to Long’s wanton vengeance, a Black Lives Matter rally in Baton Rouge also could have turned lethal, thanks in part to the group’s roving ambassador, DeRay Mckesson. A Baltimore native, Mckesson led demonstrators onto Airline Highway, right near police headquarters, for the purpose of blocking traffic. Police made more than a hundred arrests after the crowd refused to move. One of those cops, the aforementioned “John Doe,” was hit in the head by a concrete block, which caused injuries to his jaw, brain and head, and also knocked out one or more teeth.

DeRay Mckesson was among those arrested. Though not wearing his trademark blue Patagonia down vest (it was hot that night), he was conspicuously egging on the crowd. Officer Doe seemed aware of that. After his emergency hospital stay, he filed a federal damage suit against Mckesson. By inducing protestors to block traffic, he argued, Mckesson created the conditions for the ambush.

Unfortunately, U.S. District Judge Brian Jackson, an Obama appointee, wasn’t receptive to Doe. On September 28, 2017 he dismissed the case with prejudice, concluding that BLM is a social movement and thus lacks the capacity to be sued. The plaintiff, added Jackson, “utterly failed to state a plausible claim” and instead launched a “confused attack” against Black Lives Matter and other demonstrators. A more reprehensible ruling would be hard to imagine. Here was a cop who had suffered life-threatening injuries accused of being the attacker.

Doe appealed. And procedurally, he has prevailed. On April 24, the court ruled 3-0 that the officer’s suit can go forward. Judge E. Grady Jolly wrote: “Given the intentional lawlessness of this aspect of the demonstration, Mckesson should have known that leading the demonstrators onto a busy highway was most nearly certain to provoke a confrontation between police and the mass of demonstrators…”

Adding to this welcome news were decisions by federal and state authorities not to prosecute the officers in the Alton Sterling shooting. Just two days after Sterling’s death, the U.S. Department of Justice had opened a civil rights probe. On May 2, 2017 the department announced that it would not file charges. After the announcement, State Attorney General Jeff Landry announced that he would investigate possible violations of the Louisiana Criminal Code. In March 2018, his office announced that the officers acted in a “reasonable and justifiable manner.”

DeRay Mckesson reacted to the new civil suit ruling this way: “I’m disappointed and troubled by the 5th Circuit’s reversal of the district court decision. I am currently exploring my legal options and will respond formally soon.” The rest of us, meanwhile, can take pleasure knowing that Black Lives Matter, a rent-a-riot social media network, is less than invincible. Perhaps Officer Doe now will get the monetary relief he deserves.