Carl Horowitz
|
Posted: Sep 20, 2018 12:01 AM
Share   Tweet
The opinions expressed by columnists are their own and do not necessarily represent the views of Townhall.com. 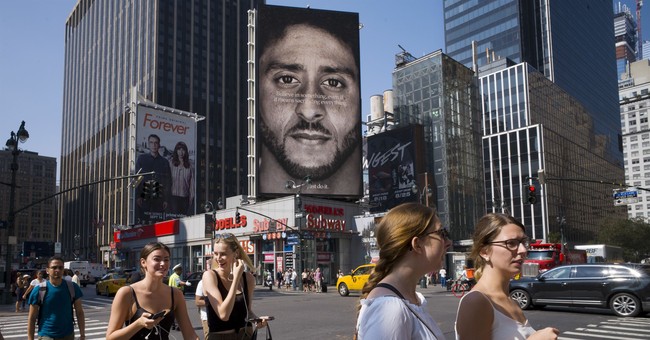 Buying a pair of athletic shoes shouldn’t be a political act. But Nike, the world’s largest maker of athletic shoes, thinks otherwise. And it might lose customers as a result. On Thursday evening, September 6, the company aired its widely anticipated two-minute “Just Do It”-themed ad on NBC-TV during the 2018 NFL season opener narrated by Colin Kaepernick, the former San Francisco 49ers quarterback who two years ago started the ritual “kneel-down” national anthem protests. He remains a factually-challenged moral exhibitionist who has built a cult upon the false claim that local police forces across the nation are murdering innocent blacks. The campaign might boost Nike sales in the short run, but market surveys suggest that it might not end well.

For a man whose name is radioactive around the National Football League, Colin Kaepernick’s career shift is paying off. During the 2016 exhibition season, he chose to kneel rather than stand for the pregame playing of “The Star-Spangled Banner” as a protest against what he saw as a police pogrom against innocent blacks. The claim was patently false. Yet this moral theater quickly caught fire among the league’s black players during the regular season and beyond. Kaepernick became a hero to Social Justice Warriors, winning accolades from Sports Illustrated, Amnesty International, the National Education Association and other arbiters of public opinion. Having opted out of his contract with the 49ers after the 2016 season during which the team had compiled a 2-14 record, he has not played in the NFL since. He filed a grievance against the league last October, claiming team owners were colluding to deny him employment in retaliation for his “leadership for equality and social justice.”

Having reinvented himself as a conscience of our nation, Kaepernick is now the object of obsequious fawning by Left-leaning cognescenti, eager to promote symbolic rebukes to Donald Trump. Nike Inc., a company with around $35 billion in annual sales, wants in on the fun. The 30th anniversary of its “Just Do It” campaign is providing the pretext. Early this month, the company announced it had signed Kaepernick to a lucrative marketing contract that gives him his own line of footwear, shirts, jerseys and other items. According to Charles Robinson of Yahoo! Sports, the contract is worth millions of dollars a year plus royalties.

In short order, the Kaepernick-narrated two-minute television commercial, buoyed by a Twitter pre-release, debuted during the Atlanta Falcons-Philadelphia Eagles season opener. The ad was an edgy photomontage of sports heroism. Its uplifting, beat-the-odds message, replete with footage of aspiring and prominent athletes, many of them black (e.g., LeBron James), clearly was geared toward a young, multicultural audience. “Calling a dream crazy is not an insult,” Kaepernick declared in his voiceover. “It’s a compliment.” The message was self-empowerment. But it’s the messenger who’s getting most of the attention.

Will Colin Kaepernick boost Nike sales? Some marketing industry insiders say it will. “It’s not a move that any company can make, but for Nike it’s definitely smart business,” said Bob Dorfman, a sports marketing analyst with the San Francisco-based Baker Street Advertising. Aaron Goldman, chief marketing officer for the Chicago-based 4C Insights, remarked, “You can be darned sure that Nike has done its research and knows what will move its product and who this campaign will resonate with.”

Yet social justice crusading may be only part of the picture. Less publicized is the fact that Nike is feeling the heat from its main competitor, Adidas. Where Nike sales in North America were up 3 percent for 2017 over the previous year, Adidas sales were up 25 percent. Nike remains profitable and likely will remain that way in light of its recent renewal of its partnership with the NFL through 2028. But in the world of footwear, like that of software, not moving ahead fast enough can be tantamount to falling behind. Colin Kaepernick, who right now is “hot,” might give Nike that extra boost.

Nike no doubt will lose customers, as it will gain others. How many of each, one cannot tell. Market research can anticipate the future, but it can’t predict it. People turned off by Nike’s hiring of Colin Kaepernick might wind up buying its products later on. The larger issue, however, is that there is a real downside to corporate decisions that hype or subsidize political radicalism, especially when its representatives promote racial grievance. And racial grievance is exactly what Colin Kaepernick has been selling these past couple years.