Cal Thomas
|
Posted: Dec 19, 2017 12:01 AM
Share   Tweet
The opinions expressed by columnists are their own and do not necessarily represent the views of Townhall.com. 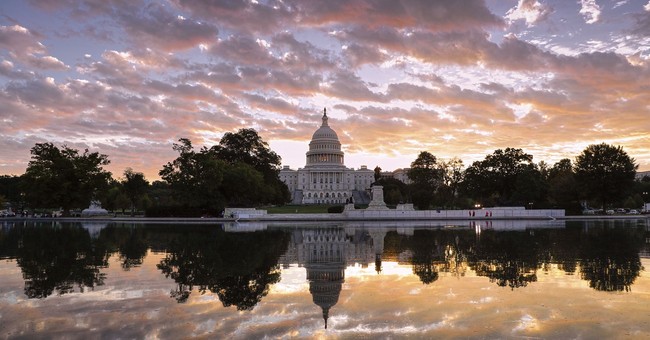 So, a Republican majority Congress has "reformed" the tax code for the first time in 31 years, allowing us to keep a little more of the money we earn. Woohoo!

Back in the day when my withholding exceeded my tax liability, I occasionally received a nice little refund check from the U.S. Treasury. The check had the Statue of Liberty on it, which was ironic given that high taxes are the antithesis of liberty.

During the debate over the tax bill, which is supposed to be passed Tuesday and quickly signed by President Trump, we heard a familiar question: "How will these tax cuts be paid for?" This from a Congress that has dug us a debt hole that now exceeds $20 trillion. "How do we pay that off?" should be the question. The answer: "Not with more of our money, but with less government spending."

Washington is taking in record amounts of money, but it goes out as fast as it comes in. Government doesn't lack revenue; it lacks spending discipline.

I'm all for the tax reform measure, but one thing is certain. When Democrats win back a congressional majority and the White House you can count on tax increases. It's what they do. It won't matter that the stock market is setting records with retirement portfolios expanding, or that the unemployment rate has declined. Offerings to the government must be made because to many liberal politicians, government is God.

Ronald Reagan cut taxes in 1986, but Bill Clinton raised them. If unnecessary and duplicative government programs and agencies were eliminated, if we stopped fighting wars we ought not to be in, if Social Security and Medicare -- the main engines of debt -- were reformed, the need for higher taxes would be reduced. We could then keep, spend and invest even more of our money and possibly motivate more people who are now dependent on Washington to enjoy the fruits of liberty, a job and the dignity that goes with supporting one's self and one's family.

That would be real reform, but it may be easier to kick a drug or smoking habit than to wean some people from government. Too many have bought into the fiction that government can solve everything, when history has shown that it can solve very little. One does not have to look far for evidence of this.

In some U.S. states and in countries where smaller, less intrusive government has been tried, less costly government works. Think Singapore, which has an unemployment rate around 2 percent because the country has no welfare for able-bodied people, and Hungary, which has cut corporate taxes from 19 percent to 9 percent and is experiencing economic growth approaching 4 percent. Think America when the tax cuts advocated by John F. Kennedy and Reagan produced economic booms.

Now that the tax code has been "overhauled," the next step should be to overhaul government. It has far exceeded the boundaries set for it by the Constitution. As a result, people have come to expect more from government than it can, or should, deliver, which has led to lower expectations for what citizens can achieve for themselves.

One of the biggest promoters of self-reliance was America's 30th president, Calvin Coolidge. Among many of his pronouncements about government, taxes and individual persistence was this gem: "A government which lays taxes on the people not required by urgent public necessity and sound public policy is not a protector of liberty, but an instrument of tyranny. It condemns the citizen to servitude."

The Republican tax bill may unlock a few of the chains on those who have been its servants. Now it's time for the servants to put those chains on Washington and reduce its size and out-of-control spending.