Be Careful What You Wish For

Cal Thomas
|
Posted: Feb 07, 2017 12:01 AM
Share   Tweet
The opinions expressed by columnists are their own and do not necessarily represent the views of Townhall.com. 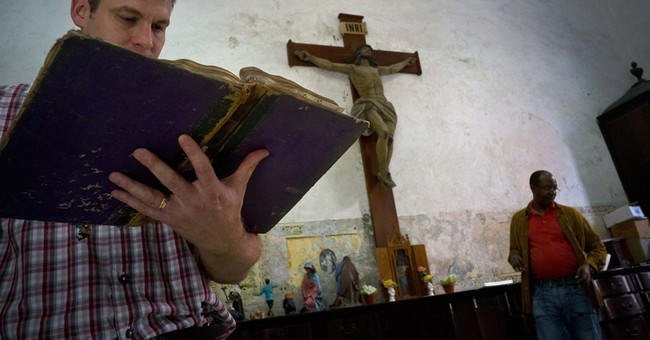 At the National Prayer Breakfast last week, President Trump promised to "totally destroy" the so-called "Johnson Amendment," a law that prohibits churches from endorsing or opposing political candidates at the risk of losing their tax-exempt status.

Politifact.com gives the background on how the amendment became law: "The restriction was championed by (Lyndon Johnson) in 1954 when Johnson was a U.S. senator running for re-election. A conservative nonprofit group that wanted to limit the treaty-making ability of the president produced material that called for electing his primary opponent, millionaire rancher-oilman Dudley Dougherty, and defeating Johnson. There was no church involved.

"Johnson, then Democratic minority leader, responded by introducing an amendment to Section 501(c)(3) of the federal tax code dealing with tax-exempt charitable organizations, including groups organized and operated exclusively for religious, charitable, scientific, literacy and educational purposes, or to prevent cruelty to children or animals. It said, in effect, that if you want to be absolved from paying taxes, you couldn't be involved in partisan politics."

Conservatives have argued that the Johnson Amendment limits the free speech of pastors and ignores the history of the nation. They also claim the law is applied unevenly, especially when it comes to African-American churches, which have a long history of inviting mostly Democratic political candidates to speak in their churches and on occasion endorsing them without having their tax-exempt status challenged by the IRS.

Opponents of the amendment have a point, but there is a larger one. From the founding of the nation, through the Civil War when fiery pro- and anti-slavery sermons were heard from pulpits, to Prohibition, to contemporary examples, the ordained have played active roles in the nation's political and social life. Pastors should be as free as anyone to speak their minds on political issues, but should they do so from the pulpit? By focusing more on the temporal than the eternal there is the risk of diluting the power in their primary message.

There are legitimate concerns that government is not sufficiently protecting people whose consciences forbid them from participating in activities they consider immoral. Recent examples include lawsuits against Christian bakers and photographers who have refused service to people whose lifestyles offend their beliefs. The Obama administration ordered The Little Sisters of the Poor to provide contraceptives to staff members as part of their health insurance in contravention of Catholic teaching.

The subtle temptation for evangelicals to engage in partisan politics dilutes their primary message. If I go to a political rally, I expect to hear political speeches. When I go to church, I am expecting soul food.

Many political views are represented in my church. If the pastor began preaching on politics he would find people, including me, headed for the exits. There is also the presumption that people are uninformed, needing a pastor to tell them what to think. This is as silly as the notion that conservatives listen to Rush Limbaugh in order to know what to believe.

Yes, Congress should repeal the law prohibiting preachers from talking about politics from the pulpit while passing a new law protecting the consciences of believers. The larger question is: should preachers preach on politics and to what end?

Muslims would have to be included. How comfortable would those conservatives now campaigning for repeal of the Johnson law be if some imams began preaching death to America and endorsing Muslim candidates for political office? Would the repeal lead to activist mosques supporting terrorist groups? It's already happened in the Holy Land Foundation case where the government alleged money passed through the charity to support Hamas, a designated foreign terrorist organization.

Whether the Johnson law is repealed, or not, evangelicals have a more powerful message than partisan politics. Senate Chaplain Barry Black referenced that power by quoting from an old hymn at last Thursday's prayer breakfast: "My hope is built on nothing less than Jesus' blood and righteousness. I dare not trust the sweetest frame, but wholly loan on Jesus' name. On Christ the solid rock I stand, all other ground is sinking sand." He said that includes government institutions.

Isn't that a better message for conservative Christians to preach than the sinking sand of partisan politics?