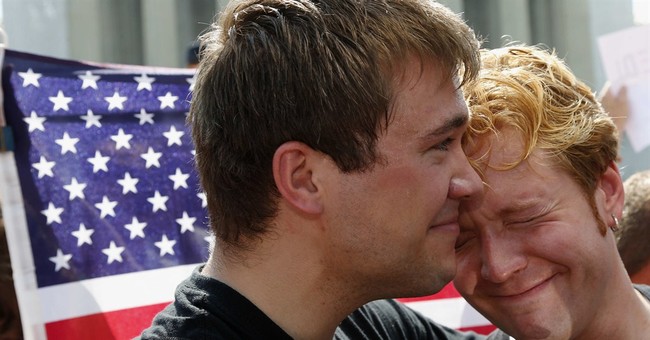 "For this reason a man shall leave his father and his mother, and be joined to his wife; and they shall become one flesh." -- Genesis 2:24, NIV

The problem for people who believe in an Authority higher even than the Constitution is that in our increasingly secular and indifferent society, it has become more difficult to persuade those who do not subscribe to an immutable standard to accept that view. It is nearly impossible to restrain a people intent on throwing off any and all restraints. History is full of examples of empires that collapsed from within before they were conquered from the outside.

The Supreme Court has narrowly, but effectively, removed another standard on the way to full acceptance of its right to redefine marriage and raise itself to a level higher than the Creator. What or who is to stop them? Various religious-political groups formed over many years to confront cultural erosion are in retreat and increasingly ineffective.

Modern courts might have trouble with Thomas Jefferson's declaration, "We hold these truths to be self-evident." Is there anything that is self-evident today and not subject to challenge given the right circumstances?

Even a secular person should be required to answer a question before removing such an important cultural underpinning as traditional marriage: If marriage is no longer to be reserved for one man and one woman, as it has for millennia in many different cultures and religions, what is the new standard and on what is it based? Should we change America's motto to "in polls we trust"?

The New York Times recently editorialized in favor of transgender rights. Polygamist groups have made it known they wish to be next in line to enjoy full constitutional protection for their lifestyle. Utah was forced to outlaw polygamy before admission to the Union. Can it, should it, revert to its previous practice and who has the authority to say "no"?

There are people who favor sex and marriage between adults and children. On what basis should they be denied their "right to happiness"? Today's "that goes too far" easily becomes tomorrow's "right" with a morally vacuous media leading the charge and a morally exhausted people who are afraid to say "stop," for fear they'll be labeled "bigots."

Boundaries serve a purpose, in sport and in life. Fences keep out trespassers and protect children on playgrounds. Governments impose speed limits. Lines define a football field. The problem faced by moral-political forces -- from Prohibition, to abortion and now same-sex marriage -- is that they are confronted by growing numbers of people who do not believe in, or can be persuaded by, ancient, even biblical, instruction constraining human behavior. Many young people whose parents are divorced, or who are cohabiting without marriage, are not influenced by such commands or "preaching."

While the Supreme Court's 5-4 decision overturning the Defense of Marriage Act does not establish a constitutional right to same-sex marriage, that's where it seems headed. Justice Antonin Scalia predicted it would a decade ago when the Supreme Court invalidated laws prohibiting homosexual conduct in Lawrence v. Texas.

One doesn't have to approve of the Court's "reasoning" in order to hand it to the gay rights campaigners. They have done a magnificent job advancing their objectives, but they couldn't have done it alone. A verse from the Old Testament warns about the detrimental effects such "advances" can have on individuals and nations that abandon moral boundaries: "In those days Israel had no king; everyone did what was right in his own eyes." -- Judges 17:6, NIV