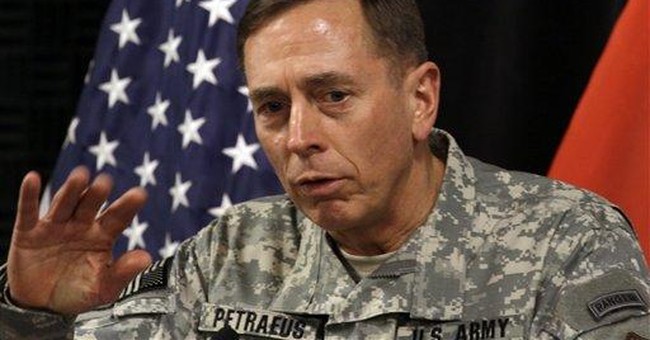 Plagiarism, as defined by dictionary.com, is "the unauthorized use or close imitation of the language and thoughts of another author and the representation of them as one's own original work."

In 1987, then-senator and presidential candidate Joe Biden was accused of plagiarizing from a speech by then-British Labour Party Leader Neil Kinnock. Biden eventually withdrew after a media firestorm, which was egged on by the eventual 1988 Democratic nominee, Michael Dukakis.

Now Vice President Biden is involved in a more serious act of plagiarism. He is trying to take credit for progress in the Iraq war, which he, then-Senator Barack Obama and many Democrats opposed, calling it a failure.

On CNN's "Larry King Live" last week, Biden shamelessly claimed: "I'm very optimistic about -- about Iraq, and this can be one of the great achievements of this administration. You're going to see 90,000 troops come marching home by the end of the summer. You're going to see a stable government in Iraq that is actually moving toward a representative government."

Isn't that the result of the Bush administration's surge, which Senate Majority Leader Harry Reid said wouldn't work? Is it possible to plagiarize a war?

In a September 9, 2007 appearance on "Meet the Press," Tim Russert asked Biden about a letter Gen. David Petraeus had written to his troops. Petraeus said, "My sense is that we have achieved tactical momentum, have wrested the initiative from our enemies in a number of years in Iraq. We are, in short, a long way from the goal line but we do have the ball and we're driving down the field."

Biden replied, "He's dead, flat wrong. The fact of the matter is ... these security gains we've made have had no impact on the underlying sectarian dynamic. None. None whatsoever. Can anybody envision a central government made up of Sunni, Shia and Kurds that's going to gain the trust and respect of 27 million Iraqis? ... There have been some tactical gains, but they have no ultimate bearing, at this point, on the prospect of there being a political settlement in Iraq that would allow American troops to come home without leaving chaos behind."

President Obama said much the same on Jan. 10, 2007: "I am not persuaded that 20,000 additional troops in Iraq is gonna solve the sectarian violence there. In fact, I think it will do the reverse."

But it did work and the credit should go to President Bush and Vice President Cheney, but this administration can't give credit to its predecessors because it has been too busy flogging them for problems that didn't begin with Obama and Biden, but have been exacerbated by them.

Rush Limbaugh juxtaposed these then-and-now sound bites from Biden and Obama on his radio program last week. The transcripts are posted on his Web site (www.rushlimbaugh.com/). This shameless self-portrait by Joe Biden, as if the Obama-Biden administration devised and executed a war strategy that has put Iraq closer to self-rule and denied the terrorists a base, is jaw dropping even by Washington standards.

What ought to frighten everyone is that Obama and Biden are now running the country. If their judgment failed them when they were pursuing higher office, why should the public have confidence in their judgment now that they have been in office for nearly 13 months? This is more than politics. It is the difference between life and death, victory and defeat in the most important war this country has fought since its inception.

Perhaps the most outrageous claim about Biden's role (or lack of) in Iraq came from White House Press Secretary Robert Gibbs, who said, "The vice president's been deeply involved in fixing the political process there so that elections can be held and our troops can come home as scheduled this summer."

It is impossible to reconcile that claim with Biden's numerous defeatist statements. That Biden -- and Gibbs -- now say something else, is not just factually incorrect, but plagiarism of the worst kind.