You've Got to Live... a Little 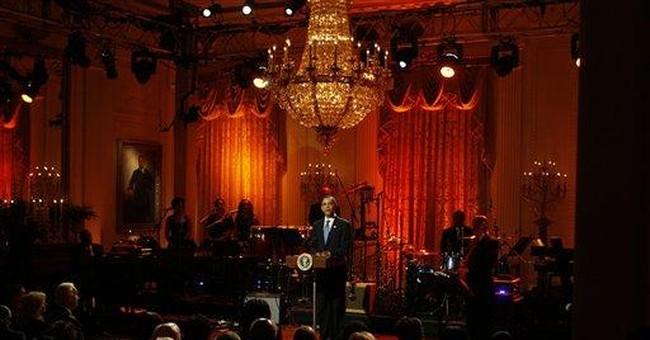 At first it seemed like a great idea. President Obama, fresh from good reviews for his appearance at the House Republican retreat two weeks ago, invited Republican leaders to Blair House in Washington for negotiations on a health insurance reform bill. But the essence of negotiation is in its definition -- "to deal or bargain with another or others." Or, to quote an old song lyric: "You've got to give a little, take a little, and let your poor heart break a little." We know what the president is willing to take, but what is he prepared to give?

The glory of love (the title of the song from which the above lyric is taken) is in giving and taking, so why isn't the story the same for political negotiations? For one brief shining moment it appeared politicians might actually do something that benefits the country. Polls show a majority of the public reject "Obamacare," which is actually Reid-Pelosi-care. The president has submitted no bill. After raising hopes that a compromise might be had, the president on Tuesday met with Republican leaders for two hours and told them his core concerns remain nonnegotiable. So what's to negotiate?

Some of the president's goals closely resemble Republican objectives: lowering health-case costs and expanding coverage to the uninsured. The problem is the president and the congressional Democratic leadership wants to expand government controls and raise taxes, while Republicans favor an approach tilted toward the free enterprise system.

House Republican Leader John Boehner (R-OH) and GOP Whip Eric Cantor (R-VA) sent a letter to White House Chief of Staff Rahm Emanuel. In it they noted that legislation to "opt out" of Obamacare has been introduced in 36 states. Boehner and Cantor want the nation's governors and state legislators to be invited to the president's Feb. 25 health care "summit." Even the Virginia State Senate, which is controlled by Democrats, has passed a measure protecting individuals from being compelled to purchase health insurance.

Republicans have the political advantage, not only on health care, but also on national security, which has in recent years been the party's strongest issue. Republicans delivered a rapid response to a USA Today editorial by John Brennan, assistant to the president and deputy national security adviser for Homeland Security and Counterterrorism. Brennan said that "unfounded fear-mongering only serve(s) the goals of al-Qaida." What about founded fear-mongering, or just plain legitimate fear about the way the administration is handling terrorists and Iran? (The president has called for more sanctions, which are as useful as a U.N. resolution.)

The country's top intelligence officers predict another attempted terrorist attack within the next three to six months. Are they "fear-mongering"? If the attack succeeds, what will the administration do? Issue strong denunciations? Call for a U.N. resolution? Appease our enemies again?

Republican candidates for the House and Senate are ahead in polls in many states. GOP optimists believe they could take back Congress. The question is: what will they do then? First, they should promise to stop Obama's progressive-liberal-socialist (take your pick) agenda. Second, they must find a strong presidential candidate who will bring experience and a realistic worldview to the problems that confront us abroad and at home.

The stage is being prepared. There is room in the wings. Who will it be? Whoever it is, he (or she) had better be ready to take over from what appears to be a failing presidency. The country can't afford eight full years of Barack Obama. We'll be fortunate to survive the next three.