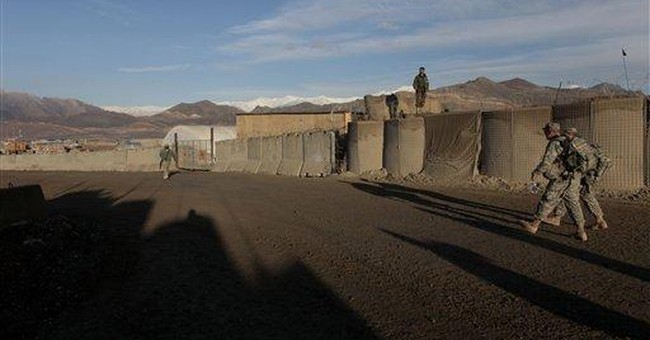 President Obama should be commended for committing 30,000 additional troops to Afghanistan to root out al-Qaida and stabilize major portions of the country. I am far less certain about establishing a timetable, though the president did say it depended on conditions on the ground. This isn't like telling your college student he has so many months to stop partying and get his grades up or the tuition gets cut off. In this war, a timetable can only encourage the enemy to hang on until we depart.

The president is likely to get more support for his decision from his critics on the right than his liberal supporters, who are still living under the misconception that we can stop wars by not fighting them. As the president said at West Point, we didn't attack al-Qaida; they attacked us.

Opinion polls, while volatile, continue to show that the public doesn't want to lose this war. According to a USA Today/Gallup Poll (Nov. 20-22, 2009), 60 percent of the public does not believe the United States made a mistake when it attacked al-Qaida in the aftermath of Sept. 11, 2001. Only 36 percent believe we did. According to a CBS News/New York Times Poll conducted in February 2009, 89 percent supported the war effort in October 2001. What is remarkable is that the support level has not declined further given America's preference for short conflicts.

There is a cautionary note in the polling. Only 30 percent in the USA Today/Gallup Poll think the war is going "moderately well." Forty-five percent believe it is going "moderately badly" and 21 percent think it is going "very badly." That is no doubt why the president laid down markers for the Afghan government to meet. But will it? Can it? We saw how long it took to train Iraqis to take over from U.S. forces. Afghanistan is not Iraq. It is far more complicated.

A CBS News Poll (Nov. 13-16, 2009) indicates support for the president's management of the war continues to decline. As recently as October, the president's approval-disapproval numbers were 42 percent and 34 percent. Last month's poll showed public approval had flipped with 43 percent disapproving of his handling of the war and only 38 percent approving of it. The surge could change that, as the Iraq surge changed President Bush's approval numbers.

The problem for the public and for political leaders is that there has never been a war like this one. We are making up the strategy as we go. Unlike our enemies whose only focus is killing Americans, destroying our economy and imposing Sharia law, we battle political correctness and the false notion that we can make terrorists like us by being nice to them. In fact, the only thing terrorists understand is power and resolve. They must be crushed, not accommodated, and not with kindness.

The failure of the Obama brand of diplomacy is on display in Iran. After several overtures to President Mahmoud Ahmadinejad and lots of speeches stressing diplomacy, Iran has announced plans not to dismantle its nuclear program, but to build 10 more nuclear facilities, ignoring U.N. resolutions and IAEA pleadings.

Democrats have a problem. Following 9/11 they supported the war, but when polls showed public approval declining, they criticized it in hopes of bringing down President Bush's approval numbers. The party's liberal wing is increasingly against the war, but now that President Obama has ordered more troops to Afghanistan than President Bush, the president and his party effectively "own" it. Which is too bad, because this war ought not to "belong" to one party or persuasion. It is America's war to win or lose. Americans of all political stripes should hope and pray the president's strategy works, not for any political benefit he might derive, but for America's sake.