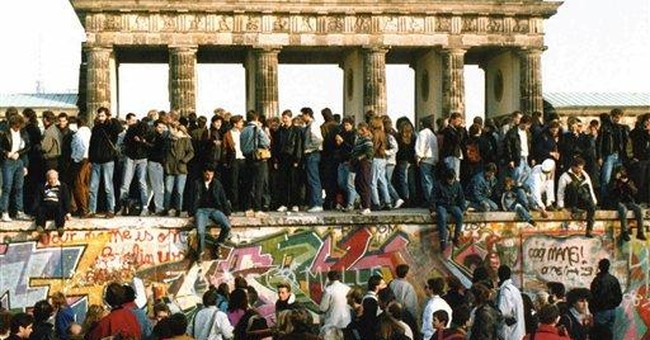 On Nov. 9, 1989, the Berlin Wall was pulled down to the consternation of leftists, who still had faith socialism could work with the right leaders, and to the delight of conservatives, who believed that socialism and communism guaranteed mutually-shared poverty.

Two years later, the Soviet Union crumbled. Soviet communism might not have endured for 70 years had it not been for enablers in academia, religion and journalism. Lloyd Billingsley has written about them in "The Generation That Knew Not Josef," as in Stalin.

When the wall fell, leftists could not bring themselves to admit they had been wrong, much less apologize for their misplaced faith. So they did what they do best: they made excuses.

The Media Research Center (MRC) has compiled reports, editorials, articles and commentary that extend over the last 22 years revealing how the pre-Fox, pre-talk radio liberal media were the handmaidens of one of the greatest totalitarian evils to strike the planet. The underlying myth in much of their "reporting," notes the MRC's Rich Noyes, was that free market capitalism was a greater threat to human happiness than communism.

In 1987, before the wall collapsed, CBS anchor Dan Rather said, "Despite what many Americans think, most Soviets do not yearn for capitalism or Western-style democracy."

Strobe Talbott, then of Time magazine and soon to be an influential member of the Clinton administration, wrote on Jan. 1, 1990, "(Soviet leader) Gorbachev is helping the West by showing that the Soviet threat isn't what it used to be, and what's more, that it never was." How is it possible to simultaneously have been a threat, but not a threat? The millions who died in gulags, starved to death or were assassinated might have a different interpretation of Russian history under communism.

After the liberation of Eastern Europe, according to the MRC, some journalists attacked capitalism for "exploiting" the newly freed workers. A Los Angeles Times reporter touted "communism's 'good old days,' when the hand of the state crushed personal freedom but ensured that people were housed, employed and had enough to eat."

In fact, Soviet communism spread misery through its own 12 time zones and in many parts of the world, though NBC's John Chancellor refused to see it. In 1991, as the Soviet coup unraveled, Chancellor said, "the problem isn't communism; nobody even talked about communism this week. The problem is shortages." Wait, according to the Los Angeles Times reporter, there were no shortages because everyone was housed, employed and had enough to eat? Both can't be true.

Ted Turner, the former CNN mogul, is always good for an outlandish quote and when it came to Soviet Russia, he offered a cornucopia of self-deluded statements, none better than this one: "(Gorbachev is) moving faster than Jesus Christ did." But Time magazine bested him with this howler when it described Gorbachev as both "the communist pope and the Soviet Martin Luther."

Never ones to admit failure for their favorite theories, the Left still refuses to acknowledge their errors. They simply moved on to new errors, in this case to Cuba. In 2006 an Associated Press story said, "For all its flaws, life in Cuba has its comforts. Many Cubans take pride in their free education system, high literacy rates and top-notch doctors. Ardent Castro supporters say life in the United States, in contrast, seems selfish, superficial and -- despite its riches -- ultimately unsatisfying." Is that why so many Cubans have risked their lives to reach America?

Again, Ted Turner on North Korean dictator Kim Jong-il: "I saw a lot of people over there. They were thin and they were riding bicycles instead of driving cars." An incredulous Wolf Blitzer replied, "A lot of those people are starving." Turner said, "I didn't see any brutality." (Read more at www.mrc.org.)

The point is not only to hold the media accountable for its past sins, but also to remind them they are making the same mistakes today with different enemies -- radical Islam and the Chinese brand of communism. No wonder the public trusts them about as much as they trust Congress.