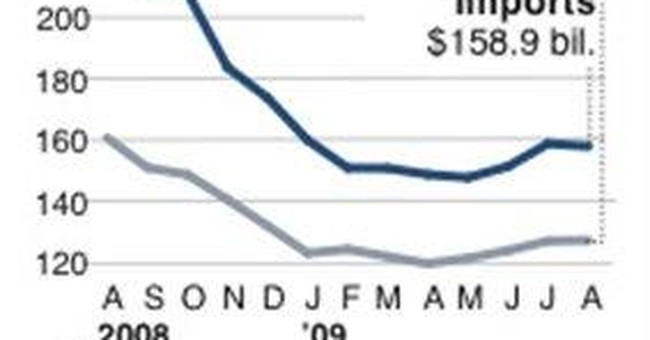 "That's just the way it is. Some things will never change..." (Bruce Hornsby song lyric)

The Washington Post headline sounds as if a comedy writer, or someone fluent in George Orwell's "Newspeak" wrote it: "Record-High Deficit May Dash Big Plans," it said.

As if a contributing factor to the projected record-high deficit of $1.4 trillion has nothing to do with big spending by this and previous administrations. Is there no end? Will we ever reach a limit where government says "no more, we've done enough; you're on your own now"? Apparently not. The "greatest generation" mostly lived within their means. They knew what it meant to go without all but essentials. Today, we think the sky is the limit when it comes to spending and that if we can conceive it, then we are entitled to it.

This is partly because of how dysfunctional Washington has become and partly due to our own sense of "what we are owed." Government can spend, tax and do whatever it wishes. If you oppose what it does, you are a selfish, greedy, rich elitist who cares nothing about people less fortunate than yourself. But wait. Did we have fewer poor people before government stepped in to "cure" poverty? Do we have fewer now? We aren't sure if the war in Afghanistan can be won, but we know the war on poverty was lost. Once, the prospect of an empty stomach motivated most people to get up and start chasing opportunity. Today, people can do whatever they want and government will bail them out with a welfare check (for the poor) or a corporate welfare check (for the rich). Bad decisions? No problem. Failure is no longer an option.

Thomas, you are such a racist and an uncaring person. You've been lucky and should have to pony up for the less fortunate.

How about showing the "less fortunate" the way to become fortunate? Does anyone hear a politician in either party encouraging people to do for themselves, instead of relying on government? And that goes for big corporations, too.

People who play by the rules, stay in school, refuse to take drugs, marry before having children and stay married, are no longer considered worthy role models by government, which has no intention of making them the norm. These norms have disappeared in a cloud of diversity and political correctness. Government now proposes to transform health insurance and tax responsible citizens at increased rates to pay for the votes, uh, benefits of others who are more content to take slices of other people's pies rather than learn to bake their own.

If you have been an honest businessperson and give money to your church and charities to help others who want to succeed but are having difficulty doing so through no fault of their own, that no longer matters. In fact, government proposes to reduce the deductibility of your charitable giving because government sees itself as more capable of charity than you.

That's what the Obama administration's proposal to send a $250 check to every senior citizen is about. Seniors won't get a cost of living adjustment in their Social Security checks next year because the cost of living hasn't gone up. But because seniors have become accustomed to an annual raise, the president apparently thinks by giving it to them anyway, he can buy their support for health care legislation that is not in their interest.

Washington's attitude toward those who make right decisions for themselves so as not to become a burden to government seems to be, "Good for you, but because you made all those right decisions ('right' being a relative term, so the government will say they were right FOR YOU), we will penalize your decisions and your success and take the money you earned and give it to others who didn't earn it because we want their votes so we can preserve our political careers."

To give those who ain't got a little more,

But it only goes so far."

For government, it's never far enough.