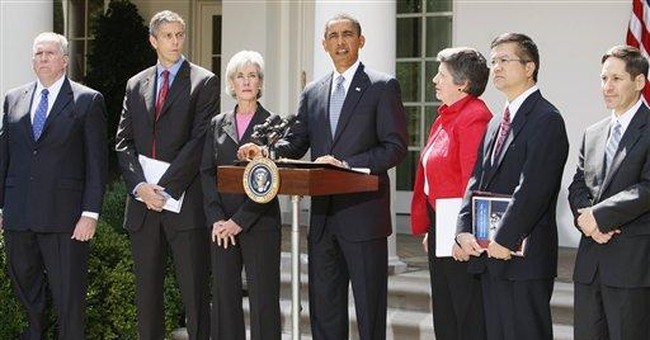 Despite their control of all three branches of government, this has not been a good summer for liberal Democrats. Their health care "reform" bill, which has yet to be fully written, much less fully funded, has been exposed at town hall meetings as a power grab over life and death with the strong possibility that "do no harm" will be replaced by a utilitarian approach to treatment.

The cap-and-trade measure (dubbed "cap and tax" by the Wall Street Journal) appears in trouble. Closer scrutiny has revealed it as one more reach into our pockets by politicians who never have enough of our money.

As the first elections since President Obama's presidential victory approach, liberals are getting nervous that all this exposure is leaving them naked before an increasingly skeptical and angry public. The latest Rasmussen poll shows President Obama's approval rating has dropped to 46 percent, which, according to the Wall Street Journal, "demonstrates a substantial drop in presidential approval relative to other elected presidents in the 20th and 21st centuries."

The Washington Post is trying to provide life support for at least one Democrat who is in trouble. In a gift for the Democratic candidate for governor of Virginia, Creigh Deeds, the Post ran a front-page story above the fold last Sunday trumpeting its "discovery" of a 20-year-old thesis written by the Republican candidate, Bob McDonnell. In that thesis, McDonnell was critical of fornicators, those who have abortions and parents -- especially employed women -- who don't spend enough time with their children.

So that late-summer vacationers might get the point, the Post ran a follow-up story on Tuesday -- again front page -- about the "uproar" created (by the Post) over the thesis. It was accompanied by an editorial critical of McDonnell's views. But on June 11, a Post editorial said, "Democrats ... will try to depict former attorney general Robert F. McDonnell ... as a right-wing zealot and Pat Robertson protege. In fact, both candidates are serious public servants with long records that deserve more careful examination. ... Mr. McDonnell's tenure as attorney general, by most accounts, has been professional and not overtly ideological."

McDonnell now says that while remaining conservative on most issues, he has changed some of his views over the last two decades.

If the Post is so concerned about the fitness of McDonnell for governor because of what he wrote in a single thesis, why hasn't it been similarly aggressive in rooting out Barack Obama's records from Occidental College, Columbia University and Harvard? And does anyone -- especially McDonnell's opponent -- want to run on a pro-fornication platform? Even President Obama has said he wants to reduce the number of abortions in America. And who thinks parents spend too much time with their children?

Here is the way I believe it works at liberal universities. Some professors require their students to repeat back to them on test papers and in theses what the professors believe. Unless students hate Republicans, revile George W. Bush and Ronald Reagan, renounce God, support abortion and gay rights, they can sometimes expect a lower, even a failing grade. When my wife studied for her master's degree in counseling, she felt pressured to repeat her professors' beliefs instead of stating her own. A friend with a Ph.D. told her, "Write what they want and get the degree. Then you can counsel the way you like." This is academic freedom? It sounds like indoctrination. Why is it OK at liberal universities to tell professors what they want to hear, but not OK at conservative ones to do the same?

The Left is worried not only about the Virginia governor's race, but also the contest in New Jersey, where incumbent Governor Jon Corzine is 10 points behind Republican challenger Chris Christie, according to a recent Quinnipiac University poll. Senate Majority Leader Harry Reid isn't up for re-election until next year, but he already trails his likely opponent, Danny Tarkanian, by 11 points.

For growing numbers of people, the elections in Virginia and New Jersey can't come quickly enough and November 2010 is a date being circled in red on many calendars.