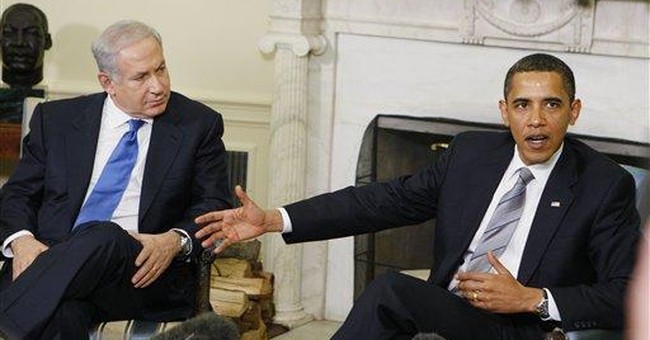 Things are not always as they appear in the Middle East. Appearances can also deceive whenever an Israeli prime minister and a U.S. president get together in Washington.

During their two-hour meeting at the White House on Monday, it appeared as though Barack Obama and Benjamin Netanyahu were bosom buddies. Netanyahu, especially, praised the new president and claimed agreement with Obama that, as a first priority, Iran must be stopped from possessing nuclear weapons.

A "senior official traveling with the prime minister" (one of those euphemisms required to disguise who is really speaking) told a small group of reporters and columnists following the White House meeting that, for the first time since the creation of Zionism, Jews and Arabs see eye-to-eye concerning the strategic threat a nuclear Iran would present. "This goal supersedes anything else," said the official. In response to questions, the official acknowledged that Arab leaders say one thing to their friends and something quite different to their enemies.

President Obama invoked an end-of-the-year timeline for diplomacy with Iran to work. This would seem to give Iran a green light to pursue its nuclear bomb for the next seven months. At the end of December when we in the West learn that Iran has been stringing us along and using diplomacy as a delaying tactic, what then? Will it be Israel that bombs the nuclear sites, or will it be one or more of those Arab nations supposedly of one mind in opposition to a nuclear Iran?

It's a safe bet to put your money on Israel doing the dirty work and suffering the usual condemnation -- accompanied by more terrorist attacks from Hamas and Hezbollah -- from the United States, the United Nations and the European Union, the latter two seeing nothing worth fighting to preserve.

A more sobering assessment has come from RAND, a nonprofit research corporation. In a new report entitled "Dangerous But Not Omnipotent: Exploring the Reach and Limitations of Iranian Power in the Middle East," prepared for the U.S. Air Force, RAND dismisses hopes that bilateral talks between the United States and Iran will alter Tehran's behavior. It calls such hopes "unrealistic" and advocates a broad international effort that would leverage incentives and punishment based on Iran's response. This has been tried before and has mostly proved ineffective because there are countries that do not abide by economic boycotts.

The senior Israeli official noted that while Israel has lived up to its obligations and commitments -- especially when it has come to relinquishing land taken from enemies who launched attacks from that land, and who would do so again if they get it back -- the Palestinian side has not. Does this not beg the question as to why any future promises should be believed when every previous promise has been broken?

Yes, for 60 years, Arab leaders have been captured by their own propaganda, as one member of the Israeli delegation told me. So how do you reverse that, I asked, and when can the world expect to see them stop publishing textbooks, delivering sermons and printing cartoons in state-owned newspapers that equate Jews with pigs and monkeys and call for their destruction? He couldn't say.

If there is to be a Palestinian state, what kind of state will it be? Would it be allowed to have an army, or a "police force" that would effectively serve as an army? Surely Israel could not stand for another armed force in its neighborhood. Would a Palestinian state be permitted to have an airport and overland access to countries that might supply it with terrorists and weapons?

A recent Washington Times editorial put it well: "The Obama administration should focus less on creating a Palestinian state and more on helping Palestinians earn the right to statehood." That is exactly the right order.

In 1996, Netanyahu came to Washington for the first time as prime minister to meet with President Clinton. I recall him warning the Clinton administration that the greatest threat facing Israel is the arming of Iran with nuclear weapons. He was a prophet then and that prophecy is now on the verge of coming true.

In a rebuke to the president's commitment to diplomacy, Iran conducted a missile test within hours after Netanyahu left Washington for Israel. If Iran gets a nuclear bomb, everything will change in the Middle East. Whatever dim prospects for peace there may be will come unraveled. That's why stopping Iran's nuclear ambitions trumps a Palestinian state and everything else.