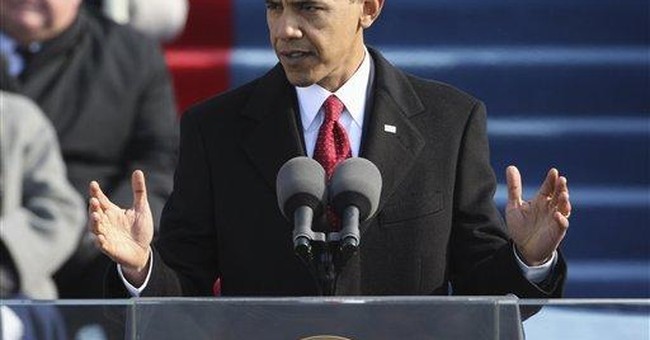 "What does change mean?" asked Woodrow Wilson in his inaugural address. That is a question which will soon be answered by President Barack Obama.

What surprised me most about Obama's speech was its lack of passion. It was lacking in the soaring oratory we have come to expect, especially when compared to other speeches he has delivered, most notably on Election Night. It seemed as cold as the subfreezing weather. Maybe he was trying to lower expectations. He succeeded.

Still, there were a number of themes which conservatives can praise. Among them, a message to terrorists that "you will not defeat us" and a pledge to eliminate wasteful government programs. That is easier said than done given that Congress will make those decisions, not the new president. Every government program attracts constituencies that argue how essential they are.

I enjoyed his line dismissing "worn-out dogmas" but wonder what he means by it. When a liberal dogma and a conservative dogma face off, which dogma will bite and which will roll over? When liberals talk like this, they usually require the conservative to compromise his principles in order to receive their blessing. During his relatively brief time in elective office, Obama has not been known for seeking common ground. Words ought to mean something. What does he mean by his?

Obama hinted at what he intends do about embryonic stem cell research and possibly "global warming," saying he wants to "restore science to its rightful place." What place would that be? Above morality and common sense? Above other scientists who disagree? There is no consensus about global warming. In fact, there are growing numbers of scientists and growing amounts of scientific evidence questioning whether this is indeed a dangerously warming planet. Will Obama rely only on those scientists who agree with his political positions?

On stem cell research, new science is showing that adult stem cells may fulfill the objectives originally believed to be achieved only with embryos. Which science will prevail in such cases? Will it be real science, or the "science" that supports the objectives of the liberal wing of the Democratic Party?

No one can deny the significance of Obama's moment. An Inauguration is a demonstration to the world of what makes America unique and great. Inauguration Day was the fun part. Now comes the hard part. The Wall Street Journal published a graph that showed every president but one since Harry Truman left office with a far lower approval rating than when he entered. The exception was Bill Clinton. With his approval numbers higher than any incoming president, Barack Obama cannot help but decline in public favor.

Part of this is due to our placing too much faith in politicians who cannot deliver all we want. Let's see how long the public continues to be enamored with him. And let's see how serious he is about finding common ground with conservatives.

The media coverage of the Inauguration gave a preview of how they might cover the Second Coming. It was total worship. No doubts were expressed; no questions about his ability to do anything -- from healing the economy to bringing peace to the Middle East. The media have at last found a god in whom they can believe. They are worshipping at the altar of the church of Barack Obama. Journalists and some of their ideological cable TV allies have so much invested in Obama's success that they will be hard-pressed to criticize him for anything and can probably be counted on to explain and justify any mistakes he makes, at least in the first two years.

In his inaugural address, Herbert Hoover spoke of America's "fruits of accomplishment." He added he had "no fears for the future of our country. It is bright with hope." There followed by just a few months the stock market crash of 1929 and the Great Depression. Hope can be dangerous if it is misplaced.

Alexander Pope wrote, "Hope springs eternal in the human breast; Man never Is, but always To be blest: The soul, uneasy and confin'd from home, Rests and expatiates in a life to come." ("An Essay on Man," 1733)

Pope's hope was in eternal life. Anyone who invests hope in temporal politicians is almost certain to be disappointed.