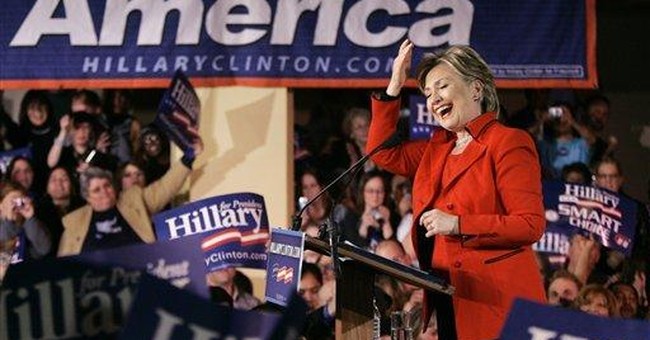 Suddenly inevitability is anything but inevitable. After being the inevitable Democratic presidential nominee, Sen. Hillary Clinton was being called upon by the newest inevitable nominee, Barack Obama, to withdraw from the race. But after her hard-won victories in Texas and Ohio on Tuesday, it's Obama who doesn't seem quite as inevitable. Though Obama continues to hold a slight lead in delegates and the math favors him over the remaining primaries, Clinton has shown that, like her husband, she might also lay claim to the name "comeback kid."

The Clintons are anything but quitters and with the question of what to do with Florida and Michigan's disenfranchised delegates still to be decided, along with the continuing behind-the-scenes campaign for the superdelegates, the Democratic contest is far from over.

With his Republican nomination victory, Sen. John McCain has at least one advantage and several disadvantages. The advantage is that he has the nomination. His main disadvantage is that many conservatives still don't trust him. They want to know as president whether he will work more with liberal senators like Ted Kennedy and Russ Feingold just to "get along," or will he stand on bedrock conservative principles regardless of what is said about him? Some conservatives wonder if his commitment to running a "civil campaign" means he won't be up to the fight.

McCain has to persuade conservatives not only that he will advance conservative principles as president, but also that he won't put getting along and feel-good notions ahead of playing smash-mouth politics when it is necessary to achieve political victory and advance a conservative agenda. Democrats play that kind of game and conservatives are not interested in awards from Miss Manners. After laboring in the trenches since the Goldwater years, they want victories. They don't care whether they earn praise from the left for the political equivalent of practicing good table manners.

Another McCain disadvantage is his speaking style. After eight years of the inarticulate George W. Bush, must we be forced to endure another president who can't ad lib a speech and has difficulty reading a teleprompter? In his speech after locking up the nomination Tuesday night, McCain must have said "my friends" at least a dozen times. It is a verbal crutch and cliche that quickly wears thin. There were some good lines in the speech, but the way McCain delivered it, the words sounded as if he were reading someone else's speech and not expressing his own beliefs. At 71, it's probably too late to send him to speech school, but surely some improvements can be made.

McCain's greatest advantage is himself. His life story is compelling and something neither Clinton nor Obama can match. He can own the issue of national security. He must now convince voters that on domestic issues he is better able to manage the economy while reducing the size and cost of government.

McCain's consistency on earmarks is a good start. But because the greatest costs are tied up in Social Security and Medicare, McCain must sell a plan that will transform these programs. Democrats will practice their usual demagoguery in the face of any attempt to fix what even they know are two programs in drastic need of repair, but if he can persuade the public on the need to reform our two biggest entitlement programs, he will do for these what Republicans did for welfare reform. And, like welfare reform, he can prove the critics wrong.

Knowing that the Clintons are not quitters, it will be fascinating to watch them deal with Florida and Michigan and the superdelegates. Will those two states hold new primary elections? Will there be a floor fight over the seating of delegates this summer at the Democratic convention in Denver? Will superdelegates that seemed to trend toward Obama before last Tuesday's primaries continue to do so, or will Sen. Clinton's victories freeze them in place?

There is nothing inevitable about any of this, which is why the 2008 presidential race continues to be the most fascinating in modern times.