Hillary’s Titanic is Headed Straight for an Iceberg: Trump - The Master Brander

Bryan Crabtree
|
Posted: Apr 22, 2016 12:01 AM
Share   Tweet
The opinions expressed by columnists are their own and do not necessarily represent the views of Townhall.com. 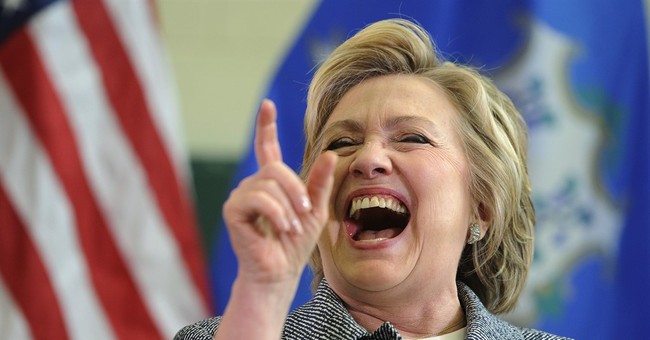 What’s worse than someone who is labeled a bigot, racist and a loose cannon like Donald Trump?  Hillary Clinton.  More than half of this country has forgotten what’s in the Clinton record.  Trump has already branded her “Crooked Hillary” and it seems to have stuck in the media.  Yes!  This is the same liberal media who typically gives no oxygen to the conservative candidates’ attacks on their rivals.  Not this year!

Remember, Trump successfully has branded Ted Cruz as ‘Lyin' Ted.’  He gave Jeb Bush the moniker ‘low-energy.’   He successfully branded Marco Rubio as ‘Lil’ Marco’ and effectively made him seem 20 years old with that one phrase.  Voters bought it.  Trump correctly identified his opponents weaknesses and crafted powerful phrases that resonated with enough voters to defeat his rivals in important contests.  Let's face it.  Cruz,  Bush and Rubio have less baggage, combined, than Hillary Clinton.

In preparation for the general election, I've been refreshing my memory on the horrific background of Hillary Clinton.  Being a steward of history, I was shocked at how much I had forgotten.  Many voters weren’t born when most of these Clinton-scams occurred and the rest have forgotten the vast majority of their crimes.

Hillary will try to frame the narrative that Trump is part of the war on women.   This argument is usually very effective.  It is so effective that in 2013 it cost Ken Cuccinelli the governor's race in Virginia.  Effectively his opponent, Terry McAuliffe, a Clinton-era politician, was able to convince voters that Cuccinelli thought women were stupid.  Cuccinelli mishandled his counter-attacks and thus validated the charges.  This won’t happen with Trump as his media coverage will best Clinton times three.

As to the war on women, Donald Trump employs more female executives in high-paying jobs than men.   Second, he is likely the first candidate that will actually ask Hillary Clinton the tough questions.  One of my listeners suggested she should be asked “when did she know her husband was a serial abuser and does she feel guilty for destroying his accusers?”  That’s a magnificent question that many women will likely want answered before considering a vote for her in the general election.

It's likely that Trump will educate the country on the fact that Saul Alinsky is one of her mentors.  His ‘Rules for Radicals’ suggests the use of a common enemy against a community.   In other words,  the best way to win an argument is to find a group of people and cast your opponent as the enemy of those people.   This works more effectively for people like Pres. Obama but it’s less likely to work for a criminal like Clinton (when also faced equal or better media coverage).  This ‘rule for radicals’ only works when the media is complicit in the attack.

There’s only one thing that interests the media more than supporting liberals:  money.  And, Donald Trump brings money through ratings.  Clinton does not.

Get ready.  It’s coming. We’ll be reliving the stories of Juantia Broaderrick, Kathleen Willey and Paula Jones who have all accused Bill Clinton of rape.   These stories alone neutralize any Hillary narrative about the so-called ‘war on women’ because she bullied each of these women to keep them quiet.

Let’s not forget the Vince Foster suicide and the oddities surrounding the removal of his briefcase.  I also believe the country has forgotten about Whitewater, the Rose Law Firm scandal and the fact that the Clinton Foundation has accepted money from terror states.

At some point, there will be a parade of former Goldman Sachs employees who will share accounts of Hillary Clinton's $250,000 speech. Currently, the best accounts we can find is that what Hillary Clinton says on Wall Street is nearly the exact opposite of what she says on Main Street.

Further suspicious is the Clinton Foundation's acceptance of tens of millions of dollars in contributions from donors who benefited from Clinton being Secretary of State.  During that time, she approved a uranium deal with Russian-owned Uranium One who’s leader contributed over $30 million to the Clinton foundation.  This fact is on top of the improprieties of the Clinton foundation's five years of tax returns they have been forced to amend due to improper reporting.

Even more powerful is the video showing Hillary Clinton laughing while being questioned about her defense of a client who is a child-rapist.  I wonder what Hillary thinks of Bill’s frequent travels to ‘pedophile-island’ on Jeffrey Epstein’s private jet.  It’s hard to ignore those flight logs and Epstein’s plea-deal.

What appears to be one of the most ridiculous movements ever in the Republican Party, #nevertrump has thrown everything including the kitchen sink at Donald Trump.  None of it has worked.  They tried eminent domain, stating that he kicked an elderly woman out of her home, Trump University lawsuits, Trump Mortgage, Trump Airlines and they tried to miscast most every  word out of Donald Trump's own mouth.   None of that sticks and it's unlikely to change the view of American voters.

The natural response to this article would be to point out Donald Trump's poll-negatives with women and even a majority of men.  These polls are called Viagra polls.  They get a rise out of all of us today but have little benefit tomorrow.  People’s minds can and will change.

Assuming Donald Trump is the nominee, and I believe he will be, Hillary Clinton is about to endure 40 years of pent-up demand best described as the truth.  Finally!

I have little doubt Trump will be able to shine the spotlight on Bill and Hillary Clinton that no politician has been capable of doing in the past.  This article shares just the tip of the iceberg Hillary’s Titanic will face.

It won’t work this time and if it does it will be the result of a divided Republican party.