Bruce Bialosky
|
Posted: Apr 08, 2018 12:01 AM
Share   Tweet
The opinions expressed by columnists are their own and do not necessarily represent the views of Townhall.com. 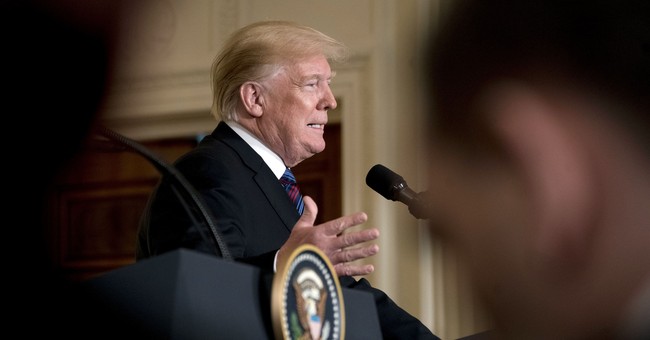 It has been 18 months since the release of a 2005 Access Hollywood tape of a private conversation between Donald Trump and Billy Bush, but it seems that the Left cannot let it go.  It might be because they were so convinced that the release one month before the 2016 presidential election would be the ice pick in the heart of the Trump campaign.  They cannot seem to leave it only, but they remain wrong in so many ways.

Yes, the comments on the tape were lewd, coarse, inappropriate and disgusting.  And the point is?There are bigger issues here.

The first is how despicable it is that someone taped a private conversation like this and kept it for over ten years.  Why would they keep it other than to blackmail someone?In this case they blackmailed someone in a different manner – they tried to bring down a presidential candidate.  Who among us, even the most pious, would want their private conversations taped and released upon the timing choice of others?

If it is not alright for you to be treated this way than why is it alright to use in a crass political manner?  Yet not one person I saw from the Left was willing to say that.Certainly, The Left wanted to use it during the campaign.  Saying the release was sordid mischief would have been politically imprudent, but they have had 16 months for redemption and not taken the opportunity.  As so often with the Left the ends justifies the means.

There are two even bigger points here:

What Trump said about some women throwing themselves at celebrities or rich men is sadly true.  There I said it.  The Left is unwilling to admit it except for in the case of Bill Clinton.  There were many things Trump said, but the one that cut to the heart of the matter was this phrase – “And when you're a star, they let you do it. You can do anything.”  Well maybe not anything and maybe not at your discretion, but there are too many women who encourage men of fame or fortune to have their way with them.

We all know this unless you have cut yourself off from mainstream society.  Just recently the story surfaced that baseball star, Daryl Strawberry, was having sex with women in the middle of games while with the New York Mets, using dugout employees as hound dogs to hunt out women who would participate in these episodes.  What would possess the women to do this is apparently quite clear.  He was famous and making a large salary.

Have things changed much since women threw their underwear on stage in the 1960’s at Tom Jones concerts?

A friend of mine told me that he was at a club in a private room with Prince, the recording artist. A woman was ushered in and performed oral sex on Prince and then left.  What would be the cause of this other than she bragged to her friends she did what she did with Prince.

I saw this in action myself when I was the tour accountant for ELO (Electric Light Orchestra) in the summer of 1978.  At the time they were the biggest band in the world and it was a huge, expensive tour.  ELO certainly did not have the reputation of the Rolling Stones, but was still a Rock ‘n’ Roll band.  Women made themselves available to band members and the supporting act we carried on the tour.  My God, for some reason they even made themselves available to me -- and I was just the tour accountant.  But for a 25-year-old male, it was quite a bonus.

Our culture has spoken of this phenomena for ages.  Movie stars, sports stars or rich guys have had women latching on to them not necessarily for their good looks or spectacular conversational skills or humanity.  What Trump stated here was essentially true and we all know it, so what are you in a tizzy about?

What the Left does not discuss is the second and more important issue – why do women behave like this and is it possible to ever change it?  Certainly, in this age where Americans walk around with a falsely-inflated level of self-esteem created by a childhood of indulgence, one might think women would have moved on from this misguided behavior.  On the other hand, it may never stop as some women will always be looking to use their sexuality to gain advantage over men who are instantaneously interested in sex.

One must separate the disgusting behavior of some men forcing themselves on women from the women who look to have lurid interludes with rich and/or famous men or get them into a more permanent relationship because of their fame or money.

I have not read one column addressing this issue and the need to change the culture so that women will not be interested in this (If you have please forward it to me). The #metoo movement may cut into this, but that focuses more on the women who have been abused sexually. It is not focused on addressing the issue of female self-respect.

We must acculture the females in our society to not being sexually abused and accepting it, but also to not selling themselves to men for fame, fortune or simply bragging rights.  We know that will not stop for everyone, but at least we can raise the bar.