Should I Be Offended by Trump’s Attacks on the Press?

Bruce Bialosky
|
Posted: Mar 12, 2017 12:01 AM
Share   Tweet
The opinions expressed by columnists are their own and do not necessarily represent the views of Townhall.com. 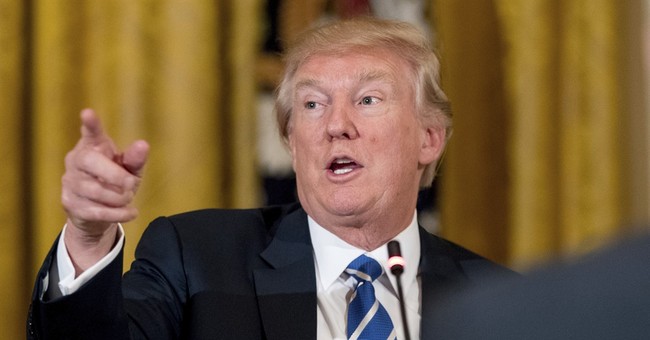 As you know by now, President Trump has not been to cordial to the press. He sent them into the stratosphere when he tweeted (now deleted) “The FAKE NEWS media (failing @nytimes, @CNN, @NBCNews and many more) is not my enemy, it is the enemy of the American people. SICK!” Some might question why he left out the Washington Post. The question is why as a journalist am I not more upset?

It might be because of how I came to what I do. I have never been a full-time journalist, though I have been writing for publications for 35 years. Thus, I have never had to sit amongst other journalists and listen to their banter. I just do what I do. I know what it is to be suppressed by the government from writing. I was restricted by the Bush Administration from writing while I was a presidential appointee from 2005-2008. In that time, the world had changed and I went straight to writing principally for Townhall. Let me be clear, I consider myself as serious a journalist as anyone who works for any of the news organizations mentioned above.

There are three primary reasons I have not set myself on fire over the president’s tweet:

1. If you watch, listen or read any center/right-of-center news, you will read or hear a constant refrain: Republicans get treated by the press differently than Democrats. You have heard it many times yourself, but stop and think about that for a moment. Every one of the experienced journalists say this matter-of-factly. But why should that be? Isn’t that testimony enough there is a problem with the press not being objective?

The fact that we have a president who is willing, if unartfully, to call the press on their behavior inspires some of us.

2. The attacks on Trump have hit a new level of being unfair and lacking impartiality. In just one day at the Washington Post, the opinion pieces included these statements: 1. I Didn’t Think I Would Ever Leave the CIA, but Because of Trump I Quit; 2. The Trump White House is Cooking the Books; 3. The Terrible Consequences of Abandoning American Exceptionalism; and, 4. Is Anyone Home in Trumpville? I know the authors do not write the titles for publication like I get to do, but this is a daily occurrence in the Washington Post. Most days it mirrors the rest of the paper which is a full-throated attack on Trump with a very occasional bit of applause.

The Jewish press is even worse. I only read the Los Angeles Jewish Journal and The Forward. But to give you a sample of The Forward, the lead article was recently titled “Is Donald Trump Too Ignorant to Deal with Israel and the Middle East?” That is what you see in your email box.

These attacks have gone on all during the campaign and worsened since Trump won the election. There is not even an inkling of news objectivity. The Washington Post -- owned by a guy who will sell anything and has been chronicled as being an absolutely terrible boss -- has spent the last 180 days disparaging Trump in any way possible. I spend most every morning horrified by the daily display of hate.

Then there is the total lack of objectivity. Ana Swanson’s recent column, Trump Is Upset the Media Is not Reporting a Meaningless Statistic about the National Debt, is a small thing, but defines that. This column was about how Trump was touting a $12 billion reduction in the national debt in January. If it were another president, they would have never wasted ink on this minor comment. This same newspaper never questioned President Obama on sticking his $900 billion wasted stimulus into Bush’s last fiscal year and cooking the books as if the huge deficit preceded him. That was really cooking the books. The Post wasted ink on this overly-detailed analysis of President Trump’s comment. They appear to want to attack him any way they can over anything he says.

3. The press only wants to recognize their own gang. Anytime I try to interview someone and tell them I write for Townhall.com, they roll their eyes expressing their lack of acceptance of us as “real” journalists. If I stated I wrote for the Montana Standard from Butte, they would have greater respect. That is despite the far greater reach my columns have and that not many read the Montana Standard (no offense intended).

When I tried to get credentials for the national conventions in the past two cycles, I had to go through other journalists. They were very protective of the club. That is why they were so upset when members of the club were not included in a recent press gaggle. Or when Press Secretary Sean Spicer spoke of moving the press briefing to a larger room. The establishment press likes their seats in the squeezed press room in the White House that they can control. That don’t want pond scum like me allowed in the seats they have worked so hard to control. That is why MSNBC anchor Mika Brzezinski recently slipped and said about President Trump “he could have undermined the messaging so much that he can actually control exactly what people think. And that, that is our job."

President Trump saying the press, even the pack he chose to attack, are enemies of the people was way out of line. But for members of the press or the Left to scream about losing the First Amendment is ridiculous. James Fallows -- a serious journalist -- did an extended essay on this subject for The Atlantic. He ended his piece by stating he would not draw comparisons to reporters in Germany in the 1930s. But he went on and quoted Hannah Arendt:

“The moment we no longer have a free press, anything can happen. What makes it possible for a totalitarian or any other dictatorship to rule is that people are not informed; how can you have an opinion if you are not informed? If everybody always lies to you, the consequence is not that you believe the lies, but rather that nobody believes anything any longer. This is because lies, by their very nature, have to be changed, and a lying government has constantly to rewrite its own history. On the receiving end you get not only one lie—a lie which you could go on for the rest of your days—but you get a great number of lies, depending on how the political wind blows.

Mr. Fallows, you did draw a comparison by ending your column with that quote. That is exactly why I have little sympathy for the press that continues to have little objectivity and constantly lurches into death-spiral hyperbole.

My conclusion is for the press to stop whining and do your job for the first time in ages. Stop attacking the president for everything he does and every way he does it. Let me know when the Trump administration actually does something, like when President Obama investigated the very fine journalist James Rosen of Fox News with the Justice Department and reviewed his emails and phone calls.

Then I will be really concerned. Until then I like President Trump beating up on these guys.