Bruce Bialosky
|
Posted: Aug 21, 2016 12:01 AM
Share   Tweet
The opinions expressed by columnists are their own and do not necessarily represent the views of Townhall.com. 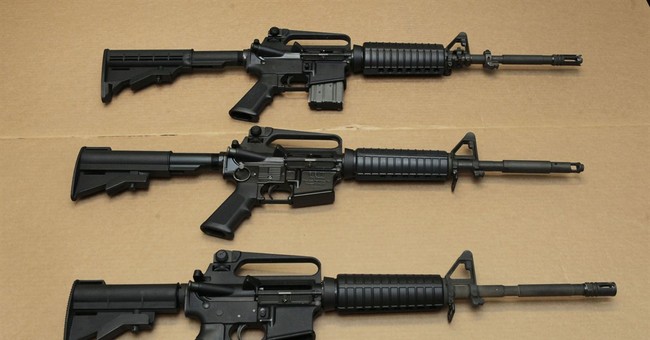 After the massacre of gay Americans having a good time at an Orlando nightclub by an Islamic terrorist there were vivid discussions about people owning an AR-15 -- the principle long gun in use in America -- despite the fact that it was not the firearm used by the murderer. For some the discussion immediately lurched to gun control, but a lot of people had very little knowledge to support their arguments. I thought we should take a look at the AR-15. (Note: I am neither a gun owner or member of the NRA.)

Another issue about the gun came to light as a friend of mine told me “no one needs an AR-15,” which has become an oft-used statement by the unknowing. I asked him if he had ever asked someone why they would want to own the gun. The answer was no, so I thought I would ask some people for him, since I expect that he did not engage gun owners.

The AR referred to in the gun’s name comes from Armalite Rifle, the original manufacturer. The gun was redesigned in 1964 to become the U.S. military’s M-16, which has been the common gun used by U.S. soldiers since that time. Thus, this gun was originally designed for civilian use. The M-16 has been redesigned to become the M4 carbine, which is in use by the U. S. military today.

Military-type guns can be “select-fire.” They can shoot as “fully-automatic,” which means once you pull the trigger and hold it back the gun will fire until the magazine is empty. Or you can adjust it to semi-automatic mode, which means you must pull the trigger each time you want to fire a round.

That is the main difference between military-style guns and ones owned legally in the U.S. by private citizens. The AR-15 can only be fired semi-automatically. Semi-automatic technology has been around for over 100 years and is the way the vast majority of guns are made in the United States. A revolver, which is the kind of handgun you would see in a Western used by Wyatt Earp, is the kind of old-style technology that would cause someone to cock the trigger then pull each time and so a new round would load and fire.

People who do not like AR-15s refer to them as either an “assault” or “military-style” rifle. They are neither. In fact, since the early 1990s, the gun has been the most-frequently-used rifle in marksmanship competitions. It is also the most-frequently-used rifle for defensive usage. One of the primary aspects of the gun’s popularity is it can be designed for multiple purposes. Those who don’t have experience with guns may not understand the value or the benefit of a gun that can be that adaptable. But it is not legally adaptable to be fully automatic.

Why would someone want to own such a gun? I interviewed six owners of varying ages and backgrounds -- all were male. They vary in age between 34 years old and 63 years old. They also vary in how long they have owned guns to between being a recent gun owner to one who has been active with guns for over 50 years. They all go shooting regularly to burnish their skills and stay fresh with their guns. For most shooting is a hobby. There was a consistent characteristic – the AR-15 was not their first or only gun. Many people think of someone being a gun owner as having one gun. All of these people and many other legal gun owners have multiple guns. Each person I spoke to had both handguns and long guns (rifles).

Why the people acquired an AR-15 varied. Interestingly, a few mentioned that they thought the gun was a good investment. C.J. told me he felt all his guns were good investments. He has owned guns for 14 years and has found his guns to have gone up in value. He has sold a few of his guns in the past and has always done it in compliance with California law, which requires the sale to go through a licensed dealer.

Tony called the AR-15 “The Harley Davidson of rifles.” It is the premier American-manufactured long gun. He, like C.J., had great things to say about the gun. He mentioned what a few people said -- that the gun is very adaptable.

One drawback is that the gun needs to be cleaned and maintained regularly, as Neil brought to light. Most experienced gun owners would see cleaning as a normal part of gun ownership. The comparison here is to the Russian-designed AK-47, which operates reliable under most conditions.

Zvi stated he acquired his AR-15 for its ease of handling and affordability. He is a more recent gun owner, but “loves it.” Gabe bought the gun because of his work in a gun-related industry. He found it to be “fun and very entertaining.” Gabe also agreed that his experience is that the gun is very versatile. Neil called it a “great defensive weapon.” Neil called the AR-15 the “gun of his generation” since it was used by almost all soldiers from the Vietnam War through Iraq.

One of the well-known attributes of the gun is it has very little recoil (kickback), especially for a long gun. This characteristic makes it easy to use and increases the accuracy for the shooter. This is directly in contrast statements written in the New York Daily News column by Gersh Kuntzman, the reporter who shot the AR-15. His description almost makes one believe he made up the whole story; it was so contradictory to fact.

Most studies have shown that the law-abiding citizens love this gun and the people I interviewed validated that. Hopefully, this column will help to explain why people like this gun and want to own it for legal use.

Only 2-3 percent of crimes/murders are done with long guns. It brings to question the campaign against them. The hot rhetoric against them is neither warranted nor going to solve the problem of illegal gun use.