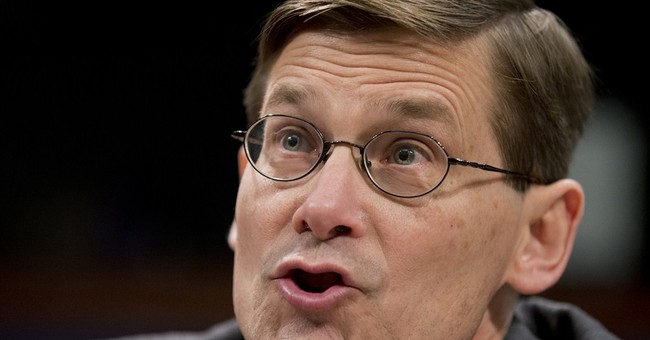 Michael Morell, the former deputy director of the CIA, has been out pimping his book The Great War of Our Time in which he spends 47 pages massaging the issue of Benghazi. I have not read the book, but I did read his recent column in Politico. If his book is anything like his column then it is clear we still need to dig deeper as to what happened and what was done by the U.S. government.

Morell did not stoop as low as Julian Castro, current HUD secretary and prospective running mate for the anointed Hillary, in his comments about what happened. Castro practiced being a political hack by attacking Trey Gowdy, Chair of the Select Committee on Benghazi, and stating that Benghazi had been investigated to death (no pun intended). Yet I still have unanswered questions and I am sure Chairman Gowdy does also.

Morell started his column by attacking the press for their lack of understanding and sophistication regarding how things work in the “Intelligence Community.” He chided the press for their analysis of a report just released through the efforts of Judicial Watch that brought a conclusion that the Defense Intelligence Agency (DIA) knew ten days in advance of the potential attack on Benghazi. He then defines the chaotic nature of the attack as proof there was no long-term planning.

He may be correct about that analysis – or he may not. What he does not say and I asked over a year ago was what was done in preparation for attacks on any of our facilities in the Middle East on 9/11/12. He has never answered that question nor has the former Secretary of State Mrs. Clinton. If they had a clear plan to defend our facilities, all they have to do is roll out the directives that were issued to state that a list of procedures should have been done to heighten security and protect our personnel. If you buy Morell’s explanation that what happened in Benghazi was not a planned, coordinated attack, then he should be able to explain how a group of ragtag misfits were able to overrun an American facility housing the Ambassador to Libya on 9/11/12. Yet he has not nor has anyone else.

Then Morell goes on to speak about the attack itself and the indictment of the one person (Abu Khataala) who has been charged in the attack on the Benghazi facility. It speaks of the fact that a Grand Jury did not cite any planning prior to 9/11/12 in the charges against him. He states that the “Intelligence Community” concluded that attackers were motivated by the attack that happened earlier in the day in Cairo.

Whether that was the reason or others that Morell cites, including the infamous video, the next major question that has never been answered comes to the fore. There was a violent disturbance in Cairo related to our embassy. It was 9/11. The fear we have of a group using the date as an excuse to threaten our personnel and facilities had already been manifested. Exactly what communications went out to our embassies around the world, and particularly in the dangerous areas in the Middle East? What procedures were put in place? Why was our ambassador in Libya (right next door) not put on lockdown as it was obvious that the Cairo attack might metastasize throughout the region?

It would only make sense that someone from the Administration and/or Secretary Clinton would produce communications that directed protection of Americans. Yet, they have not as of two and one-half years later, so the only conclusion that can be drawn is that inadequate measures were taken. Certainly Morell does not state anything in defense of the Administration or State Departments’ actions. Clinton’s wild statement “What difference does it make” has relevance for protection of our other personnel in Libya, Algeria, Tunisia and Morocco and Nigeria.

I interviewed Jaime Manzano, a retired professional from the diplomatic corps. Manzano was a long-time family friend of Chris Stevens (he went to college with Stevens’ parents.) Prior to Stevens’ murder, Manzano had corresponded with Stevens about Manzano’s detailed thoughts of how the use of embassies and the foreign service needed to be updated as resources are being spent all over the world in much the way we have done so for the past 100 years ago.

Manzano told me Stevens did not agree with all the points made in a memo sent to him, which information was provided to me in a like memo. Stevens stated he wanted to chat about it upon his next trip to the states which unfortunately never occurred.

What happened in Benghazi still has many unanswered questions. Chairman Gowdy still has a list of his own. These are not trivial or partisan. They are questions affecting the future of our diplomatic missions and the defense of our personnel. Manzano’s questions about what our purpose should be comes from someone with first-hand experience and need to be answered as well.

Sweeping this under the rug will harm Americans in the future and the truth needs to come out about what happened. We have waited too long because certain people are more interested in their political positions than the safety of our diplomats.