Global Warming: They Will Never Be Convinced 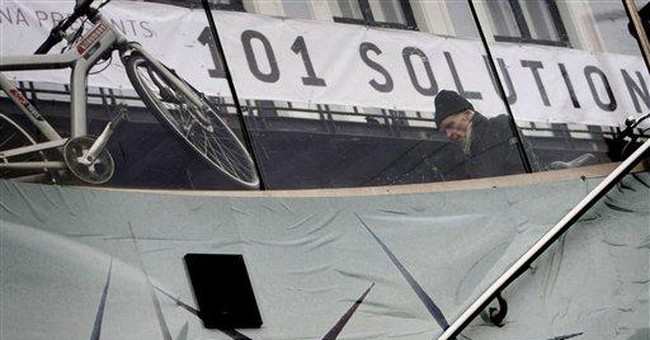 The release of some 3,000 emails hacked from the Climate Research Unit at East Anglia University illuminates the true intent of those in the forefront of one of the most complex scientific and political issues of our times: “Global Warming” (or, if you prefer, “Climate Change”). Never before have a small number of academic elites convinced the global political and media establishment to embrace such a large-scale alteration of our existence. Certainly nobody has ever been brazen enough to attempt this without the fundamental scientific pillars of transparency, informed debate, and consensus.

The fact that these emails became public was itself an anomaly. Releases of this kind always seem to be from the Left; it’s one of the tactics they employ to attack their political enemies. From the time of the Pentagon Papers, publications like the New York Times have reveled in releasing secret information that supposedly exposes the duplicity of the Right. During the Bush Administration, secret CIA documents repeatedly found their way to the front page of the Times, bringing justified concern to an Administration struggling with challenging defense and foreign-policy issues.

Speaker Pelosi’s reaction is to call it “E-mail-Theft-Gate.” The elitist media has refused to print a single word about the controversy as ABC, CBS and NBC have completely skipped the subject despite the suspension of the lead scientist at East Anglia. These are pristine examples of the utter hypocrisy of the Left. When their opponents are “exposed,” they scream about the issue; but when their political allies are exposed, they scream about the process. (You’ll notice the same reaction to the ACORN video clips.)

Yet as devastating as the emails are to the “cause” of global warming, equally troubling are the shameful personal attacks on individuals, mostly dissenting scientists. This has been behavioral norm for the Left. “What happens in Vegas stays in Vegas” was the rule except when an icon of the Right – William Bennett – could be humiliated. Last-minute campaign attacks, like the one that harmed Bruce Herschensohn in 1992 and placed the leftist Barbara Boxer in the U.S. Senate for the past 18 years, have become standard behavior for the Left and its allies in the mainstream media.

Those of us who have lived our entire lives with this can relish the fact that the tables have been turned on the Left on an issue they consider not just a cause, but a religion. It is a moment where you just want to grab one of the True Believers of global warming and watch them squirm right before your eyes.

How come I feel so empty though? How come I feel that it is a waste of time? Is it because we’ve all seen this movie before? Having persistently tried to confront the True Believers with contradictory evidence and suffered only indignities, why would this time be different? Facts clearly do not matter to these people.

As we all know, this started with Al Gore and his obsession to suppress all opposition. From his days in the U.S. Senate, through his world tour with The Inconvenient Truth, he has always mocked anyone who could possibly contradict his statements. To his wide-eyed followers, the fact that he repeatedly refuses to debate anyone on the issue does not undermine his integrity one bit. It’s amusing that the conqueror of Ross Perot refuses to get on the same stage with the meager Professor Richard Lindzen from M.I.T.

A couple years back, Australian Dr. David Evans was the first notable individual to flip sides on the issue. Dr. Evans had been the Australian point man back in the late nineties for the Kyoto treaty. Ten years later, he wrote that his scientific research established that not only had the basic principles of global warming been brought into question, but that the earth was actually cooling.

I forwarded this article to some friends and family across the political spectrum, one of whom is a liberal Democrat. He informed me that he was sent articles like this regularly (despite not hobnobbing with Republican types), and that he totally disregarded them. This particular article, dense with scientific facts, was just blithely dismissed out of hand. The resulting (heated) exchanges nearly caused a world war in the family.

In the following days, I received a flurry of emails from him and his allies swearing allegiance to the cause of man-made global warming. Not one of them contested the facts substantiated by this serious scientist. Over and over, I attempted – without any success – to bring them back to the article and asked them to refute specifics. That a significant supporter of man-made global warming was now calling the entire issue into question did not matter. It’s ironic – and a little depressing – that intelligent people who argue that science is on their side refuse to accept the scientific method when the issues are in dispute.

With the release of the emails, which reveal that their scientific icons have been gaming the system and suppressing contradictory evidence, you would think that the True Believers would be calling for heads to roll. By any reasonable measure, they should be screaming about being used and manipulated.

The True Believers have yet to be publishing any comments calling for reconsideration. There is no outcry about the rampant abuse of science that has undermined the creditability of the entire global warming community. Incredibly, the only notable response has been President Obama stating he will fly to the Copenhagen and promise a 17% reduction in U.S. greenhouse gases.

It’s now pretty obvious that re-educating the global warming True Believers would be a fruitless exercise. They want us driving Mini Coopers (or riding bicycles), fueling our houses with $40,000 solar panels, and living in cities where we can walk to work. They want to control every aspect of our lives.

As the elite intelligentsia gather in Copenhagen sleeping in their $900 hotel rooms, driving around in their chauffeured driven limousines shipped in from Germany to accommodate the excessive demand and they wine and dine on OPM (other people’s money), their true essence is exposed in manners never seen. The proletariat has morphed into the bourgeois and now wishes to control the world through a false science that will accomplish their goal of stifling man’s advancement shrouded in a scientific cause.

Our only hope is to convince clear thinking, common sense Americans that these people need to be stopped before they destroy our way of life.