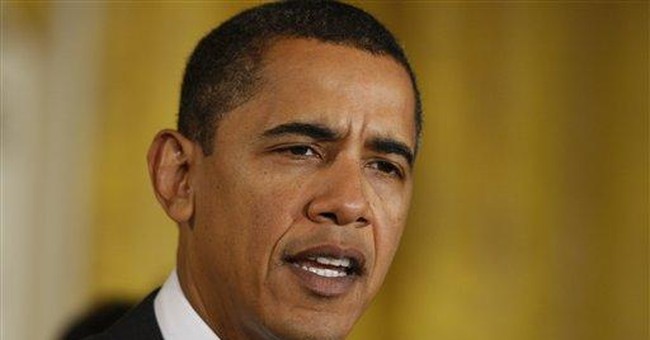 Our new president promised to hit the ground running and he certainly did. He started by eviscerating the first amendment of our Constitution while protecting the rights of foreigners accused of terrorism against the United States. That, people, is a leftist home run.

His Eminence did not technically attack the first amendment. As a supposed constitutional scholar, Mr. Obama knows that the first amendment states Congress shall make no law respecting the establishment of religion, or prohibiting the free exercise thereof, or abridging the freedom of speech or of the press, or the right of people to peaceably assemble, and to petition the Government for redress of grievances. Thus, as president, the amendment does not actually state his position. We can assume that when he restricted by executive order the right of lobbyists to work in his administration, the executive branch is covered by this annoying little clause in the first amendment.

For some reason, the Democrats have wanted to make believe that there are only four rights protected in the first amendment. They have made "lobbyist" a dirty word -- apparently worse than "Gitmo" to them. Each time a new Democratic Administration comes in it, they blabber about the hideous people who actually speak for the interests of the American people.

Let us just have a short primer on what lobbyists actually do. They represent every interest in the United States from the bowlers of America, to the nurses of America to the soybean growers of America. The average citizen of this country has no ability to have his/her interests presented to a congressman, let alone the President, without having those interests presented by someone who knows the ropes of the Washington D.C. establishment. Anyway you cut it, that is what lobbyists do – petition the Government for redress of grievances.

Why the Democrats have such a problem with this function is unfathomable. Most times elected officials complain about the lobbyists that do not represent their pet interests. But in the case of the Democrats hobnobbing with Big Labor or the Environmental Lobby, that is quite fine by them.

Mr. Obama's proposal is preposterous. He states that he does not want anyone who has lobbied for the last two years to work in that area of the administration. That means if you are a financial expert you can work at the Interior Department, but not the Treasury. The silliness of the idea was displayed by Obama having already broken the rule by nominating William Lynn, a lobbyist for Raytheon, to be deputy secretary of defense.

Mr. Obama then wants to restrict what people can do for a living once they have left his administration. That means if someone leaves the Commerce Dept., they cannot help their successors and must go into something like teaching or becoming a gardener. With these rules, plus the attacks on government employees' character (like what happened to Scooter Libby), it will soon become totally ridiculous for anyone of significant talent to work for the federal government. In effect, what do you need this for – sacrificing your income for multiple years to have your character questioned, and then not being able to benefit from your knowledge once you return to private industry. As much as I love this country, the current state of affairs would not cause me to work under these conditions.

But was there any mention of this attack on the first amendment from the left? Not if you watch their in-house networks: MSNBC or CNN. They skipped right over that to applaud the proposed closing of Gitmo. They could not get enough of the end of that era. What to do with the terrorists still there was easy for these wise heads. Let's stick the terrorists in a flyover state like Kansas. The only real person who ever went there was Truman Capote. Never mind that citizens live right near where these questionable persons are to be dropped.

As the talking heads of MSNBC and CNN applauded the proposed transfer of the terrorists to a place they would never go, the rights of these people to not be tortured was applauded. Most importantly they continued to perpetuate the myth that torture does not work. Whether or not you believe the United States should be allowed to torture highly valued targets, please do not fall for this ridiculous argument that it does not work. It defies logic. Just ask yourself as to why it continues to be used for centuries by governmental and non-governmental entities like the Mafia. The Mafia may do it because they are sadists, but they also do it to gain information. While it may not work on rare occasions, it does work. To continue to state it does not work is just plain silliness. It is another instance where the left believes if they repeat a lie often enough it will become the truth.

Just to review, our new president attempted to gut one of the five rights provided in the first amendment, decided to move dangerous terrorists to American soil and to give them show trials to protect their rights and, most importantly, restricted methods used to gain useful information to be used to help win the war on terror. What an amazing start to what may prove to be a long four years.