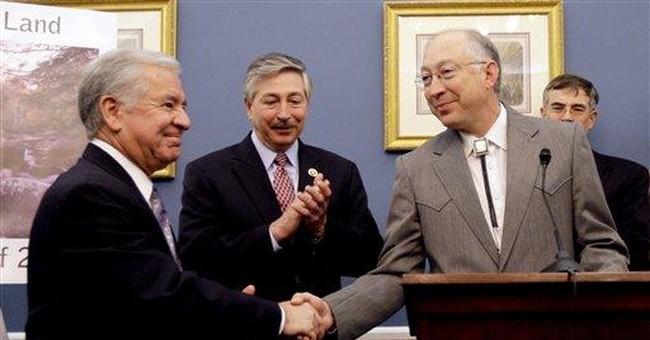 Coloradans are tired of Salazar’s behavior in Washington and won’t be fooled by his attempts to rebrand himself as an independent.  His reckless D.C. habits – among which he approved $1.2 trillion in new spending – are outshined only by his failure to help constituents back home.  Unemployment has increased 48% since Salazar took office and more than 75,000 jobs have been lost.

Scott Tipton’s small business experience is exactly what is needed to get our economy back on the path to recovery.  On November 2nd, voters will take to the polls and send one of Pelosi’s Puppets home to Colorado for good.

Colorado’s Third Congressional District’s terrain is as rugged and independent as the miners who founded it, stretching from the Continental Divide to the Book Cliffs of Grand Junction, incorporating former frontier towns, working class areas and bustling ski resorts. While Democrat John Salazar represents the Third Congressional District, this region is Republican leaning, with a Cook PVI Rating of R+5, and has a proven record of voting for Republicans. In 2004, George W. Bush received 55 percent of the vote and in 2008 John McCain won the district with 50 percent to Obama’s 47 percent. Prior to John Salazar, Republican Scott McInnis held this seat for over 10 years. But a leopard can’t change his spots and the voters will now see Salazar for what he is: a down-the-line Pelosi Democrat that pretends to be a principled moderate but never fails to vote with the Democrat leadership.

Democrat incumbent John Salazar has represented Colorado’s Third Congressional District since 2004. A so-called Blue Dog Democrat, he claims to be independent-minded, but is one of Nancy Pelosi’s most loyal lapdogs, voting with her 97.1 percent of the time. Salazar voted in favor of the Democrats’ government healthcare takeover, a bill which the majority of Colorado voters adamantly oppose, and even backed the “stimulus” package, which stimulated the size of government rather than the economy and failed to create the jobs Pelosi and company promised. Salazar has refused to take accountability for his record and has avoided his constituents as a result, but this fall Salazar will not be able to run away from the anti-Democrat political environment favoring Republicans.

Scott Tipton, the Republican challenger, is acutely aware of the toll the Democrats’ spend-and-tax policies are having on small businesses – the engine of our economy. A lifelong resident of Colorado, small business owner and state representative, Tipton knows what it takes to create jobs and get the economy back on track. He has worked to generate jobs, help ensure the safety of Colorado families and improve the overall quality of life for Coloradans. After graduating college with a political science degree, Tipton started a small business that molds custom made Native American pottery sold in national parks all over the country. He first got involved in politics by volunteering for Ronald Reagan’s 1976 and 1980 presidential campaigns and his small business background prepared him to serve in the Colorado House of Representatives where he sits on the House Agriculture Committee, Livestock Committee, Natural Resources Committee and Local Government Committee. Tipton knows how to make the tough decisions, from balancing a budget, to reducing spending and creating the economic growth that will allow small businesses to flourish.

This November, Colorado voters are faced with an important choice. They can elect partisan Democrat John Salazar who is desperately trying to run away from his record, or Republican Scott Tipton, a proven leader that has years of experience in creating jobs, reining in excessive spending and who will offer commonsense solutions.