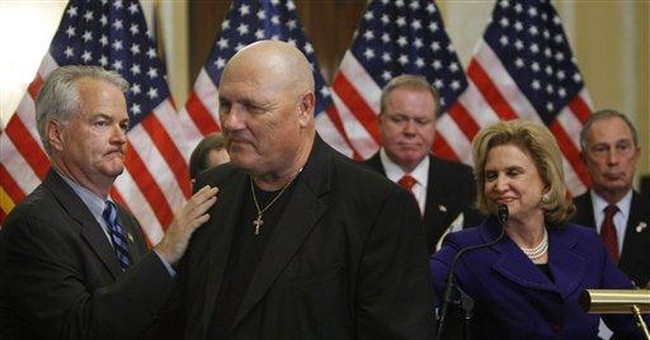 New York City is known for a rich history, a diverse set of cultures, and a mean toasted bagel.  Though some parts of the city are definitively blue, much of it is politically unpredictable.  New York’s 13th Congressional District, for example, doesn’t always follow the rest of the trends within the city.  Since the incumbent Democrat won the seat in 2008 after the district had sent Republicans to Congress for over a decade, the seat will be one to watch this fall when the free-spending Washington politician Mike McMahon will be receiving his pink slip.

The 13th Congressional District spans several boroughs in the southeastern portion of New York, including Staten Island.  The district also includes some Brooklyn neighborhoods with similar backgrounds.  Residents here tend to be more conservative than those in Manhattan across the water.  The area has voted to send Republicans to the White House in recent elections, and it has a Cook Partisan Voting Index of R+4.  In 2008, McCain took the district by two percent, while Bush won with ease in 2004, taking the district by 10 points.

Democrat Michael McMahon’s election in 2008 is attributed more to the absence of a strong Republican opponent than the region’s support for his big spending, high taxing agenda.  Elected on a commitment to be a moderate Democrat in this traditionally right-of-center district, McMahon’s voting record shows his loyalty to Speaker Pelosi.  He has been a reliable and consistent party-line vote in the House, standing with his Democrat bosses over 92% of the time and throwing his support behind the failed trillion-dollar stimulus bill that did nothing but add to our debt.  For a representative who was supposed to fight to balance the budget, McMahon has gone along with his party’s reckless spending that has piled up more and more backbreaking debt.  His constituents also got a clear picture of their representative’s out-of-control behavior this summer when, as McMahon’s political future became increasingly clouded, he attacked his opponent for accepting too much “Jewish money”.

Republican challenger Michael Grimm has a proven track record of public service for both the country and New York.  Working 11 years as an FBI agent, he fought relentlessly to “drain the swamps” of Wall Street as he chipped away at corruption.  Grimm, true to form, is fed up with the irresponsible, out-of-control spending that has defined this Democratic Congress.  He believes that lowering taxes -- not bloated “stimulus” packages – is the way to boost the economy.  Because he believes in fiscal responsibility and limited government, Grimm will take a stand against measures like the national energy tax, and he’ll work to restore the integrity of Congress and elected officials.

This past Tuesday, Grimm defeated a strong challenge from a high-quality primary opponent by almost 40 points.  That enormous margin of victory can only happen with a strong, tenacious grass-roots campaign, broad-based appeal and winning message.

On November 2nd, voters in the 13th Congressional District can tell party-line Democrats both at home and in Washington that they’re fed up with their out-of-control agenda and have learned from the mistake they made in 2008.  They can do so by sending Michael Grimm down to Washington, D.C. because he’ll fight for their interests, and he’ll stand by his commitment to reign in such radical spending habits in our nation’s capital.