Race of the Day: Pelosi Puppet Betty Sutton in Trouble 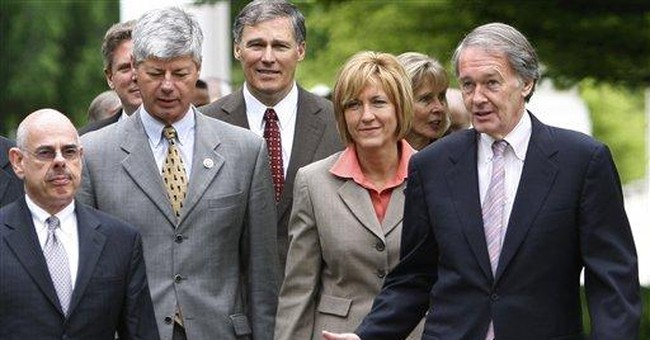 Ohio is positioned to play a large role in National Republican Congressional Committee efforts to take back the majority in Congress. Even in Democrat strongholds across Northeastern Ohio, we have top-notch candidates mounting vigorous challenges against partisan incumbent politicians like Betty Sutton in OH-13.

Businessman Tom Ganley is prepared to successfully capitalize on the voter frustration aimed at Washington in this competitive match-up. Sutton’s record as a Pelosi loyalist shows how out of touch she is from Northeast Ohioans who want jobs, not higher taxes and more big-government spending.  Ganley is a businessman who created more than one thousand jobs running Ohio’s largest automotive group.  While Tom plans to put his experience to work in helping to turn the economy around, Betty Sutton continues to vote in lock-step with Speaker Pelosi on issues like the failed stimulus, job-killing cap-and-trade legislation and a government takeover of healthcare.

Sutton won this seat in 2006 when Sherrod Brown decided to run for United States Senate.  Since then she’s held this D+5 seat in northeastern Ohio with little challenge.  In Ganley, Sutton faces one of her toughest general election fights.  The district includes portions of Lorain, Cuyahoga, Medina and Summit counties.  On the outskirts of Cleveland, OH-13 runs narrowly north-to-south encompassing the towns of Akron, Brunswick, Strongsville and Lorain.

Proving that even a deep blue district like this is within reach, a recent poll showed this race to be competitive with Ganley leading by three points.

Not only is Ganley a job creator, but he also holds a deep commitment to his community, and he demonstrated this value by putting his life on the line to help rid Cleveland of “The Mob.”  After repeated blackmail attempts on his business, Tom went undercover for two years working for the FBI and, as a result, he helped put in jail more than 20 mobsters.  Watch Ganley this story and talk about his efforts on FOX News’ Huckabee and learn more about the operation here.

After helping to take down the mafia in his home town, Ganley is certainly not afraid to roll up his sleeves and tackle the problems in Washington.  His opponent, Betty Sutton, earns one of the highest partisan rankings in Congress by voting with Speaker Pelosi 99.1 percent of the time, a record that Ganley believes is not only out of touch but it also has failed to put people back to work. Initially, respected political handicapper Charlie Cook considered this seat safe for Democrats, but since Ganley’s entrance he moved it to a competitive category, “lean Democrat.”