Brian McNicoll
|
Posted: Nov 13, 2017 11:31 AM
Share   Tweet
The opinions expressed by columnists are their own and do not necessarily represent the views of Townhall.com. 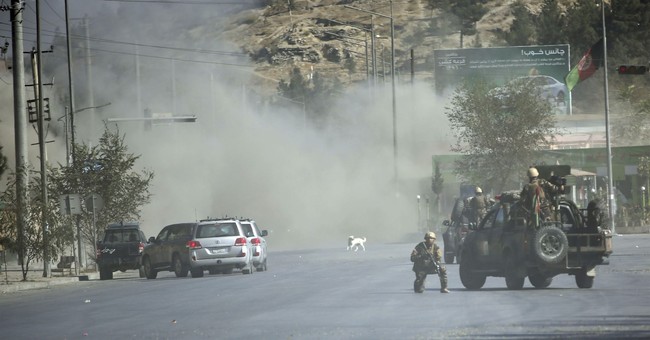 That’s the theory a bevy of government contractors with questionable pasts are using to get back into the game – and it’s working.

President Trump’s term has consisted of cleaning up messes from the previous administration and draining the swamp, but in this case, he’s only halfway there.

The State Department is signing contracts to upgrade security at buildings and other facilities around the world – in part in response to the Obama administration’s neglect that led to the death of four Americans at Benghazi. This is good.

But of the $10 billion authorized for the increased security, nearly 30 percent has gone to two contractors whose past misdeeds raised ethical and legal questions.

Aegis Defense Services signed a $1.3 billion contract despite accusations of “tactical incompetence” when it last protected diplomatic installations in Kabul.

Private guards working for Aegis in Kabul complained guards there were inadequately trained, particularly in the use of their weapons, and that the force was dangerously overextended and understaffed.

Things were so bad that 40 members of the embassy’s Emergency Response Team submitted a petition to the U.S. State Department and to Aegis expressing a “vote of no confidence” in the company’s leadership in Kabul, citing both tactical incompetence and “a dangerous lack of understanding of the operational environment.”

Two of the signees were fired and claimed their dismissals were retaliation for organizing the petition, and an email obtained by POGO seemed to back this up. “The Regional Security Office in Kabul has grave concerns about the potential and future service of NAME REDACTED,” wrote Stacey Berg of Aegis. “He has demonstrated poor judgment while serving in a critical leadership position. REDACTED was instrumental in leading a baseless mutiny against the senior operational leadership …”

Others who were part of the Aegis network were caught dealing drugs and fired.

When these incidents occurred in 2014, Aegis already was on its second chance with the State Department. In 2009, similar accusations of breakdown of the chain of command, long hours, low morale, poor training and alleged retaliatory firings had surfaced, as well as lurid photographs of guards engaged in nude, drunken hazing behavior.

The State Department, asked to assess the security situation in Kabul after these allegations surfaced,

It has teamed with Pacific Architects and Engineers Government Services Inc. (PAE) on the new contract, even though PAE has had its own problems.

In 2015, the Department of Justice announced PAE and RM Asia had agreed to pay the U.S. $1.45 million to resolve allegations they had participated in a bid-rigging scheme.

PAE had a contract to provide vehicle maintenance and training for the Afghanistan National Army at various sites across Afghanistan. RM Asia supplied and warehoused parts. The government asserted the two firms funneled contracts to relatives and former managers by revealing bid information that gave them unfair advantages in the bidding process over honest competitors.

Two months ago, the Department of Justice announced yet another fine against PAE – a $5 million assessment to “resolve allegations that it knowingly failed to follow vetting requirements for personnel working in Afghanistan under a State Department contract for labor services.”

In this case, in which PAE was providing civilian police in Afghanistan and other countries for counter-narcotics and drug interdiction work, the company failed to perform the extensive background checks on employees that were required under the contract, leaving the force vulnerable to attack from within. The firm was supposed to not only contact third-party references but submit names to the State Department’s Regional Security Office in Afghanistan for additional clearance.

It did not perform either set of checks, but it invoiced the government for having done so. And again, a whistleblower who called attention to the problem was fired and received $875,000 of the fine money as compensation.

Admittedly, it’s not as if the government has hundreds of companies to choose from to fulfill these dangerous and difficult contracts. One can understand the government working with contractors to move them to compliance when possible rather than expelling them at the first sign of trouble.

But for Aegis and PAE, these were hardly the first signs of trouble. They had overworked their employees, shorted their training, mishandled government money, conducted self-serving side deals to benefit friends and relatives in subcontracting and, most importantly, undermined American security.

We know who they are and how we can expect them perform. What we don’t know is why they are back in the game for federal contracts.

This column has been updated.