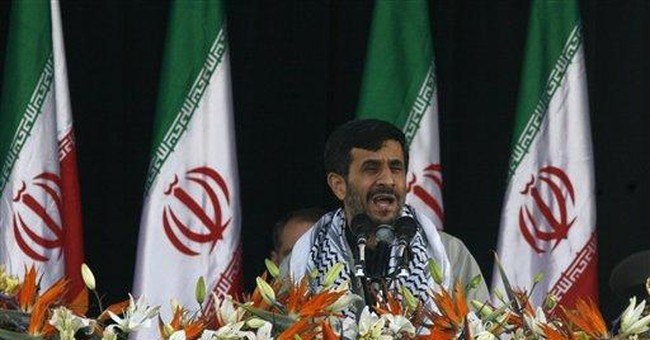 I’d like to make Senator Barack Obama and Iranian President Mahmoud Ahmadinejad a formal offer. Given that the Iranian tyrant is again visiting New York City this week for the United Nations General Assembly, I would like to submit my apartment just a few blocks south of the UN headquarters for consideration in hosting the Obama/Ahmadinejad soiree.

My apartment is a small studio, a bit cramped, but it features panoramic city views. I would gladly move my bed into the hallway to create a little more space, and I would even purchase a new coffee table for the occasion. I’m not quite sure whether I would ever want to return to my home if Ahmadinejad stepped foot inside, but I would gladly relocate in order to expose the utter absurdity of the man and Obama’s suggestion to meet with him.

After all, what does Obama think sitting down with Ahmadinejad will accomplish? Will he look into his eyes, “get a sense of his soul,” and like what he sees? Doubtful. Will he dazzle and inspire with his post-partisan, post-national rhetoric and convince Ahmadinejad that the U.S. sympathizes with him, leading him to behave? Certainly not. Will he convince Ahmadinejad that the U.S. really means business? If that is the case, shouldn’t it be evident without saying so? Yet, not only has Obama said he would meet with Ahmadinejad without precondition, but the Democratic Party platform now calls on him to fulfill this commitment.

Ahmadinejad is a domestic oppressor and a dangerous international menace. He has repeatedly threatened to wipe Israel off the map and called for its destruction. He has denied the existence of the Holocaust and persistently defied international demands to cease uranium production. To be frank, he is an utter disgrace to humanity. But where is the international outrage? Where is the commitment to marginalizing and exposing him? Instead, Ahmadinejad will have a party thrown for him this week at the Grand Hyatt, and when he visited New York last summer, Columbia University provided him a forum to express his deranged views.

Ahmadinejad represents one of the gravest problems facing the world. Unfortunately, he only represents part of an even larger problem, which is the failure of the international community to seriously condemn men of his kind. During the 2006 meeting of the UN General Assembly, Venezuelan dictator Hugo Chavez received a standing ovation after calling George Bush a devil. The New York Sun reports, unsurprisingly, that the current President of the UN General Assembly, Nicaraguan Socialist Miguel d’Escoto, is expected to remain “neutral” this week in addressing the situation with Iran. However, he already said some members of the UN’s permanent Security Council are addicted to war. When a reporter asked d’Escoto if he were referring to the U.S. and whether the same standard applied to Russia for invading Georgia, d’Escoto revealed his loyalties by asking, “You mean Georgia’s invasion into South Ossetia?”

While d’Escoto should also provoke international disgust, he is in many ways an appropriate President of the UN. After all, this is a world where Russia, one of the five permanent members of the Security Council, has obstructed any attempts to impose harsher sanctions on Iran and recently offered to provide Iran with anti-aircraft missiles. China, another permanent member, is developing closer relations with Iran and cannot be trusted, and Western Europe insists on diplomacy destined to fail.

Edmund Burke, the 18th century philosopher from Dublin, once said “The only thing necessary for the triumph of evil is for good men to do nothing.” While I concede that a face-to-face dialogue is not the equivalent of Neville Chamberlain ceding Czechoslovakia, the “something” necessary to stop evil often entails more than diplomacy. With the nuclear clock ticking, time is running out for good men to act.